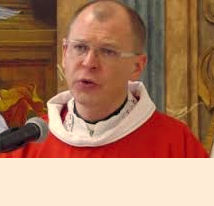 Amantius Akimjak (born in 1961, in Levoča), prof., PhDr., ThDr., PhD., developed contacts with the underground movement in the Catholic church already during his studies at the Faculty of Roman Catholic Theology of Cyril and Methodius at Comenius University (from 1980 to 1985). He conducted the Schola Cantorum, a church choir consisting of theology students. Together with them, he compiled 7 collections of songs with notation for children and young people, which became the basis of a wide-scale popularization of the European version of gospel music at a time when the religious movement could address children and young people only illegally. After graduation, he became a chaplain in Levoča (1985) and the administrator of the parish in Haligovce (1989) and in Veľká Lesná. From 1990 to 2000, he studied at the Catholic University in Lublin, Poland. He was a vice-rector of the Catholic University in Ružomberok and a Dean of its Faculty of Education.