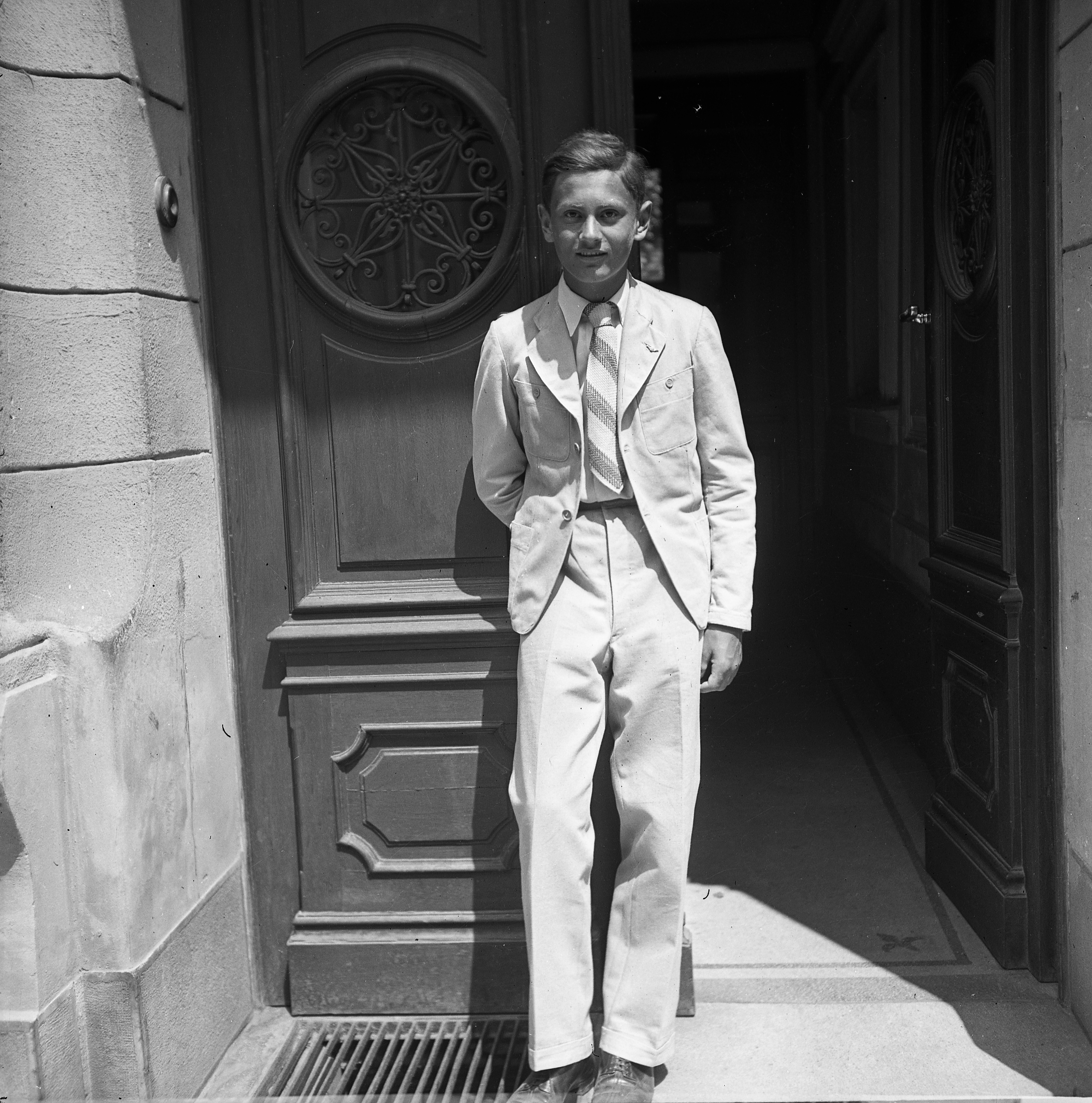 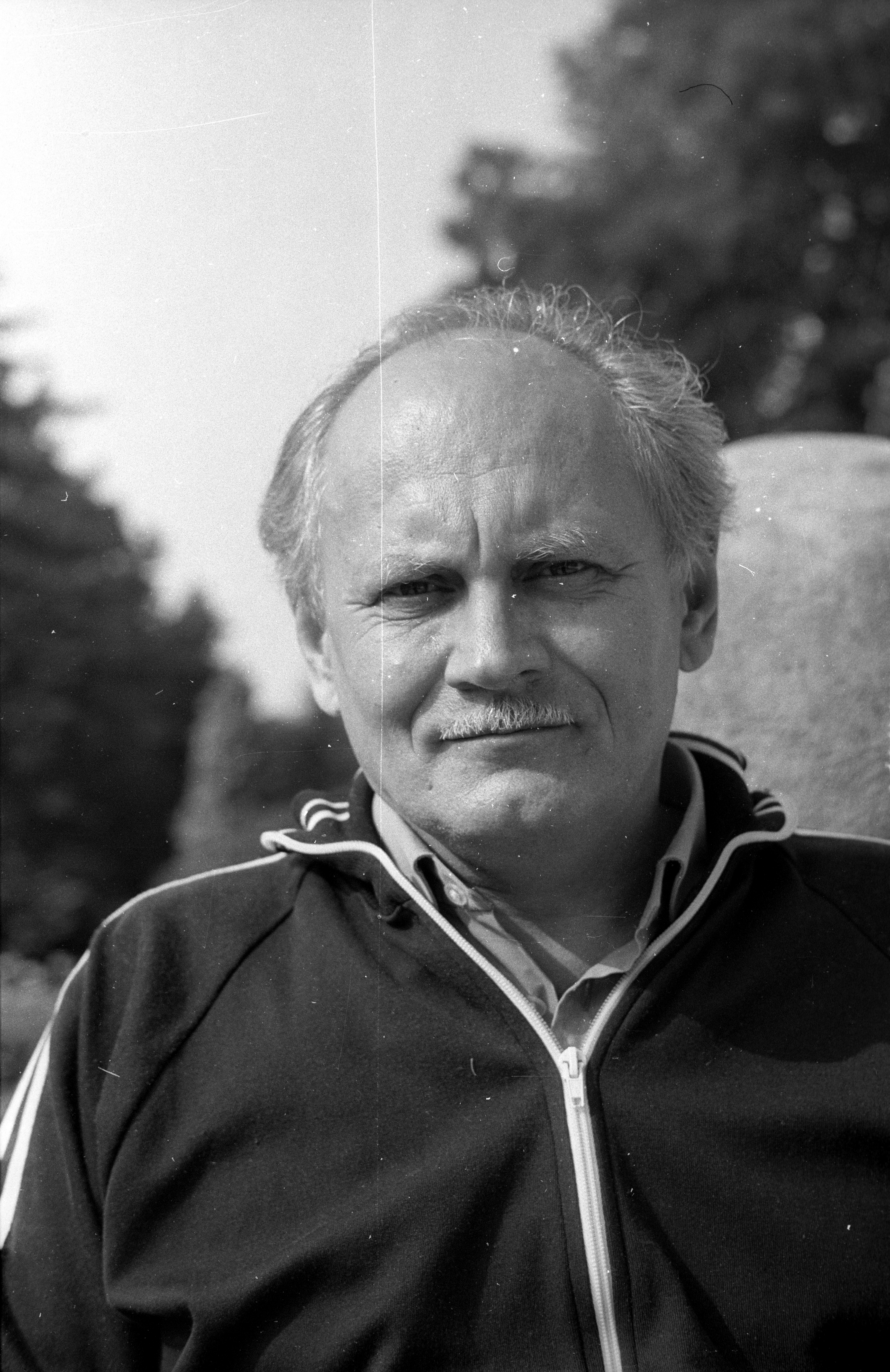 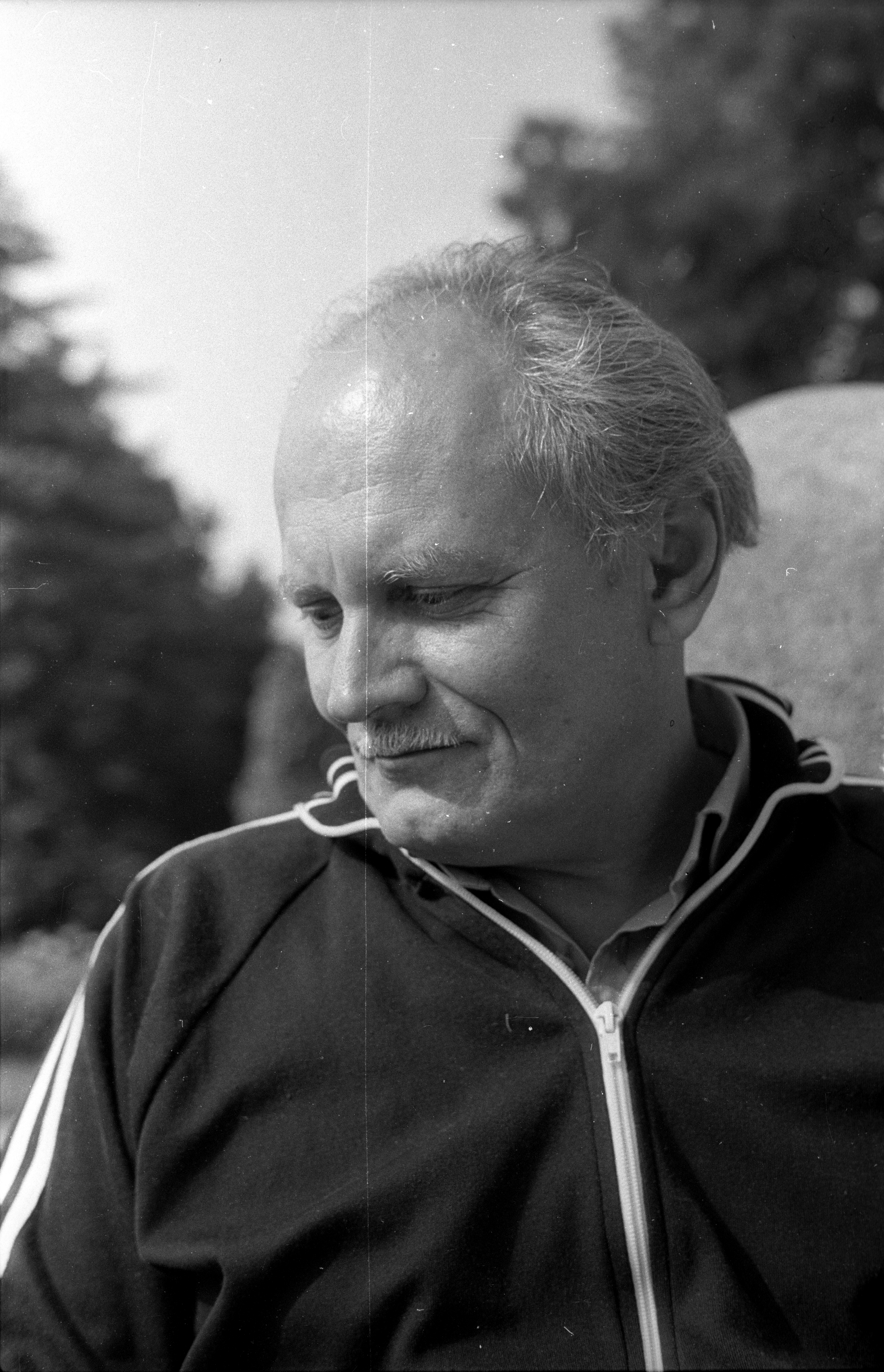 Árpád Göncz was a writer, translator, and politician, and he served as the first democratically elected President of Hungary after the regime change. He played an active role in the 1956 Revolution. He was imprisoned and remained marginalized upon release. Beginning in the late 1970s, he became more and more involved in the democratic opposition movement. He was a founding member of the Historical Justice Committee, which aimed to rehabilitate the legacy and the victims of 1956 and examine its place in Hungarian history. He also cofounded the Network of Free Initiatives (Szabad Kezdeményezések Hálózata) in 1988, an organization out which the liberal political party Alliance of Free Democrats (Szabad Demokraták Szövetsége) grew.

Göncz came from a middle-class Catholic family from Buda. He related to this social milieu in an ambivalent way. On the one hand, he read sociographies by the so-called populist writers (népi írók), and he sympathized with peasant radicalism, while on the other hand, he lived the comfortable life of a young bank clerk at the National Land Mortgage Bank (Országos Földhitelintézet). This was a privileged institution in the late 1930s and early 1940s which managed for instance, the subdivision and lease of confiscated Jewish properties, and Göncz was employed here from the age of nineteen thanks to his family connections. Göncz worked for the Bank as a lawyer beginning in 1942, while he was studying law at the University of Budapest, from which he graduated in 1944. Then he was called up to do military service, but he deserted and joined the antifascist armed resistance. During the Siege of Budapest, he joined the Táncsics Battalion, a partisan force that saved military deserters and Jews from the Budapest ghetto. Göncz took an active and leading role in the battalion, and he sustained a wound to one of his legs.

Göncz was involved in the resistance movement through his networks from the Boy Scout movement and, in particular, from the Pál Teleki Work Group, which was established in 1943. He belonged to the Hárshegy Scoutmasters’ Circle (Hárshegyi Örsvezetők Köre, HÖK), which according to his recollections in the 1980s was too nationalistic for his tastes at the time, but which nevertheless was an important environment which had a lasting influence on him. Here, he came to know Hungarian folklore and the works of writer and essayist László Németh, and he developed patriotic feelings and a deep interest in the peasantry, which he considered the emerging leading class in Hungary. Older members of the scout movement formed the Pál Teleki Work Community, a quasi-political organization which held seminars and lecture series on historiographical and sociological questions that were key issues in Hungarian studies. This group maintained close ties with the Independent Smallholders’ Party, which was forced underground after the German invasion of Hungary and the rise to power of the Arrow Cross Party in 1944. Many members of the group joined the resistance, and Göncz contacted them via the Franciscans, who had a convent in which Göncz hid for some time.

After the war, the Teleki Work Community became an influential centrist platform within the Smallholders' Party, and Göncz held relatively high party functions. He led the youth faction, and he then served as personal secretary to party president Béla Kovács. After Kovács was arrested by the Soviet political police, Göncz became the secretary of the party representatives in the Parliament. As Göncz explained in his oral history interviews later, like Kovács, there were tensions within the party between him and, on the one side, the Fórum Klub, which Göncz described as an embedded communist cell in the Smallholders’ Party, and, on the other, the most outspokenly anti-German Hungarian Brotherhood Community (Magyar Testvéri Közösség), which, according to Göncz, maintained racist views. After Kovács was taken by the Soviets, Göncz was regularly interrogated by the various political polices. Sometimes the violent process lasted for weeks, and he was kept in prison under harsh conditions. The communists tried to turn him into an agent, but they failed.

At the same time, in 1949, the Smallholders’ Party was practically dissolved, and Göncz lost his job. He had difficulty finding a new one. Finally, through a former fellow scout, he got a job as a welder and iron worker, and, in 1950, he was hired by the Soil Improvement Enterprise (Talajjavító Vállalat) in Budapest. In 1952, he also enrolled in the University of Agronomy in Gödöllő, though years later he was not permitted to finish because of his involvement in the 1956 Revolution. In the early 1950s, Göncz focused on his job and family and was not involved in any dissident activity, although the political police kept him under constant surveillance. He was generally not interested in the reform communist movement around Imre Nagy, which he viewed as an internal communist issue in which he took little interest. The only somewhat significant political move on his side was that he hired the sons of people who had been interned in the Recsk Forced Labor Camp. In the summer of 1956, former members of the Smallholders’ Party reached out to Göncz. His first public appearance took place on 17 October 1956, when he criticized the Soviet agrarian model at one of the debates of the Petőfi Circle, a forum which has been generally considered important in the emergence of a revolutionary atmosphere.

In 1956 Göncz was not particularly well-informed. As he had been separated from political issues for years, it took some time for him to assess the power relations and the exact positions of the protagonists. As far as he could recall, this did not happen until 27–28 October, days after the outbreak of the revolution. Göncz played a role in making Béla Kovács, who was in complete retirement at the time, part of the uprising. However, in his assessment, the reestablished Smallholders Party leaned too far to the right, so he joined the Peasant Alliance instead, a former ally of the Smallholders which was also reestablished. After the revolution was crushed by the Soviet army, he played a key role in setting Indian diplomacy in motion to mediate between the Hungarian political elite and the Soviets. In February 1957, he was involved in the preparations to smuggle Imre Nagy’s memorandum “In Defense of the Hungarian People” out of the country. When people began to be arrested, he helped organize aid for the families of those who had been apprehended. Göncz himself was arrested in May, along with political thinker and politician István Bibó, with whom Göncz had worked on a political solution to the conflict, which they sent to the Soviets via the Indian ambassador. They were both sentenced to life in prison.

In 1960, he participated in the prison hunger strike, and the authorities blamed him and Bibó, among others, for organizing the protest. They were both released in 1963 in accordance with a general amnesty (which, however, did not apply to everyone, as the regime kept some people in prison on the grounds that they were common criminals, and not political criminals). In prison, he taught himself English and worked as a translator, and when he was released, this became his official profession. His former fellow prisoners provided him with work. The first novel he translated as a free man was William Golding's The Spire, which was published by Európa in 1965, where literary critic Elemér Hankiss served as an editor. This was followed by a series of classics, from works by Faulkner to works by Updike and Tolkien’s The Lord of the Rings. Göncz wrote his first play, entitled Rácsok (Barriers), in 1968. It is a reflection on his prison experiences, but it is set in Latin America. At the advice of friends, he published it only ten years later. His first work of long fiction was the novel Sarusok (The Sandaled Ones), which was published in 1974. The novel is a historical parable set in the Middle Ages. By telling the story of the heretical movement of the Waldensians, Göncz reflects on the relationship between the individual and political power.

His first trip to a foreign country during the socialist era was to Warsaw. In 1979, Sarusok was published in Polish as Trepkarze by Publishing Institut Pax (Instytut Wydawniczy Pax), and the Hungarian Writer's Union let Göncz visit Poland for two weeks. That year, he was actively involved in the publication of the book in memory of István Bibó, which was not allowed to be published officially, so it was released as a samizdat. Göncz and his former prisoner friend Ferenc Donáth played a mediating role among the members of the very heterogeneous group of authors. Göncz was an ideal figure to play this role, since he did belonged neither to the populist writers nor to the urbanist camp, two antagonistic groups which have been prominent in Hungarian intellectual history.

Göncz’s maintained this in-between position throughout the 1980s. He was an acceptable and appreciated figure for the most diverse figures in the dissident political scene. In 1982, the American-Hungarian Cultural Society invited him to give a lecture tour thanks to his friend, president of the society Tibor Hám, whom he knew from the Teleki Work Group. Two years later, he was one of the recipients of a Soros Fellowship. These five months made a deep impression on Göncz, and he felt liberated.

In October 1988, former fellow Smallholder József Bognár invited Göncz to reestablish the party, and Göncz joined the talks. While Tivadar Pártay (also a former Smallholder) firmly supported reestablishing the party, Göncz belonged to another faction led by Vince Vörös and soon-to-be prime minister József Antall. This faction suggested not provoking the communist party by relaunching a party, and instead it established the Béla Kovács Political Society. Göncz sensed ideological differences between himself and the dominant voices among the Smallholders, so he gravitated towards the democratic opposition, with whom he maintained good relationship.

In June 1989, Göncz played a prominent role in the preparations for the reburial of Imre Nagy and his fellow martyrs of the 1956 revolution, which was initiated by the Committee for Historical Justice. Like the publication of the Bibó book, this was again an event that brought together people with diverse political views. Göncz’s election to serve as president of the Writer's Union in November 1989 indicated his growing reputation. After the first free parliamentary elections, he became the President of the Parliament in May 1990 and then the President of the Hungarian Republic in August 1990. He held this position for ten years.

As he explained in a 1988 interview, Göncz felt that he had lived in internal exile during the decades of the socialist system, and he proudly remembered not having made any compromises to further his career. For him, the communist party was monolithic: “for me, after all, [Imre] Pozsgay and Rákosi were profoundly the same," as Göncz put it.