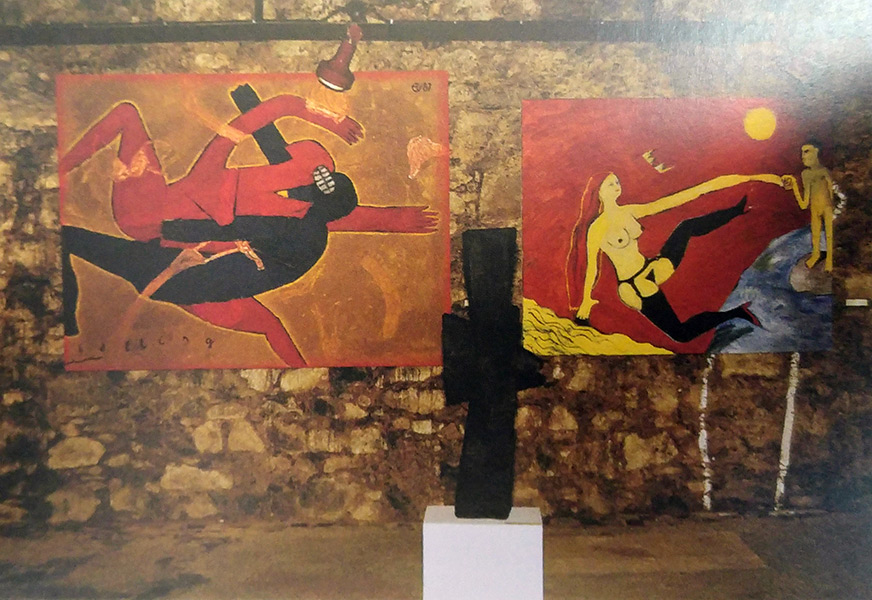 In the autumn of 1987, the official collective yearly exhibition of the artists living in Szentendre ("Szentendrei Tárlat '87") was being organized in the museum on the main square of the city. A professional jury had selected and approved the works to be shown, and the spatial arrangement of the pieces had been completed.

Suddenly, the director of the museum called the curator and said that two particular works could not be shown (the painting by András Wahorn, to which they objected because of its explicit sexual references, and the installation by Imre Bukta because of his use of manure as one of the materials).

This decision created controversy among the exhibiting artists, and eleven of them (members of the Vajda Lajos Studio) decided to withdraw their works from the exhibition to protest the challenge to the jury’s decision and to express their solidarity with the artists who had created the banned works.

At the same time, they decided to arrange a parallel exhibition in their cellar gallery around the corner, which would open at the same time as the official opening. This became the “Open Space Exhibition” (the title in Hungarian refers also to the legendary open air exhibitions held unofficially from the late 1960s on, which created the community which later became the VLS).

The removal of the works by eleven artists created large gaps in the official exhibition arrangement, so the curator decided to put empty black frames in these gaps, together with a large apostrophe. The issue was addressed in the official opening speech, in which it was referred to as the “expressive gesture of young artists.” Later, the black frames and the apostrophe disappeared, and the gaps were filled with stored works from the museum collection.