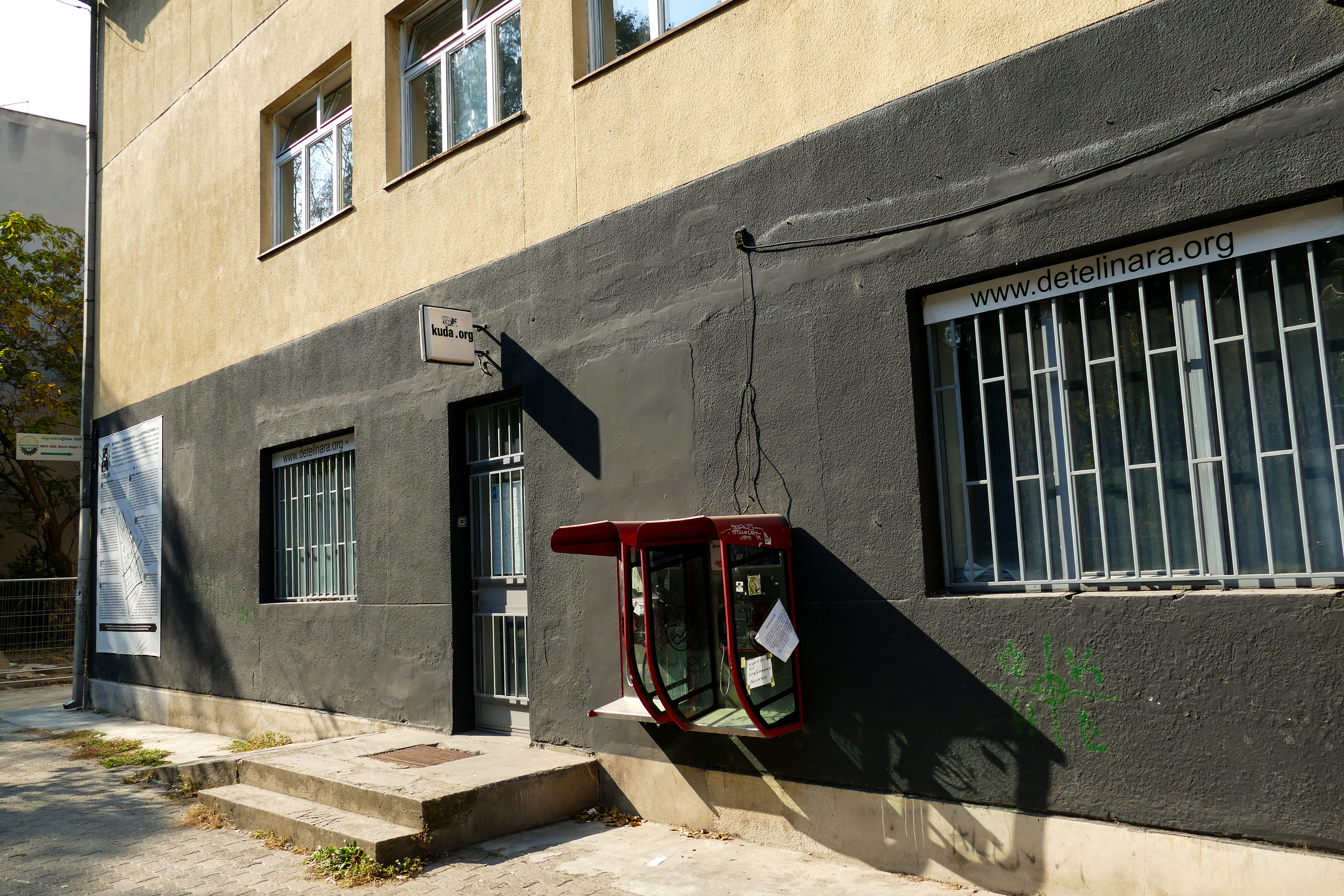 The New Media Center_kuda.org undertakes research projects (kuda in Serbian means where to). Between 2003 and 2007 the organization worked on redefining the concept of youth culture. Its members produced the Summer Camp, where guests were invited to reimagine city events and approaches to recognizing problems of youth culture. In cooperation with other organizations, kuda.org established the Youth Center CK13 with the idea of motivating others to organize similar venues for youth, and they have been successful. kuda.org participated in CK13’s activities until 2012, when a newly formed group took over responsibilities and kuda.org continued to pursue research projects.

A starting point for kuda.org was the notion that visual culture in its institutional form and its presentation in the early 2000s was incapable of catching the interest of young people. Its members started to question which other forms and infrastructure could attract young people and provide them with a platform.

The challenges faced during the initial formation of any collective are perpetual ones, which is why kuda.org questions all types of political organizing. When should people organize? What motivates them? How do they make decisions? What is the trajectory? What are the labor dynamics of the organization? These questions are complex and they should reflect the cultural background of the whole community. While focusing on political organizing and activities of art groups, kuda.org hopes to initiate other approaches in order to extend the analysis of social infrastructure in socialism.

The year 1971 was a crucial moment in the history of Novi Sad, but because of simultaneous events in larger locales, such as the Croatian Spring, it has generally been neglected. A new generation of politicians was emerging at the time, but they nevertheless lacked an understanding of contemporary events in the arts. In Pantelić’s view Novi Sad acted in the manner of a deeply conservative environment and has remained as such ever since. The activities of kuda.org highlight this atmosphere, with which it is not willing to reconcile. That is why it undertakes research and networking. So far, around fifteen, mostly international PhD students have worked with kuda.org, researching Central European avantgarde productions.

Kuda.org brings together artists as well as people from other backgrounds, it tried to exert influence on local cultural politics and to change living and working conditions with the aim of creating better circumstances for artistic production. Furthermore, the members of the organization often question their own positions in relation to past and future events. Networking and cooperation are also among their priorities which they realize by organizing workshops and lectures. Since 2001, kuda.org has hosted lecturers in a variety of fields: engineering, IT, the arts, sociology, philosophy and other social sciences, analyzing the role of new technologies in contemporary society.

In conversation with COURAGE Pantelić stated “We have concluded that in order to explain who we are and what our position is, research has to be conducted both backward and forward. Backward, in order to analyze the neo-avantgarde constellation of things, which is reflected in art and politics, and forward in order to know the trajectory which leads to a better understanding of social phenomena.” This is the reason why The Continuous Art Class can be considered a megastructure. It is not determined by a specific framework, the poetics of each of the participants can be individually developed and will be developed in relation to the financial conditions and number of researchers. The next planned project is to publish a book on the group KÔD with Slavko Bogdanović and Miroslav Mandić, who are in possession of a rich collection of artefacts.

Another planned area of research is music, an immaterial form of work and communication. After leaving the public cultural institutions, Predrag Vranešević with his project Laboratory of Sound (Laboratorija Zvuka) and Slobodan Tišma, with La Strada, turned to music. The idea is to collect the recordings of the groups that gathered in private spaces, away from institutionalized culture, and to publish them. This area of work is conducted through the program under the working title “Lost and Found”.

Displaying trajectories makes up the core of the collection developed by kuda.org. In terms of methodology, they treat content based on historical research as grounds for new projects. They collaborate with art historians, but do not collect artwork. Publishing is an important activity for the organization and they distribute their publications through public presentations, exhibitions and other activities.

Analyzing the cultural politics of the city and of its public space, they have come to questioning the development of local politics, where they try to motivate members of the local community to organize in order to solve problems and improve the quality of life. In order to contribute to public dialogue, kuda.org established Tenant (Stanar) magazine, in which individuals write about social problems centered around housing and neighborhood.

The organization currently employs four people, though the number varies as a result of project-based financing. The core of the organization includes the web developer, program directors and administration. The organizations work is fully transparent to every member and thus everyone is able to contribute.

Other fields of activity include supporting the work of other artists or initiatives, collaboration with local political movements and support for local activism, organization of seminars, research projects (translation, symposiums, exhibitions).