Friedrich Teutsch Center for Dialogue and Culture of the Evangelical Church A.C. in Romania 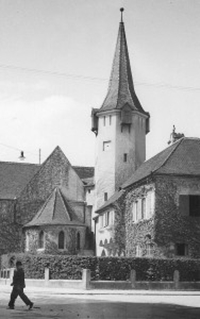 The Friedrich Teutsch Centre for Dialogue and Culture of the Evangelical Church A.C. in Romania (Teutsch House) has asserted itself as one of the most active cultural institutions of the German minority in Romania. The High Consistory of the Evangelical Church A.C. in Romania established this centre in order to become a main repository for the Transylvanian Saxon archives in Romania, especially for the local Evangelical Church archives and for those personal archives in danger of being destroyed. The building of Teutsch House was constructed in 1883 by the Evangelical Church and was used before 1948 as a church orphanage. In 1948, the communist authorities nationalised the building. After the collapse of communism, when the High Consistory decided to collect the parish archives from all over the country and store them in Sibiu, the Evangelical Church initiated legal procedures to regain the ownership rights for Teutsch House. After regaining this building in 2000, the High Consistory decided that the future Teutsch House was the place where the Evangelical Church archives should be centralised and made open to the public. The repository in Teutsch House was then devised in such a way as to protect and preserve all these archives. Currently, Teutsch House includes an archive, a museum, and a library. Opened to the public in 2003, the archive now comprises the High Consistory collection, the parish churches collection, the photograph collection, and private individuals’ collections. Since 2003, many personal archives of Transylvanian Saxons have been donated to Teutsch House, which has thus become the main repository for Saxon archives in Romania. Among these personal archives, it is worth mentioning the Friedrich Philippi Collection and the Eginald Schlattner Collection. Researchers not only from Romania but also from other countries have already visited the archival resources of Teutsch House.
Teutsch House has developed collaborations with similar institutions (church archives) in the German speaking world. The Centre organises exhibitions in partnership with other institutions, such as museums or archives. One such collaboration resulted in the art exhibition of Renée Renard, “Ein Weg wie hundert Leben,” which illustrated the deportation of the adult members of the German community of Banat Swabians to the Soviet Union in 1945. The Centre also hosts its partner, Institut für Ökumenische Forschung Hermannstadt (The Institute for Ecumenic Studies of Sibiu), which organises cultural events and publishes theological literature. Between October 2016  and March 2017, Teutsch House hosted the exhibition entitled “Reformation im östlichen Europa – Siebenbürgen,” which illustrates the contribution of Transylvanian religious reformers to the larger European Protestant movement.