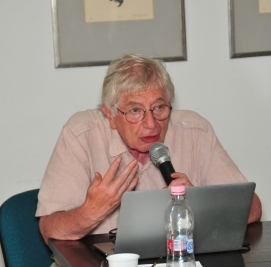 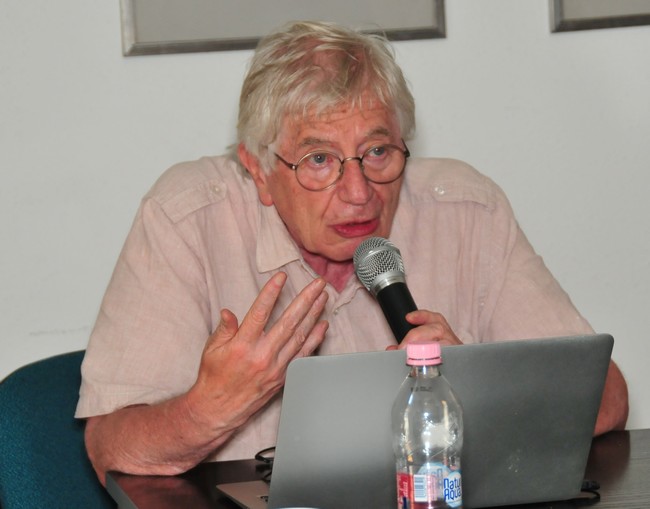 Ferenc Erős (1946-) is a social psychologist who has done pioneering work in psychoanalysis, analytical psychology, and the question of Jewish identity after the Holocaust.

He graduated from Eötvös Loránd University in psychology in 1969. He has been working in the Psychological Institute of the Hungarian Academy of Sciences (HAS) since 1973. In 2002, he became a doctor of the HAS. In addition to his work as a researcher, he has also been an active contributor to educational work since the 1970s. The journals Thalassa and Imágó Budapest are edited by him, and he plays an important role in scholarly life in the public sphere. The primary focus of his research is the social-psychological examination of identities, social discrimination, structures of power, authoritarian systems, and the history and theory of psychoanalysis.

In an interview in 2005, he mentioned that some of his former teachers had had a significant impact on his career. His literature teacher gave him books about psychology, for example, the works of Sigmund Freud, and he also read István Bibó’s book on Jewish issue. Furthermore, his Jewish origins and his family involvement motivated him early on to learn as much as he could about the Holocaust. When he was 17 years old, he tried to do research on the deportation of his family and the local Jewish community of his birthplace, but he did not get any support, so as a very young man he saw how difficult it would be to pursue the study of the topic he had chosen.

His course of study was formed by his teacher, Ferenc Pataki, who taught social psychology, and László Garai, who dealt with Marxist philosophy at the university. In social psychology, he was interested not so much in empirical research, but rather in theoretical approaches and social criticism. These fields were not the most popular. He noted this himself: “I was a little bit on the periphery, however, I never felt that anybody would have supplanted me. Rather, I would express that I was marginalized by myself.”

A six-month scholarship at Columbia University in 1976 was an important event in his professional development. He met a group of second-generation Holocaust survivors, and this experience had a strong impact on him. He was motivated both by his personal impressions and by works about the aftermath of the trauma of the Holocaust, mainly Helen Epstein’s book Children of the Holocaust. The psychotherapeutic and psychoanalytical issues concerning this phenomenon were an essential reference point for him.

Together with psychologist András Stark, Erős began doing interviews with second-generation Holocaust survivors and researching the question of Jewish identity after World War II in the late 1970s. The history and remembrance of the Holocaust were suppressed taboos under the Kádár regime. One could talk about the Shoah with family memebrs, but it was not an acceptable topic in public discourse or scientific research. For Erős and Stark, the questions which arose in the course of this work also touched on their personal lives. As children of Holocaust survivors, they were curious to know how widespread their experiences were.

Although Ferec Erős was not a member of an oppositional group, the focus of his research (repressed Jewish identity and social critical social psychology) led him to the oppositional cultural community of late socialism. Initially, his findings were known only to the professional audience, but then they began to become familiar the so-called second public sphere through lectures which were held at the so-called “flying university” and articles in samizdat publications. Erős and András Kovács (who was one of the main organizers of this second public sphere) published a paper together with Katalin Lévai in the journal Medvetánc, which was the most important critical, intellectual forum of the 1980s. (Erős, Ferenc, András Kovács, and Katalin Lévai. “Hogyan tudtam meg, hogy zsidó vagyok?” Medvetánc, no. 2-3 (1985), 129-144.). This paper was considered a decisive empirical analysis. Furthermore, together with Bea Ehmann, Erős devised a narrative model of Jewish identity (Erős, Ferenc, and Bea Ehmann. “Jewish Identity in Hungary, A narrative model suggested.” In Ambiguous Identities in the New Europe, 121-134. Budapest: Replika, 1997).

In one of his lectures, Erős made the contention that to ask someone how she or he learned of her or his Jewish origins is to touch on the anxieties and discomforts of a whole generation. Doing an interview about this subject meant breaking the silence, and it also constituted a significant act of memory policy. It acknowledged the existence of a subcultural identity which was fed by a sense of belonging to a discriminated group. When Erős began to deal with the concept of identity, this was an awkward and sensitive topic, because “everybody had a type of identity which often caused shame”. This stigmatization and discrimination also exist today, according to Erős: “If someone freely accepts his or her identity, he or she can suffer discrimination.”

Ferenc Erős is very active. He published a book titled “Psyche and Power” in 2016 (Erős, Ferenc. Psziché és hatalom. Tanulmányok, esszék. Budapest: Pesti Kalligram, 2016.). Moreover, he reflects sensitively on current social phenomena. For example, he held a lecture with met with considerable attention on the social and psychological dimensions of the so-called migration crisis on the occasion of a meeting of the Hungarian Psychological Association in November 2015.