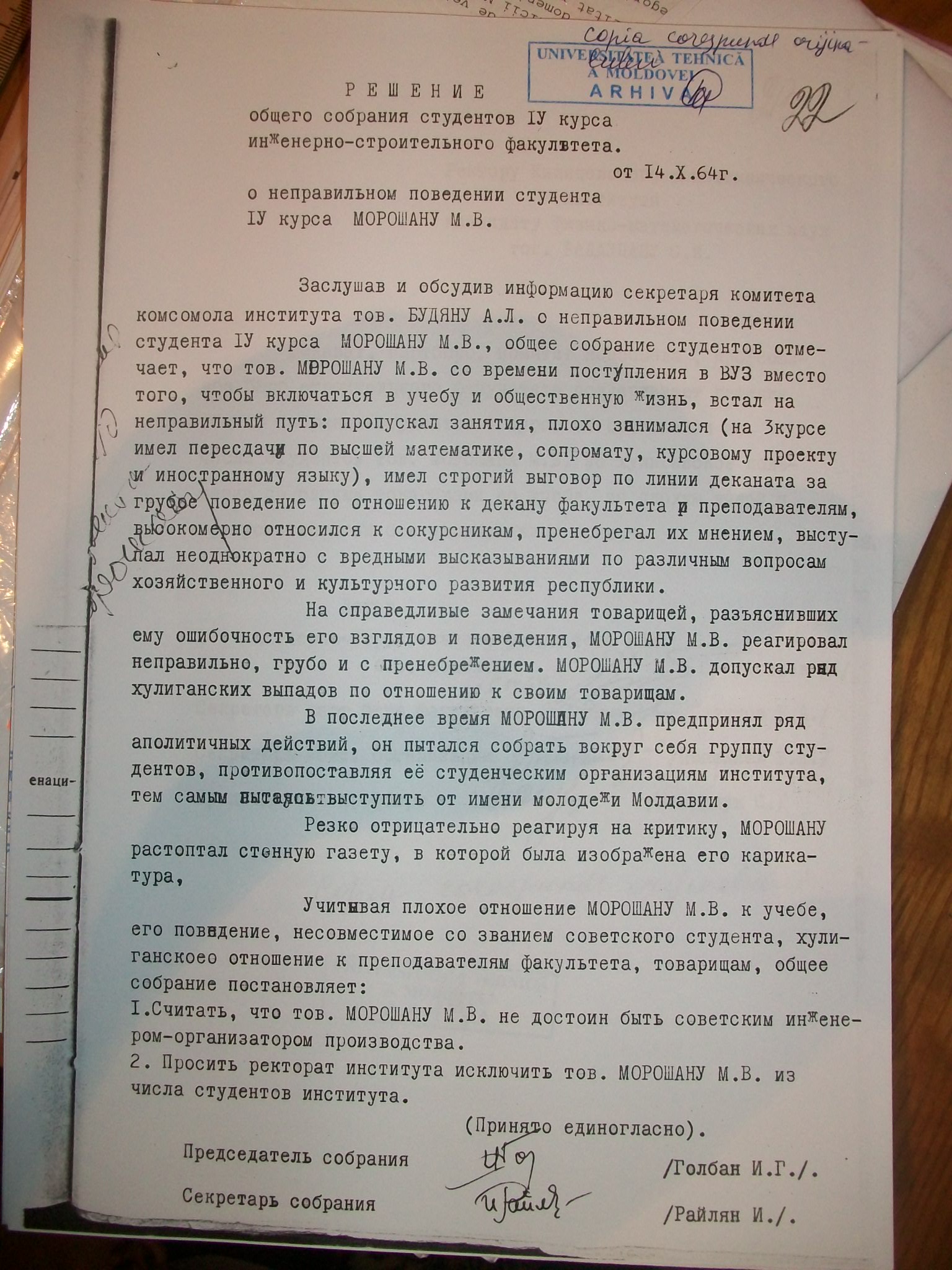 Following his organisation of the wreath-laying ceremony at the statue of Stephen the Great on 11 October 1964, Moroșanu was severely reprimanded and subsequently expelled from the Polytechnic Institute several days later. The expulsion process followed a carefully staged ritual which involved, among other things, a decision of the “student collective” presumably taken from below. This stage was necessary as a formal preliminary step to the official decision signed by the rector. It also served as a confirmation of the loyalty and political reliability of the student body, which acted in solidarity in order to eliminate any “foreign elements” from its midst. A similar strategy was followed in other cases related to accusations of nationalism against Moldavian intellectuals in this period. The decision of the students’ “general meeting” was issued on 14 October 1964. This document is revealing not only due to its contents, but also because of the euphemistic language it used to argue for Moroșanu’s expulsion. After a preliminary report of the secretary of the Institute’s Komsomol cell, the meeting took note of Moroșanu’s “unacceptable behaviour.” This consisted, among other things, in his unmotivated absences, lack of academic discipline and poor performance, displaying of a rude attitude toward the head of department and his colleagues and, most importantly, in his “pernicious assertions concerning different questions related to the economic and cultural development of the republic.” Moroșanu allegedly dismissed, “rudely, incorrectly and with open contempt,” the attempts of his colleagues to point out his mistaken views and behaviour. The euphemism of the document reached its height when Moroșanu was accused of “performing a series of a-political actions” [a veiled reference to the incident at Stephen the Great’s statue] and of “attempting to assemble around himself a group of students, setting this group against the student organisations of the Institute and thus trying to position himself as a spokesman on behalf of Moldavia’s youth.” Moroșanu was also accused of an unhealthy reaction to criticism, “trampling upon” the student newspaper which printed his caricature. Despite his temperamental issues, it is obvious that his political behaviour was the real issue which led to his expulsion. Although the meeting concluded by recommending Moroșanu’s expulsion on the ostensible grounds of his “behaviour, which was incompatible with the rank of a Soviet student” and his “hooligan-like attitude toward the department’s staffand fellow students,” the invocation of his “a-political deeds” shows the limit of tolerance beyond which the Soviet authorities were unwilling to go. The meeting formally requested Moroșanu’s expulsion from the institute, deeming him “unfit to become a Soviet engineer and organiser of production.” Two days later, on 16 October 1964, the rector of the Polytechnic Institute, S. I. Rădăuțanu, signed an order expelling Moroșanu. Significantly, this document reproduced the decision of the student meetingalmost word-for-word, thus underscoring the staged character of the whole affair. However, in the late 1960s, after serving his prison term, Moroșanu succeeded in being readmitted to the Polytechnic Institute after an audience with the Union minister of higher education. This was due to his persistence and to his skilful manipulation of Soviet legislation.