Special edition 'Glossary of Technology' in 1981 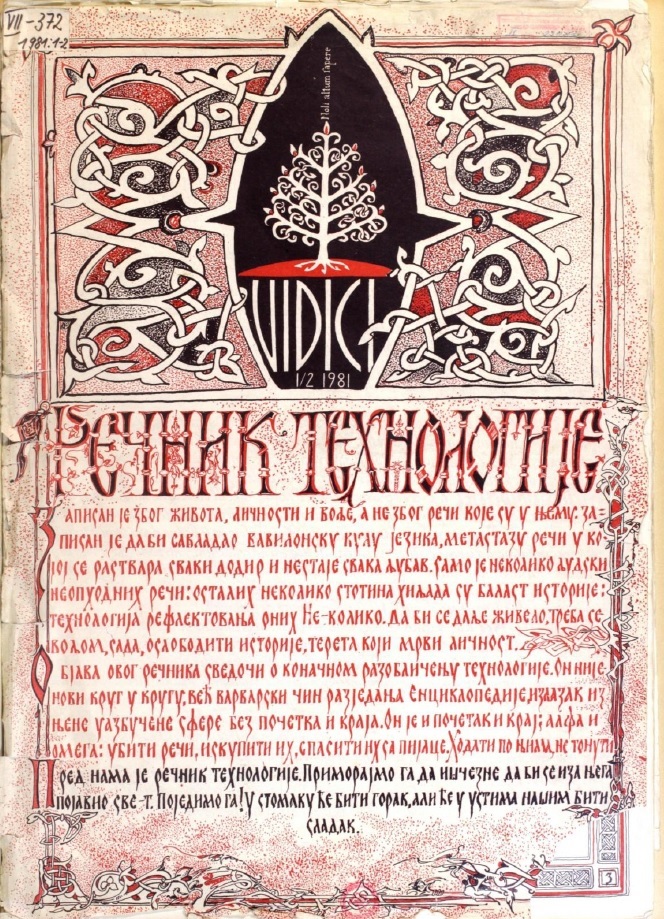 “The Glossary of Technology” is the name for the special issue of “Vidici” that came out in the spring of 1981. It is one of the most significant dissenting publications that directly relied on the then subversive press trends in Czechoslovakia and Poland. “The Glossary of Technology” acquired a great deal of inspiration from the Solidarity Movement, which some of the journalists and editors were in contact with. In contrast to all previous editions, it was modelled on a manuscript from mediaval times with illustrations and using a calligraphic style. It was completely handmade and crafted with old-fashioned technology. Another specificity was that this issue was conceived as a dictionary with carefully selected samples. The manner in which the dictionary looked had a symbolic meaning. It was a protest against the modern technology-based social systems (Z.P. Piroćanac, Nomenclatura Serbica, 2012, 1).

The edition had 171 terms on 30 pages. Some of the terms mentioned were: "WILL – unconditionality. The possessor of movement and the only force that can master it. Will realized as life is personality. Will is without conditions, but it is the condition for everything. “Let there be light,” and there was light. (Book of Genesis); DEMOCRACY – equilibrium. A form of medium of society. This is the technology that cannot be eliminated by an individual. The devilish game of democracy is concerned with knowledge and ignorance, crime and punishment, cruelty and kindness ... (Cummings); MASS – indolence. Being the mass does not mean being part of the crowd, but rather being indistinguishable in the same impersonal frequency of consciousness in general. History is required to vanish in the mass, because it has become complete numbness, pure immanence. A direct consequence of the new role of masses organised into a collective ... is barbarism (Berdyaev); MORALS – mirroring, limiting. Morals are laws realized in the medium of society. Only technologists need morality to avoid collision while moving, however the individual does not need it. Morality is acting egoism. Moral judgments belong to a stage of ignorance in which the distinction between what is real and imaginary is lacking …” (Nietzsche).

All this was too confusing for the political authorities who did not know exactly what was behind this coded edition. The edition was banned, and its subversive nature was discussed in front of the University Commitee of the Union of Communists, where an analysis was initially formulated in the party document "Analysis of the Ideological Orientation of the Journals "Vidici" and "Student".” In it we see that it is precisely the "aesopian language" and that it is impossible to understand the text without a "key" or "code", which worried the party most. Eventually, it was concluded that "The Glossary" was anti-humanist and antisocialist-oriented, which was enough of a reason to ban it.
Soon afterwards, the party organs launched a media avalanche that lasted for several months, and the highest party officials spoke of the necessity to reckon with the group gathered around "Vidici" and "Student". However, it turned out that the criticism of "The Glossary" was merely a motive for launching a broader backlash against dissident groups after Tito’s death (1980). The subsequent outcome would be the publication of the "White Book" in 1984, by Croatia’s Communist party leaders, which called for an end to the so-called "cultural counter-revolution".