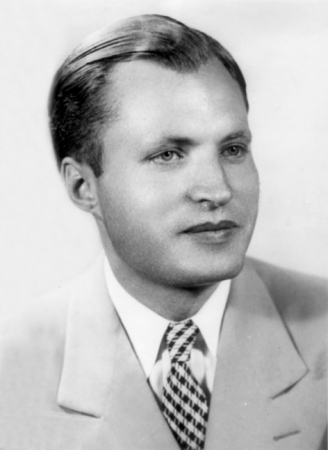 Péter Keszi Kovács was born in Örvényszög-Polgár, in 1912. He studied in Balmazújváros and Debrecen. After his final exams he joined the army, but was seriously injured and had to leave. He continued his studies at the Budapest University of Technology and Economics in Geography and Ethnography. He worked with Pál Teleki (prime minister of the Kingdom of Hungary from 19 July 1920–14 April 1921 and 16 February 1939–3 April 1941), and actively took part in the life of the Institute of Researching Ethnics and Regions [Táj-és Népkutató Központ]. In 1938 he organised an exhibition which emphasized the problems of peasant life in Hungary. His career was interrupted by World War II, during which he was a prisioner of war in the Soviet Union. Upon his return to Hungary he wrote his dissertation about the economic life of Northern Tiszántúl. When the Institute of Researching Ethnics and Regions was abolished, he began work at the Museum of Ethnography with his previous colleagues: Péter Morvay and Ágnes Kovács. His duties at the museum included organising the social collecting system of the museum, and he later elaborated the concept of the Ethnological Archives. He continued working there until his retirement in 1973.
His brother, László Keszi Kovács, also became an ethnographer.