Publication: Petrescu, Dan and Liviu Cangeopol. What remains to be said: Free conversations in an occupied country, in Romanian, 1990 (rev. ed. 2000). Book 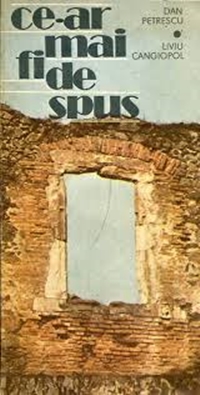 The volume written by Dan Petrescu together with Liviu Cangeopol is, beyond doubt, one of the key books of Romanian dissidence. Its subject matter is extremely wide-ranging but, either explicitly or implicitly comes under the general theme of the values of liberal democracy and the “open society.” The book was begun in the spring of 1988 and finished the same year, in the autumn. Shortly after it was finished, its content was recorded on five audio cassettes. Later, the tapes were removed from their plastic housings and transported, after a tense journey, to the West by the Italian language assistant Anna Alassio, who had been attached to the University of Iaşi. “An audio-book avant la lettre. From the time of communism. The book, in its read form, was the length of five cassettes. But it wasn’t enough just to do that. We then took the cassettes apart and removed the tapes, so that, for transport, they would occupy as little volume as possible and not resemble anything we had sent out before. The rolls of tape occupied a very small space, and could be easily hidden and then remounted very easily. Which is what happened later, thanks to Dan Alexe. But not before further adventures. The Italian woman went with the cassettes to some members of the Romanian exile community and at first they told her that nothing could be done. She got angry, and reproached them that the language assistants were taking risks and when they reached their destination nothing could be done with what they brought. Finally they discovered Dan Alexe and he managed to mount the tapes.” Parts of the book were broadcast on Voice of America, but the whole book could unfortunately only be published after the fall of communism, in the February 1990 edition of the periodical Agora, the first and only alternative cultural journal in Romanian published in the United States. After the fall of communism, the book was also published in Romania, in two editions, 1990 and 2000. The second edition appeared in the “Societatea politică” (Political society) series at the Nemira publishing house, and in addition to the initial text, it also included all the other dissident texts of Dan Petrescu and Liviu Cangeopol, the minute of the 1983 search, the notices of fines issued for Dan Petrescu’s interviews on 10 October 1989 on Radio Free Europe and Voice of America, and the lists of signatures in support of Dan Petrescu collected by Ioan Petru Culianu in November 1989, when the former was on hunger strike. Like the first edition of 1990, the volume includes a preface by Vladimir Tismăneanu, an explanatory note on the context that gave rise to the book, a letter from Dan Alexe telling of the process by which the book went from audio tape to text transcribed for publication, and a letter of support from the poet Mariana Marin. In addition, the second edition has a postface by Cristina Petrescu.