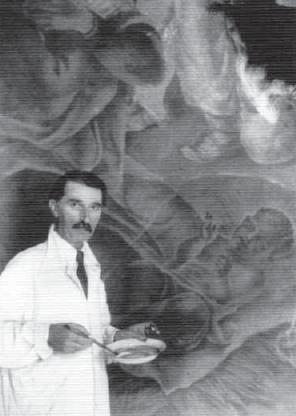 Painter and writer Jozo Kljaković was born in Solin near Split on March 10, 1889. He finished secondary school in Split in 1908, after which he studied mathematics and physics in Zagreb. He then went to Prague and Vienna, where he studied architecture at a polytechnic college. He soon devoted himself to painting under the influence of Vlaho Bukovac, and acquired his artistic skill first in Geneva under Ferdinand Hodler, and then in Vienna at various art museums. In 1911, he went to Rome to attend the Institute of Fine Arts, and later began to study Florentine art in early 1912. In the Académie Ranson in Paris in the 1920s, he finally concluded his education with Maurice Denis and Marcel Lenoira, refining his skill in fresco-painting.

Politically, in the First World War, he advocated the creation of the Yugoslav state and fled to Serbia in 1912, avoiding mandatory military service in the Austro-Hungarian Monarchy. After briefly living in Serbia until 1915 as an art instructor, he went to Paris and Geneva, where he remained until the end of the First World War, and then moved to Zagreb for an extended period. In Zagreb, he was granted a post as a professor of wall and decorative painting at the Zagreb Academy of Fine Arts, where he worked from 1921 until his emigration in 1943. Together with Ivan Meštrović, Kljaković was the central figure of the Zagreb Circle’s art school in the interwar period. As a distinguished public intellectual, in 1934 he signed the Zagreb Memorandum in which he sought the federalization of the Kingdom of Yugoslavia after assassination of King Alexander I Karađorđević.

After the proclamation of the Independent State of Croatia, Kljaković was arrested and interned between October 1941 and February 1942 due to his political past and Yugoslav orientation. He went to Rome in 1943, where he lived until 1947, when he went to Buenos Aires. He returned to Rome in 1956. At that time, he was vice-president of the St. Jerome Fraternity for Assistance to Croatian Refugees in the post-war era. His second stay in Rome lasted from 1956 to 1968, when he finally returned to Zagreb. Kljaković did not dare to return to the country immediately after the war because of his criticisms of Tito's regime and socialist Yugoslavia, but also due to his pro-democratic positions and highly developed religious art.

However, just before his death, when he was old and blind, he decided to return to his own country and die there. There was a process of so-called “liberalization” in the 1960s, and Kljaković no longer had to fear for his life as much as in the initial post-war years. Croatian sculptor Antun Augustinčić, who studied under Kljaković at the Academy of Arts, deserved the most credit for his return. In his letter to Augustinčić dated May 13, 1967, Kljaković explicitly stated that his decision to return to Croatia was crucially influenced by two external events: the Brijuni Plenum and the resignation of Aleksandar Ranković in 1966, one of Tito's main associates, and the Protocol in that same year which established formal relations between the Vatican and Tito's Yugoslavia ad led to the re-establishment of diplomatic relations between the two states.

Because of these political reversals, Kljaković hoped that the "evolution of our communists" had progressed, and he wanted to finally return to his homeland (Kljaković 2018: 111). His return to the country was strictly censored by the regime and Kljaković's funeral was organized under its strict control without a church ceremony. He died in Zagreb on October 1, 1969, at age of 80.