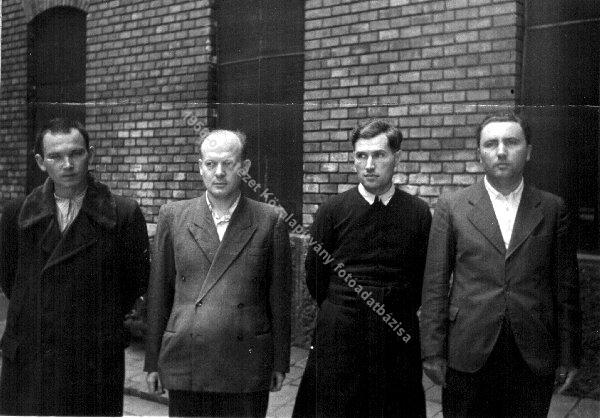 Ödön Lénárd (1911–2003) was a Piarist monk and church historian. He was born in 1911 in Budapest. He joined the Piarist Order in 1926, and he made a simple solemn (1929) and a ceremonial solemn (1933). He studied theology at the university in Budapest (1931–1936), and he obtained a degree as a teacher of history and Latin. After hacing completed his studies, he was ordained as a priest by József Grősz, Archbishop of Kalocsa, on 14 June 1936. He taught at the Piarist Grammar School in Kecskemét, and in 1938, he became a teacher at the Piarist Grammar School in Szeged, where he became vice-director in 1939.

He was nominated to serve as secretary of the national culture department of Actio Catholica. As part of his new role, he was a leader in the movement which fought the nationalization of church-run schools, so he was arrested on 17 June 1948, and in the so-called Actio Catholica Trial, on 23 July 1948 he was sentenced to serve 6 years in prison for incitement. He was released on 1 August 1953 due to the amnesty issued by Prime Minister Imre Nagy. In the following years, he worked as a runner in a shoemaker cooperative and as a water metre-reader, and he continued his work as a spiritual leader in communities of students, families, and the religious sisters of Ágnes Tímár. On 6 February 1961, as part of the next general attack against the Catholic Church, he was arrested along with other priests, and he was found guilty of “leading a conspiracy to demolish the system of the people’s democracy,” and on 19 June 1961, he was sentenced to serve 7 and a half years prison. He was freed sooner due to the general amnesty in 1963. Because of his work as a pastor, he was arrested again on 19 April 1966 and was sentenced to serve 8 years prison for “planning a conspiracy and espionage.” The court united former sentences, and in the end, he was sentenced to 19 years imprisonment. Lénárd spent almost 19 years in jail: he was the last priest in Hungary to be released on 30 June 1977 thanks to the personal intervention of Pope Paul VI after János Kádár’s visit to the Vatican. The State Office of Ecclesiastical Affairs tried to push the Piarist order to make Lénárd leave the country, but he refused. He continued his clerical work precisely where he had stopped at the time of his arrest: he was a pastor and a spiritual leader of adult groups and the community of Cistercian nuns (secretly founded in 1955) until his death (2003).