The indictment against four girls for printing and distributing anti-Bolshevik leaflets, 1945. Manuscript 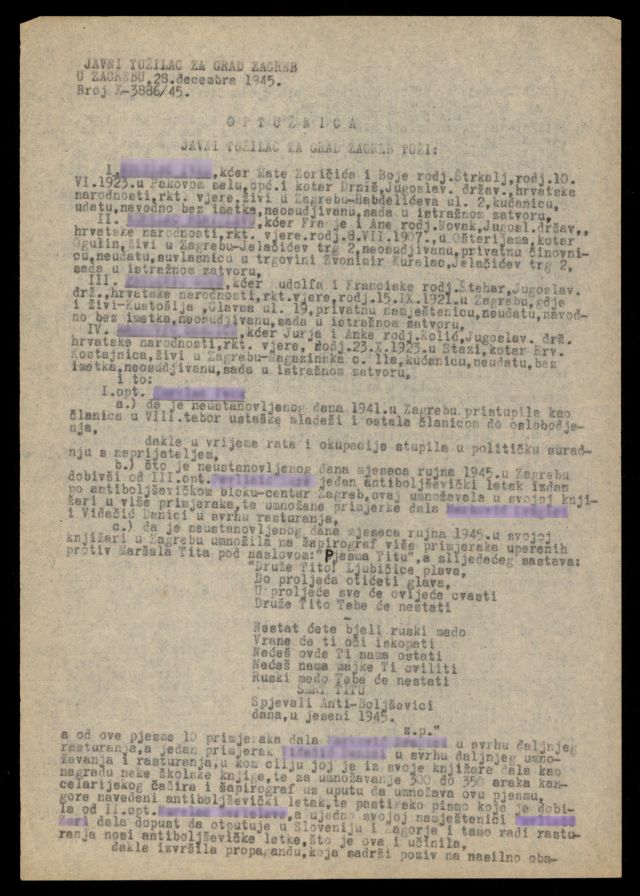 Four girls (I. K., B. K., Z. P. and D. M.) were accused of printing and distributing leaflets with a poem, which inappropriately (ironically) spoke about Josip Broz Tito and for distributing the so-called Pastoral letter of 20  September 1945 written by bishops of Yugoslavia in September 1945. Bishops strongly disapproved of the actions against the Church and priests (including killing) implemented by the new government. A short poem was entitled “ A Poem for Tito” and was parodying a famous partisan song “Comrade Tito, white violet/, the entire youth follows you” and was beginning “Comrade Tito, blue violet/, your head will be off until spring” asking for Tito’s death. It was signed by “anti-bolsheviks”, and Tito was named as a “Russian bear” alluding to his Soviet connections with Stalin. At this time, Tito’s life and work had still not been protected from contestations, but this example of everyday opposition proved the anti-revolutionary and anti-communist activities, which were related to the inheritance of traditions of the collaborationist Independent State of Croatia, and as such was strictly punishable.

The document was created by the public prosecutor in Zagreb on 28th December 1945  (No K-3886/45). Iljko Karaman took the document illegally from the Public Prosecutor's office and stored it in his home collection. The material is available for researching and for copying.