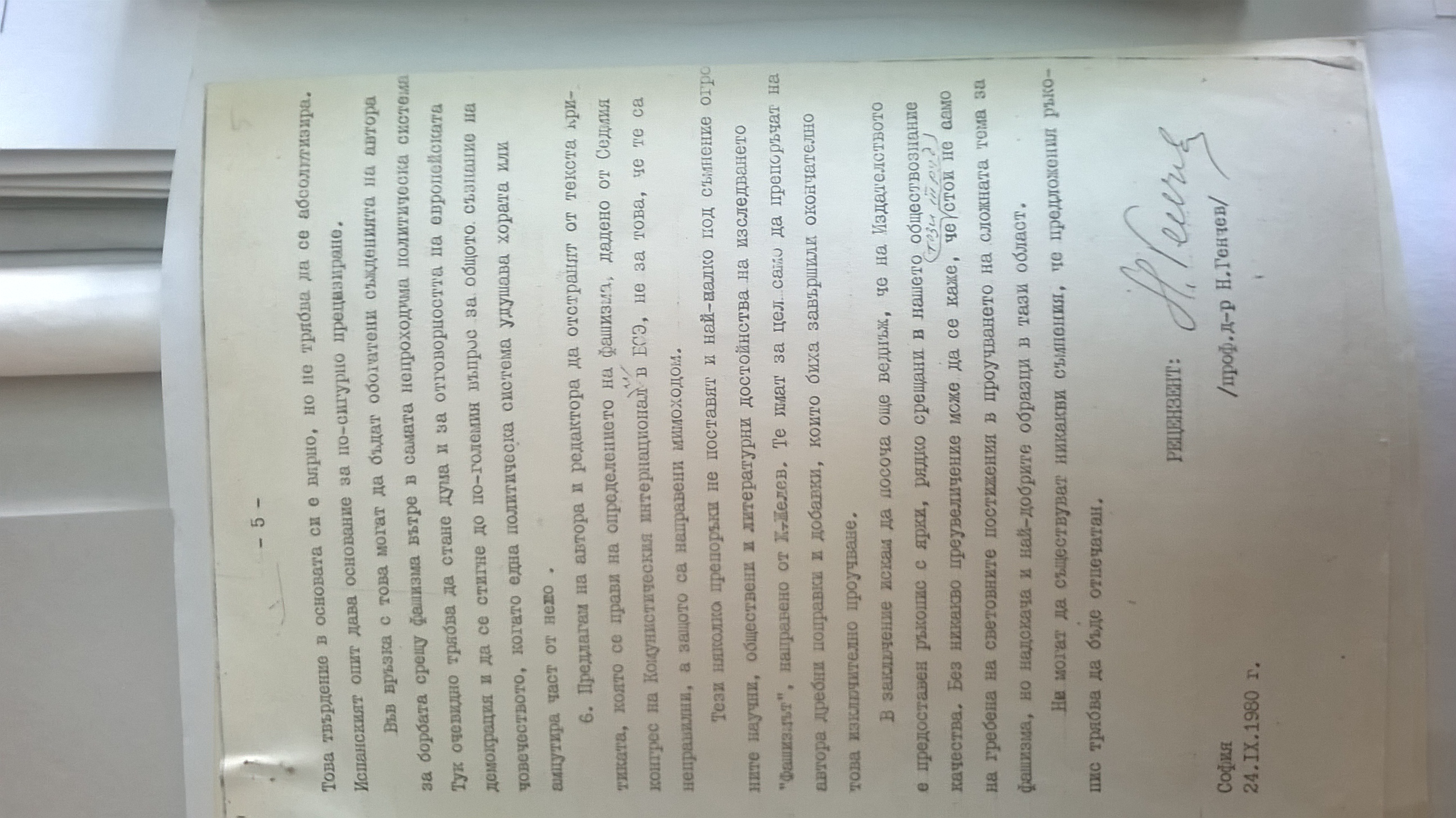 This featured item consists of an archival unit with describes the state party's ban of Zhelev's book Fascism and actions taken to prevent its distribution.
It contains, among others things, book reviews by Prof. Nikolay Genchev and Prof. Mitryu Yankov and minutes of discussions about the book, from the period September 24, 1980, to March 25, 1983, totaling 186 pages.

The book Fascism, originally entitled The Totalitarian State, was written by Zhelyu Zhelev during his period of internal exile in the village of Grozden, Burgas district (1966–72). In his work, Zhelev analyzed the totalitarian regimes of Nazi Germany, Fascist Italy, and Franco Spain, and described the basic principles of fascist regime. Even without directly criticizing communist governments, he presented obvious analogies between fascist and socialist states. This book represents not only Zhelev’s critical philosophy and sociology but also the difficulties of publishing non-conformist texts and the significance of samizdat work.

After finishing the manuscript in 1967, Zhelev attempted to publish it in a number of state publishing houses, but was rejected on the grounds of “lack of paper” or “overfilled publishing plans”. However, the manuscript was quickly distributed as samizdat. In 1968, Zhelev started talks with the Freedom publishing house of the Czechoslovak Communist Party, but the suppression of the Prague Spring prevented the publication of the book in Czech.

In 1979 he submitted the manuscript to the People's Youth [Narodna mladezh] publishing house, the publisher of the Bulgarian Komsomol. He received two positive reviews by leading professors, the philosopher Kiril Vassilev and the historian Nikolay Genchev. In his review in September 1980, Genchev highlighted the qualities of the manuscript: "The author has shown the historical way of gaining power used by the fascist parties in Germany, Italy and Spain, the processes of subordination of the state to the fascist party, the transformation of the fascist party into a ‘state within a state’, the imposition of fascist ideology as a dominant one, not bearing any political or spiritual opposition. (…) The great social consequences of the empowerment of fascism have been shown: the unification of the spiritual life, the depersonalization of the individual, the imposition of an authoritarian way of thinking, the comical cult[A1] [A2]  of the Führer, the transformation of the people into a crowd under the pressure of an unprecedented repressive apparatus and the overall moral degradation as a result of the historic experiment called fascism." He ends with the firm recommendation: "There can be no doubt that the proposed manuscript should be printed."

In March 1982 10,000 copies of the book were published in Bulgaria by Narodna Mladezh as part of the series “Library of Mavros. Popular Marxist Library”. The book caused a sensation. For three weeks, it could be found in bookstores before State Security prohibited its production and sale and confiscated copies because of its “lack of a partisan class approach”. Four thousand copies were destroyed.

The authorities responded with comprehensive and massive repression against all those involved in the issue. Three editors were dismissed: the editor of the book, poet Kiril Gonchev; the editor of the series, Violeta Paneva; the editor of political literature at the publishing house, Stefan Landzhev. The editor-in-chief of Narodna mladezh, Prof. Ivan Slavov, received a written reprimand as a disciplinary measure by the Bulgarian Communist Party (BCP). The reason was the “underestimation of the ideological and political shortcomings of the book Fascism.” Because of his extremely positive review, Genchev was forced to resign from his position as dean of the Faculty of History and his historical program on state Television were suspended for a period of almost four years. Asen Kartalov, who had written a positive review in the Plovdiv-based journal Fatherland Voice [Otechestven glas], received a "strong last warning before expulsion from the Party”. Zhelev himself, who had already been expelled from the Communist Party in 1965 and who at that time was a senior researcher of the Scientific Council at the Institute of Culture and head of the Culture and Personality Department, became victim of a sudden reorganization of the Institute. He was excluded from the Scientific Council and the Culture and Personality Department was closed.

The regime also ordered a critical review by the prominent scholar Mitryu Yankov, Head of the Contemporary Philosophical and Sociological Theories Department at the Bulgarian Academy of Sciences. The manuscript of the review, dated July 19, 1982 and 31 pages long, is preserved in the collection. Yankov’s criticism is scathing. He accuses the author of "too subjectivist a scheme and a subjectivist approach", of "deliberately ignoring the class approach, the author of this book tries to discredit the state and the political system of socialism through numerous analogies with fascism", "copying and compilation", and so on.

The review was written for the Philosophical Thought [Filosofska misal] academic journal. The editorial board of the journal held a discussion of more than 21 hours about Zhelev’s book on October 13, 1982. The full minutes of it are also part of this archival unit (i.e. the featured item). The meeting begins with a statement of its chairman Dobrin Spasov: "The book of Zhelev has become somewhat of a public phenomenon, which deserves the full attention of sociologists. It has become something like a bestseller and if the information is accurate, its price has reached 150 Leva in second-hand bookshops [average monthly salaries in 1982 were 197 Leva]" (42). In the course of the debate various opinions were expressed; several participants criticized Yankov's review and portrayed it as propaganda without serious scientific arguments. Finally, the chairman of the meeting Dobrin Spasov assured Mitryu Yankov "that despite the heated disputes that have arisen here, we admire his courage to come up with a firm opinion of this issue, on which many experienced comrades avoid giving their opinion." The review was eventually published under the title "For Scientific, Marxist-Leninist Analysis of Fascism" (Filosofska misal, no. 12, 1982). The main accusations against Zhelev’s book were the lack of a “partisan class analysis of fascism” and plagiarism of Karl Popper's "The Open Society and Its Enemies”.

The featured archival unit also contains the open-letter response by Zhelyu Zhelev. In his letter to the editorial board he demanded that the journal either produced proof of the accusations of plagiarism or to write a public apology. If not, he threated to sue them. The editorial board of Filosofska misal was overwhelmed by letters of protest from those prominent in academia and in cultural life who expressed their “indignation that scornful articles in the spirit of the 1950s are being given space, while not giving the oppressed the opportunity to respond” (as one letter writer wrote).

The documents of this feature item, thus, not only show how the state party tried (unsuccessfully) to silence critical voices; they also make clear that there was room for open disagreement, and that the oppression of prominent thinkers provoked protest.