Hydajet Hyseni at the 1981 demonstrations 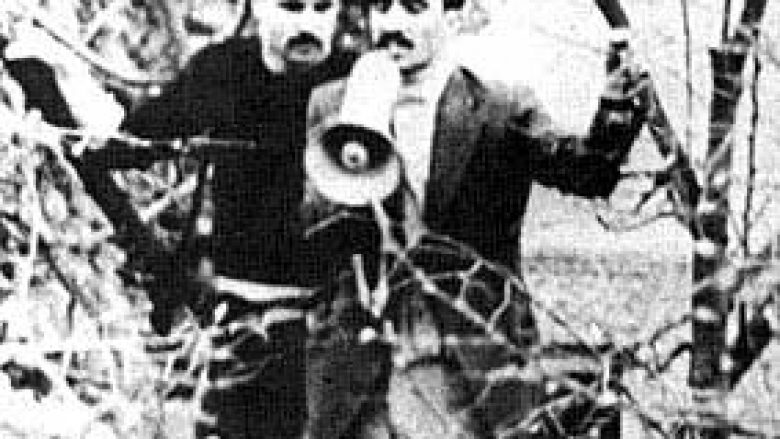 The picture of Hydajet Hyseni addressing the protesters and some of the information presented in this article are from the archival fond.

Hydajet Hyseni was one of the organizers of the student demonstrations of 1981, a former political prisoner, and a founder and well-known member of the illegal “Revolutionary Group”. In 2017, 36 years after the demonstrations, Mr. Hyseni provided additional details about his speech and student slogans during the demonstrations in an interview given to the online newspaper Telegrafi.

In 1981, due to the lack of stage or even a specific location for the protest, Hyseni addressed the students from a tree. In this interview, Mr. Hyseni describes how some of the slogans of the demonstrations of 1981 were not necessarily planned by the organizers, but rather that the main slogans and chants began spontaneously, from the protesters themselves, for instance: “Self-determination, constitution, either peacefully or through war” (Vetëvendosje, Kushtetutë, ja me Paqe, ja me Luftë) and “We are Albanian, not Yugoslavian” (Jemi Shqiptarë, jo Jugosllavë), among others.

In this interview, Hyseni explains how in essence, the student demands were patriotic but not antagonistic towards other ethnic groups. He considers how the demonstrations and slogans of 1981 did not intended to take from the liberty of others, but instead through these movements the students demanded equal rights for all ethnicities living in Kosovo/SFRY.