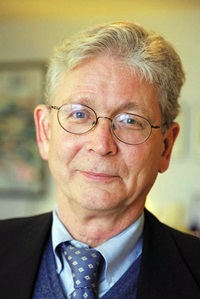 László Hámos was born in 1951 in Paris to Romanian and Slovakian Hungarian parents and was raised in a New Jersey suburb of New York. He graduated his schools already in the United States and was socialized in American Hungarian circles. After his graduation from the Mount Hermon School (Massachusetts), he studied international relations at the University of Pennsylvania. Although he did not earn a degree there, he soon was employed by a legal administration office. Besides pursuing advocacy activities, he worked at the law firm of Cravath, Swaine & Moore for 3 and a half years, then he owned a company which performed legal research and litigation support services for law firms in midtown Manhattan

He is the cofounder of the Committee for Human Rights in Romania. He wrote and edited several volumes, document compendiums, and position papers regarding human rights developments in Eastern Europe. He testified 24 times and the organization submitted more than 1,000 pages of printed testimony at hearings before various Congressional Committees. László Hámos gave presentations at numerous Congressional Human Rights Caucus briefings and represented the concerns of Hungarian minorities at nine international Helsinki Review meetings since 1980. Mr. Hámos met all five U.S. presidents since 1976: as an official delegate of the Hungarian diaspora, he took part in negotiations with Presidents Ford, Carter, Reagan, and Bush. He also lectured at several American Universities and serves as a consultant for the news media and other international human rights monitoring organizations. Furthermore, as a frequent visitor to Central Europe, he assisted a variety of U.S. fact-finding missions and did interviews with many prominent ethnic Hungarians. He continued his efforts to protect the rights of Hungarians living outside the borders after 1989, helping to improve the democratic transition by broadening the North American network of leaders of Hungarian communities in Central and Eastern Europe.