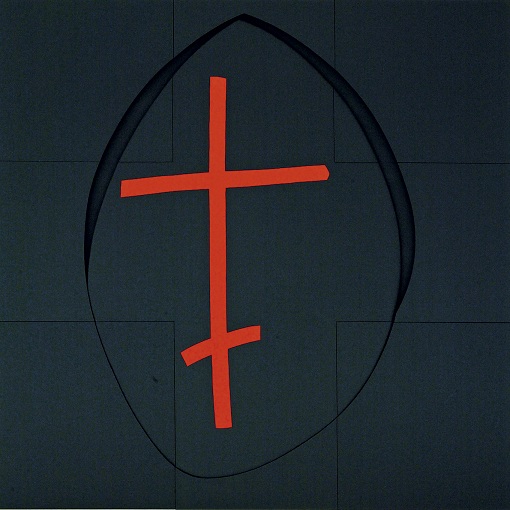 One of the commercially most successful exhibitions of Rudolf Sikora took place in Danubiana gallery from 12 March to 12 June 2011. Since the beginning of the seventies, Sikora has been an outstanding and genuine artist with both domestic and international achievements. The core of his work consists, until now, of an interest in a “world state”. The very functioning of a human society – its impact on earthly activities as well as on the environment – has seemed to him overwhelming; he has not been immersed only in local issues, but has rather attempted to “see beyond the town horizon.” He has neglected traditional fine art forms in his creative approach to the above-mentioned issues, and has called for action art as well as conceptual projects.


This global insight – to see beyond and more – has intensified over the years. Symbolic things from the past – as in some of the cycles, such as Topographies, Cuts through the civilization, Habitats, Question marks or exclamation points, or Out of town– have been transformed to a synthesising form. It is all derived from the process of his thinking about being. Thus, the vantage point is a subject to change as well. He no longer sees the “world state” through a “universe satellite” within a earthly-universal confrontation.

This new process is signalled first by pyramids and followed by either barrows or graves – Crossed barrows, Graves of suprematism, Graves for Malevich a. o.

Futurism, which together with cubism sparked, among other things, Malevich’s ideas of suprematism, was not only a dynamic time element, but also an idea of the future, despite the fact that Malevich’s elementarism resulted in point zero. The inherent interconnection of Sikora’s interpretations, or paraphrases, is primarily not a matter of form interpretation, but rather a general question on the nature of the future itself. The reflection and interconnection of societal movements and his work cannot be confused for an experience of descriptivism or its formal depiction. Where Sikora perceives objects as a black wall or black holes, it can easily be seen as pessimism, or a different form of an exclamation point if you will. We have advanced but in reality have gone back. In other words, the future does not lie where we have advanced, it has rather been somewhere else.

The stated issues have recently been tackled by Sikora with brilliant polemics. The underlying exhibition’s object is a paraphrase of Malevich’s Black square, reflected within a black cube with barred insights called Malevich’s prison. Inside the cube, Sikora left a formation of mirrors played in a spectacular virtuality which, at the same time, demonstrates the distance between Malevich’s “utopia” and the current virtual world.