Official Sentence Concerning the Case of Nicolae Dragoș (in Russian) 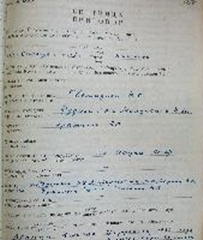 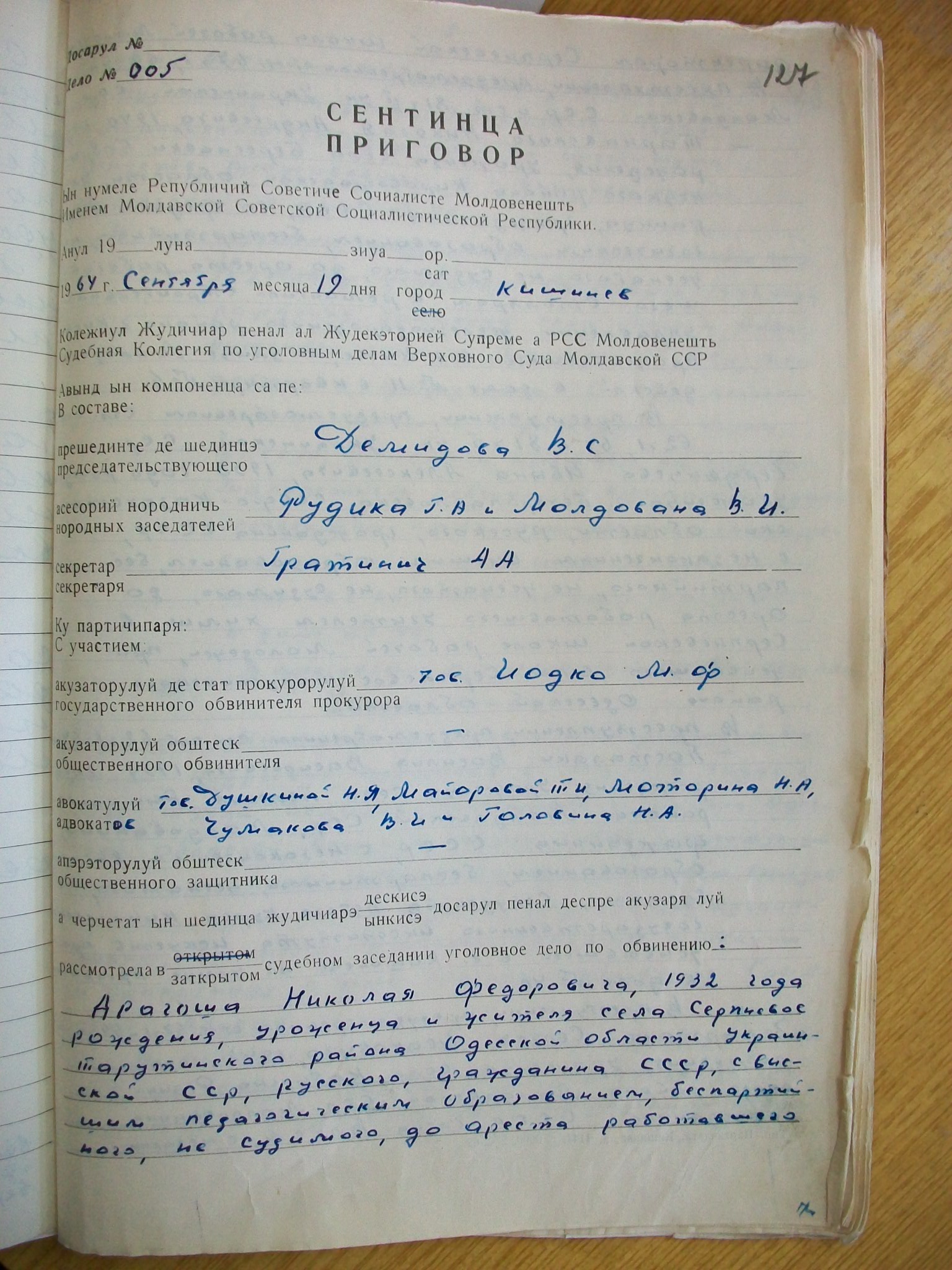 The sentence in the case of Nicolae Dragoș and his oppositional group was pronounced on 19 September 1964, following a final round of testimonies that the main defendant and his associates provided in court. The main defendants, Nicolae Dragoș and Nikolai Tarnavskii, were accused of “common anti-Soviet views” that prompted them to “create an underground organisation on whose behalf they [intended] to undertake agitation and propaganda activities with the aim of undermining and weakening Soviet power.” Judging by the summary of their actions in the text of the sentence, the two main protagonists and initiators of this group started to discuss concrete plans for spreading their message in the summer of 1962, when the plan to set up a clandestine printing press emerged. It is interesting to note that initially Dragoș planned to print the leaflets a bit later, in 1965 or 1966, after a longer period of preparation, but, “due to the difficulties of provisioning the population with foodstuffs, which emerged throughout the country because of a poor harvest, decided to do this in 1964.” This passage is especially revealing both as a rare admission of real economic problems (albeit in a secret document) and as an indication of a direct stimulus that prompted Dragoș and his collaborators to act when they did. The sentence also carefully summarises the main stages of the organisation’s activity, i.e., the collecting of addresses to which the leaflets were to be sent in several Soviet cities (including Lviv, Minsk, Kiev, Leningrad, Dnepropetrovsk, Rostov-on-Don, Kharkiv, Odessa, Chișinău, etc.) and the recruitment of new members who were entrusted with practical tasks. The sentence also clarifies the structure of the organisation’s core, which seems to have included an inner circle (composed of Dragoș, Tarnavskii, and Cherdyntsev) and an “outer ring” consisting of the other three defendants (Postolachi, Cemârtan and Cucereanu), all of them students at the Institute of Fine Arts whom Dragoș recruited through his brother, Vladimir. The text of the sentence also provides a chronological narrative of the printing and dissemination of the 1,300 leaflets produced by Dragoș and Tarnavskii between February and 15 April 1964. Dragoș’s situation was aggravated by the accusation that, while trying to recruit new members, he “attempted to create the impression that a widespread clandestine organisation purportedly existed,” thus “camouflaging his own role in its founding and in the producing of the anti-Soviet leaflets.” Dragoș and Cherdyntsev were also accused of writing a letter to the First Secretary of the CPSU, Khrushchev, in which they purportedly “articulated calumnies concerning the policy of the communist party, against Soviet democracy” and “threatened the CPSU, on behalf of the clandestine organisation that, if repressive measures were to be applied against the DUS, the latter’s members would respond by similar measures, up to and including organising strikes and public demonstrations.” Several copies of this letter were later confiscated by the KGB from the defendants’ apartments. Given the fact that over 850 leaflets were distributed in various Soviet cities, it is obvious that the Soviet authorities were worried about the potential impact of the organisation and about the extent of its informal network. Despite Dragoș’s insistence that he did not pursue the goal of “undermining Soviet power,” all the defendants were found guilty of distributing anti-Soviet leaflets in which they propagated “vicious calumnies concerning the policy of the party and of the Soviet government, the Soviet state and social order, and the living conditions of the workers in the USSR.” The group was accused of extrapolating from certain particular problematic issues in the economic sphere and the “temporary difficulties” faced by the regime in order to recruit “politically unstable” citizens, mainly from student circles, and to manipulate them so as to achieve the organisation’s “hostile goals.” Consequently, Nicolae Dragoş and Nicolae Tarnavskii were sentenced to seven years in a high security labour camp. Ivan Cherdyntsev and Vasile Postolachi were sentenced to six years in a high security labour camp, while Sergiu Cemârtan and Nicolae Cucereanu received a five-year prison term, under similar conditions. Additionally, Dragoş and Tarnavskii were condemned to three years of prison according to article 81, paragraph 2, of the Criminal Code of the Ukrainian SSR, for stealing the printing equipment from Tatarbunar. The sentence also included a provision relating to the confiscation of the property belonging to the main defendants. As the latter possessed no significant property, the confiscation measure was suspended. The sentence was annulled in February 1989 by a special decision of the Supreme Court of the Moldavian SSR, by which Dragoş and his co-accused were rehabilitated. However, the additional three-year prison term for stealing the printing equipment was left standing by this court decision. The case of the Democratic Union of Socialists, closely linked to the context of the “thaw,” is emblematic for its openly political focus, its supra-national scope, and the possible parallels to much more significant similar cases in the Soviet Bloc. It is also interesting because of its “transitional” character. Although a direct product of Krushchev’s era, it also foreshadowed some of the topics that would be salient in the “dissident” movement on the Soviet periphery in the late 1960s and early 1970s.