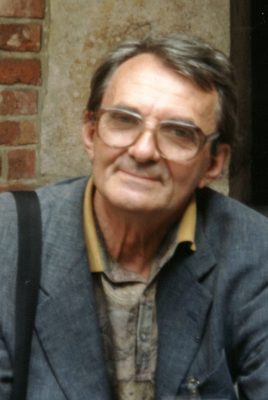 Romulus Rusan (b. 13 March 1935, Alba Iulia – d. 8 December 2016, Bucharest) was a Romanian writer, who was most noted, and has remained in the collective memory, for his postcommunist activity of recovering the communist past. He was a founder of the non-governmental organisation Civic Academy and director of the International Centre for Studies into Communism within the Sighet Memorial to the Victims of Communism and to the Resistance, which he initiated together with Ana Blandiana. A graduate of polytechnic studies, Romulus Rusan made his debut as a writer in 1954, with articles of literary criticism in the Cluj magazine Steaua (The star). He was the editor of several regional publications, and for almost two decades he had a cinema column in the magazine România literară. He was twice (1964 and 1982) awarded prizes for prose by the Romanian Writers’ Union. He was the author of more than ten volumes of short prose, travel writing, and film criticism.

A key figure in the Memorial to the Victims of Communism and to the Resistance, Romulus Rusan co-organised, together with Ana Blandiana, the series of Sighet Summer Schools (1998–2014) and of Doors Open Days, when the victims of communism are commemorated. Above all, the activity of Romulus Rusan is linked to the International Centre for Studies into Communism, whose academic director he was until his death in 2016. In this capacity, he wrote, edited, and coordinated numerous essential books of recent history, all published at the Civic Academy Foundation publishing house. Among these may be mentioned: Cronologia și geografia represiunii comuniste: Recensământul populației concentraționare (The chronology and geography of communist repression: The census of the prison camp population)(2007); România în timpul războiului rece (Romania during the Cold War)(2008); Sfârșiți odată cu trecutul negru (Finish once and for all with the dark past)(2010); Morți fără morminte în Bărăgan (Death without graves in the Bărăgan)(2011); and Cartea morților (The book of the dead)(2013). His most important contribution is probably the estimate of the total number of victims of Romanian communism at around two million. The “Census of the Prison Camp Population: 1945–1989” project, which he coordinated, was based on the statistical study of 86,000 penal registration files of political prisoners. The database, which has been added to and used throughout the history of the Memorial, also now includes around 10,000 certificates of death in prisons and labour camps and around 17,000 decrees of pardon. Romulus Rusan was also a member of the Presidential Commission for the Analysis of the Communist Dictatorship in Romania (2006). He wrote two chapters of the Commission’s Report, “The Chronology and Geography of Communist Repression” and “The Census of the Prison Camp Population: 1945–1989,” which also appeared separately in 2007 in the volume of the same title mentioned above as part of the Civic Academy Foundation Publishing House collection “Ora de istorie” (History class).

Romulus Rusan played a decisive role in conceiving and coordinating the publishing programme of the Civic Academy Foundation. He produced seven distinct collections, to which may be added books published outside the collections, amounting to over 120 titles totalling over 45,000 pages. The ten international symposia at the Sighet Memorial generated the “Analele Sighet” (Sighet Annals) series (ten volumes totalling over 7,300 pages), which constituted a source of great importance for the compilation and organisation of the Sighet Museum collection (http://www.memorialsighet.ro/prod-cat/ro/libraria/analele-sighet/). A second important and long-lasting collection was born a few years later under the title of “Biblioteca Sighet” (Sighet library). This series, numbering over twenty titles, includes both thematic anthologies and books by one or two authors. “It was born,” Romulus Rusan related, “out of the suggestions and collaborations of our guests both well-known and, more often, unknown, who sought us out, gave us ideas, manuscripts, biographies.” Indeed the collection includes books by scholars of international prestige such as Dennis Deletant and Thierry Wolton (http://www.memorialsighet.ro/prod-cat/ro/libraria/biblioteca-sighet/). A third series produced by the publishing department of the International Centre for Studies into Communism is entitled “Documente” (Documents), and comprises over ten volumes whose role is to supplement the studies, political reports, memoirs, and monographs printed in the “Sighet Library” collection. According to Romulus Rusan, the books in the “Documents” series are focused on documents “that managed to escape the unacknowledged but real censoring of the archives” (http://www.memorialsighet.ro/prod-cat/ro/libraria/documente/). “Ora de Istorie” (History class) is another collection initiated by the International Centre for Studies into Communism under the direction of Romulus Rusan. It is targeted in the first place at young people. On the one hand, Romulus Rusan remarked, the initiation of such a collection was based on the observation that “historical knowledge has declined year by year, as the curriculum has decayed, imposing useless and sterile textbooks.” On the other hand, he said, “Through chronologies and succinct, but information-packed texts, these books offer the pupils of today a basic knowledge of recent history (which is sometimes welcome to their parents too)” (http://www.memorialsighet.ro/prod-cat/ro/libraria/ora-de-istorie/). In addition to this collection with its numerous titles, there are others, also produced under the direction of Romulus Rusan, but on a smaller scale: “Interval,” “Viaţa cotidiană” (Everyday life), “Comemorări” (Commemorations), and “Multimedia.” The International Centre for Studies into Communism also has a small library made up of books “outside the collections,” including books by Dennis Deletant, Corneliu Coposu, and Vladimir Bukovsky. “The masterpiece of this section is the monumental 880-page tome Cartea Morţilor (The book of the dead), the first list of tens of thousands of human sacrifices in the postwar period, supported by a detailed introductory study,” remarks Romulus Rusan.

Having started out as a department of oral history, the International Centre for Studies into Communism has also made its contribution to this direction of research in a collection of distinct books entitled “Istorie orală” (Oral history). It is, remarks Romulus Rusan, “the most productive collection, which succeeds in bringing together in an epic and thematic way the fruit of thousands of hours of recordings from the first years, together with conferences and debates, charming in their innocence, between teachers and pupils, at the Summer Schools that started in 1998. Inasmuch as the written and audio documentary base in the possession of the Civic Academy Foundation is immense, it is to be expected that we will have many titles in this collection from now onwards” (http://www.memorialsighet.ro/prod-cat/ro/libraria/istorie-orala/). In fact the remarkable archive of oral history created by the International Centre for Studies into Communism numbers to date approximately 3,600 entries/ recordings, totalling over 6,400 hours. Romulus Rusan was the editor of the first compendium of oral history of the period 1944–1989, with over 600 authors. In addition, the International Centre for Studies into Communism, which he coordinated, has accumulated an archive of over 10,000 photographs, both black and white and colour, in classic format and, partially, in digital format. The Centre’s archive of documents numbers 1,540 files (with over 20,000 pages in total), together with 11,700 pages with extracts from the register of births, marriages, and deaths (for those who have died). It also holds approximately 93,000 penal registration files.

In short, Romulus Rusan was one of the Romanian personalities who campaigned most consistently for the maintenance of a living memory of communism and, above all, of its numerous victims. “Such a sense of sacrifice might be considered utopian, if history were to end in our days that are muddied and disfigured by optimism. Fortunately, history never stops in the marshes, but aims for the heights. And all that may seem useless – sacrifice, honour, upright character – remains in the heritage of hope,” said Romulus Rusan, stating a profession of faith. Comparing the roles they each played, Ana Blandiana recalls her late husband as follows: “I was a sort of spokesperson, the image of the institution; I had to obtain money, to make the image of the Memorial grow perhaps even faster than the Memorial itself, so as to become a point of support. And in this connection, I really want to say that I was extraordinarily impressed to discover something very special, after the death of my husband. I always felt a sort of remorse because it seemed to me that, because of me, my husband was not sufficiently seen. And to a certain extent, that was indeed true. And it was only when he died that I discovered that he was seen, that what he did was visible in the public space. The way almost everyone wrote after he died was proof that they had realised that he had been the one who had created everything at Sighet. About me, yes, they spoke, because I spoke. But the content was created by him, fundamentally. In ever room there was the fruit of research that hadn’t existed before. And he had a decisive role in connection with all that.”