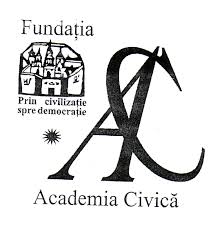 Any discussion of the Civic Academy Foundation quickly turns into a discussion of the Sighet Memorial, which is the Foundation’s main project. In fact the Civic Academy Foundation was founded in 1994, as a direct consequence of the action taken from 1992 onwards by Ana Blandiana with a view to organising a memorial dedicated to the victims of the communist dictatorship in Romania. At the beginning of 1993, Ana Blandiana sought the support of the general secretary of the Council of Europe, Catherine Lalumière, for the transformation of the Sighet prison into a memorial museum, and submitted the project for the world’s first Memorial to the Victims of Communism. She had drawn up the project together with Romulus Rusan. As Ana Blandiana recalls, the sinuous path taken by the Memorial from the idea to its being put into practice started from Strasbourg and finished in Sighet: “At first, this idea was more a theoretical one. In 1993, when I submitted it to the Council of Europe, it was a theoretical idea – one among many other ideas of the Civic Alliance. There was a large group of intellectuals here who were thinking along the lines of how a dictatorship should be turned into a state run by the rule of law. What had to be done for this to happen? And what had to be done distinct from the political world – where, frequently, the opposite seemed to happen And we had all sorts of plans for this, all sorts of ideas. Well, among these ideas, the one about the Memorial to the Victims was theoretical, very general; it was so theoretical that we didn’t think for a moment how we could support it financially, in practice. I proposed it to the Council of Europe, and they accepted it very quickly. In brief: I had been invited to give a lecture about human rights at Strasbourg, at the Parliamentary Assembly of the Council of Europe. After the lecture, there was a banquet, and I was seated at table next to Catherine Lalumière, who was then the head of the Council of Europe. [...] I asked her something along the following lines: Don’t you think that just as you set up a centre for the study of Nazism, you should also set up one for the study of communism, whose horrors are much less well-known? And I said – this really came to me on the spur of the moment – there’s a prison where the elite of interwar Romania was destroyed, at Sighet. And I added: it would be an ideal place for a memorial to be set up, a study centre. It would be an important moment of knowledge – in fact the discussion there at Strasbourg had been about how the two Europes could get to know one another, Western Europe and the Europe that had just emerged, inasmuch as it had emerged, from communism. My thesis was this: that it is not sufficient for these two Europes to unite their public policies but that they must somehow come to unite their obsessions and, basically, to know each other and to know each other’s great traumas. [...] This was the turning point. This was where it all started. Mrs Lalumière said: It’s a wonderful idea; make a project! I made this project, together with my husband. This was in 1993. I submitted it and waited for the answer. And the answer came, first of all by phone: your project has been accepted. We were in the seventh, the eighth heaven with joy; it was a great success for the Civic Alliance; we held a press conference in which we told everything. The official consequence was that in the official newspaper of the Văcăroiu government the title ‘The Sacrilege of Sighet’ appeared two days running in big letters with a text explaining that we were selling the sufferings of the Romanians to the Council of Europe. At that time we were not integrated in the European structures; thus they were ‘defending’ the country, and we were enemies.”

In May of the same year, 1993, the first symposium took place: “The Sighet Memorial: from Historical Truth to the Judgement of History.” What the practical realisation of such a memorial would involve was not clear even to the initiators at first, as Ana Blandiana repeatedly stresses: “In the beginning it was more a theoretical idea, very general. It was so theoretical that we didn’t have any idea that we would have to manage somehow to support it financially, in practice,” Ana Blandiana recalls, with some amusement. In mid-April 1994, a Council of Europe delegation came to Romania to visit Bucharest and Sighet. The suggestion to set up a foundation, which would be able to materialise and then to administer the Sighet Memorial project, came from the Council of Europe. And so, on 21 April 1994, Ana Blandiana, together with another 175 founding members, set up the Civic Academy Foundation, its general aim being civic education through knowledge of the recent past of Romania and of Eastern Europe. In October 1994, in accordance with a decision of the local council of Sighetu Marmaţiei, the prison building in the centre of the city was assigned to the Civic Academy Foundation. Within a very short time, repair work on the building started, first of all on the exterior walls, with funds from the German Hanns Seidel Foundation and from private donations.

Over the years, the prestige and public impact of this substantial project have grown in an impressive manner through the number of summer schools, international conferences and seminars, academic and popularising publications, thematic visits, and research projects on the recent history of Romania in the East European context. Among these may be mentioned the ten annual symposia, held from 1993 to 2002, which resulted in ten volumes totalling over 7,300 pages; the numerous travelling exhibitions, among them “Memory as a Form of Justice” (2011–2013), “Corneliu Coposu and Society” (2014); “Black Whitsun: The Deportations to the Bărăgan” (2011–2014); “The Danube–Black Sea Canal: A Programmed Cemetery” (200–2014); the summer schools organised annually starting in 1998; and the annual commemoration of the victims of communism on the occasion of Doors Open Day, which has taken place since 2003 on Ascension Day, which is also regarded as Heroes’ Day.