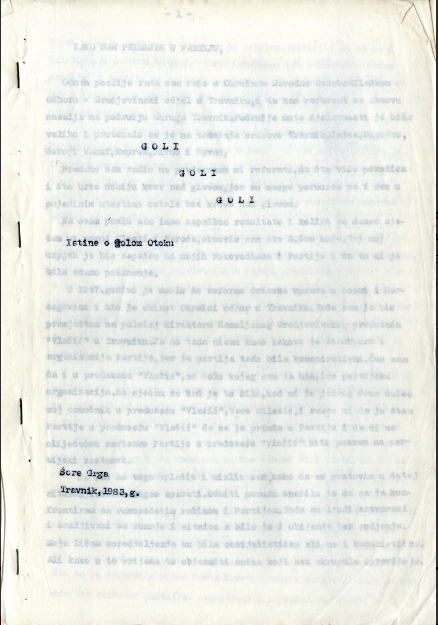 “Goli Goli Goli – The Truth about Goli otok” is a typewritten text about the days of captivity on Goli otok, but it is partially different from the original, and begins with a short biography of the author before his arrest, including specific events that preceded the arrest. Šore spoke about his arrest in Travnik in June 1949 and his transfer to the prison in Sarajevo. On September 1949, about 400 detainees were transported by train from Sarajevo to Herceg Novi, and then by truck to the former Austro-Hungarian fortress on Cape Oštro at the entrance to Boka Kotorska Bay. There, Šore's group joined detainees from Montenegro, and then all boarded a ship that took them to Goli otok. This was the first group of "Cominformists" who came to Goli otok. Before them, there was a smaller group of people on the island who welcomed them with clubs, curses and verbal abuse. Šore spent three years in this environment, in which he experienced the most brutal methods of political “re-education.” Immediately upon their arrival at the prison camp, all inmates had to publicly present facts about their "hostile work" against the communist regime and plead guilty. Also, all inmates had to go to the State Security Administration office to report all the “enemies” among inmates or among those who were still outside the prison camp. Political meetings were held regularly in the prison camp, where the criminal conduct of a particular inmate was discussed based on evidence obtained by mutual spying. Furthermore, ‘cultural-educational’ work was carried out every night, which consisted of reading Party literature, making posters, writing pamphlets, and even short comedy shows. In all forms of cultural and educational work, Josip Broz Tito and his policy in conflict with the Cominform Resolution was praised by the detainees (Interview with Peić Čaldarović, Dubravka).

The prison camp's administration punished inmates with brutal methods that consisted of heavy physical labour, inciting violence among inmates, psychological abuse, and deprivation of food and water. According to Šore's memories, the main penal measures in the camp were: boycotts (severing of any communication with an inmate, overtime labour and reduction of food and water rations), carrying "Anita" (exhaustion by carrying a heavy load), tracer (exhaustion caused by carrying heavy loads with another inmate), the swan (exhaustion by carrying a heavy load together with six other detainees) and the chamber-pot ‘honour’  (guarding the wooden lavatory in the barracks many times per day or for many days). The physical exhaustion of inmates was done to psychologically transform them, or erase their personalities, to create persons loyal to the Party led by Tito. Inmates who underwent been internal punishment or refused to submit to political "re-education" ended up in Building 101. Its purpose was to break disobedient detainees with more difficult conditions of daily labour and more extreme torture methods (Interview with Peić Čaldarović, Dubravka).

Šore described each of these situations and methods of political "re-education" precisely from his own experience or based on the example of one of his fellow inmates. He illustrated some of the most difficult aspects of everyday life with his own drawings under the heading: Tracer/Carrying Heavy Rocks, Water and Food/Boycott by the Wall, Chamber-pot Honour /Swan (Interview with Dubravka Peić Čaldarović).