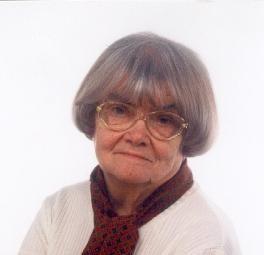 Sanda Stolojan (1919–2005) was one of the prominent members of the Romanian exile in Paris, very active in organising public protests against the regime of Nicolae Ceaușescu and privileged by her position of official translator into Romanian for several presidents of France. She was born on 19 February 1919, in Bucharest, in a family of intellectuals. She was the granddaughter of the writer Duiliu Zamfirescu and daughter of diplomats, which fundamentally influenced her professional career. She received a fine education both in interwar Romania, and especially abroad, because her parents took her with them to the countries where they were sent on diplomatic service: Italy, Germany, Holland, Brazil, Portugal, Poland, Denmark, and France. She graduated from high school in Paris in 1937, after which she returned to Romania, where she enrolled at the Faculty of Letters and Philosophy of the University of Bucharest. In 1943, she married the engineer Vlad Stolojan Filipescu, with whom she tried to flee to the West in 1949. They were captured and sentenced to prison for acts preparatory to illegal emigration. They were political detainees between 1949 and 1950. Later, between 1958 and 1961, he was again arrested for "hooliganism." They were also expelled by the communist authorities from their own house and dispossessed.

In Romania, Sanda Stolojan worked as a translator and as a clerk at a typography co-operative. She emigrated to France with her husband in 1961, where she worked as an official interpreter of Romanian for French presidents. She was also actively involved in the activities of the Romanian exile community. She was a collaborator of Radio Free Europe, coordinated the League for the Defence of Human Rights in Romania (1984–1990), based in Paris, and co-founded a literary magazine, publishing mainly writers from Eastern Europe, Les Cahiers de l'Est. She also published poetry and prose in Romanian journals in the West, including Limite, Ființa Românească, Revista Scriitorilor Români, Ethos, Dialog, Lupta, Cuvântul Românesc, Curentul, Contrapunct, România, and La Nation Roumaine, as well as in such magazines as Revue de Belles-lettres (Geneva), Creation, and Polyphonies (Paris). Some of her volumes of lyrics were published by various foreign publishers. In the same vein, she wrote a number of articles of literary criticism and essays in foreign publications such as Journal de Genève, Esprit, Le Monde, L'Alternative, Lettre Internationale, and ARA Journal. In 1980 she published in English a monograph on her grandfather, the writer Duiliu Zamfirescu, which appeared in the Twaine World Authors collection in Boston, she translated into French Lacrimi și sfinți (Tears and saints) by Emil Cioran in 1986, and poems by Lucian Blaga contained in the anthology L'etoile la plus triste in 1992. In 1989, she was awarded an Honorary Diploma by the American Romanian Academy for her work on human rights. After the collapse of the Communist regime in Romania, she returned to her native country, without establishing herself here definitively. She was involved in a series of actions aimed at helping to rebuild democracy in her country of origin. Since 1994, several books of her have been published in Romania, principally her journals kept between 1961 and 2001, but also a volume about her visit to Romania with President Charles de Gaulle in 1968, as well as her correspondence with Constantin Noica during the Communist regime. From 2003 until her death she was part of the Moral Guarantee Council of the National Institute for the Memory of the Romanian Exile, a body that brought together Romanian personalities in exile. She passed away on 2 August 2005 in Paris.

Stolojan, Sanda and Vlad Stolojan. 2009. Să nu plecăm toți odată: Amintiri din România anilor 1950(Let's not go away all at once: Memories of Romania in the 1950s). București: Humanitas.