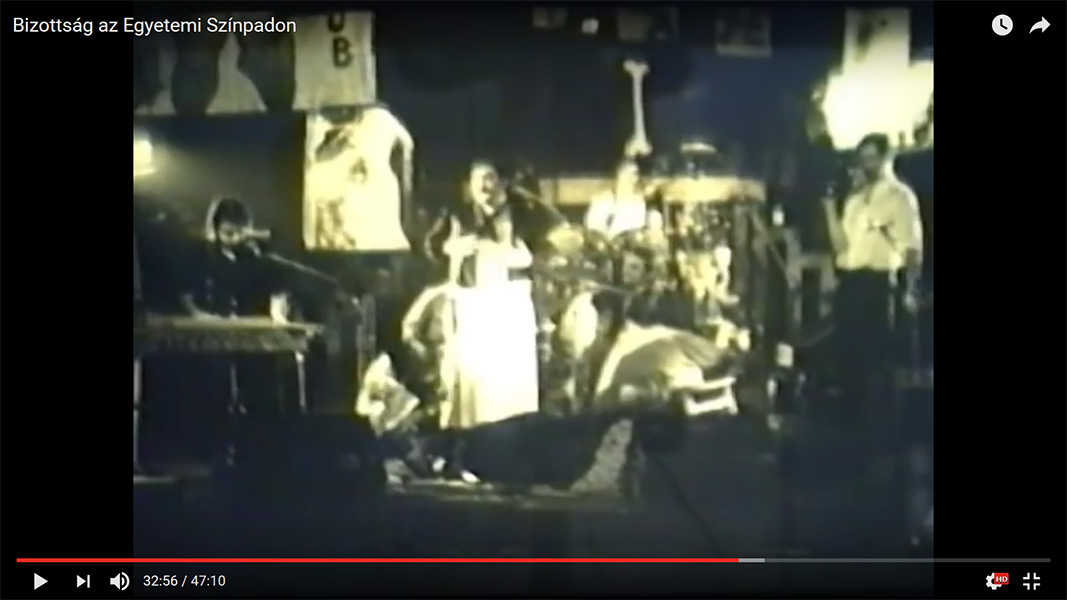 The material was recorded in February 1984 at the University Stage, Budapest in the third productive period of the band, after the release of their first disc, during the concert entitled Aerobic. The performance was carefully arranged and included first-time performances of new songs, large scale stage design, and costumes painted for the occasion.

The most interesting aspect of the video – beyond its documentary value – lies in the history reflected of its mediality: according to the caption it was shot by a professional television team with three cameras, but it never was broadcasted, as several small characteristics of the material suggest, for example some parts of the image are missing and black blanks have been inserted, while the sound continues.

This YouTube video is most probably the digital version of the once half-cut material: it was abandoned at this stage, when it turned out that permission would not be granted to broadcast it. However, someone archived a copy on VHS. The quality of the image suggests that this tape was digitalized then and published on the internet 32 years after the event.

There are other interesting details: the method of editing songs separately breaks the original span of the concert, some parts were clearly left out; the cameramen sometimes stands in front of the performers; the totals were recorded through the reflecting window of the technician’s cabin, so the stage design is not very prominent.

However, the pillows fixed on the performer’s garb function perfectly. The stage presence of the artists is elemental and provocative. They restart the performance of several songs, and the program is intertwined with various spontaneous actions. Some of the songs sound provocative even today.

The record is a valuable document even in its fragmentary state. Although it shows only an episode from the history of the band, many interesting details of its spirit “come through” for the Hungarian-speaking audience (as there are no subtitles).