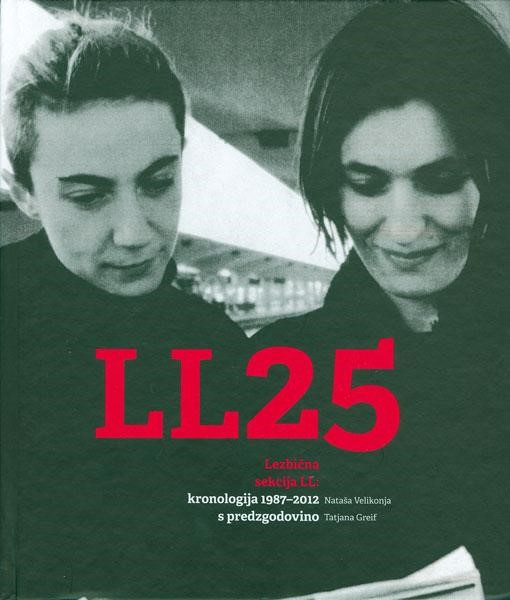 As a way of commemorating the twenty-fifth anniversary of the Lesbian Section ŠKUC LL, Tatjana Greif and Nataša Velikonja co-authored an almost 400-page volume that traces the history of not only ŠKUC LL, but also of lesbian culture, art and the movement in Slovenia in general. The chapter “Lesbians Before the Lesbian Movement” (“Lezbištvo pred lezbičnim gibanjem”) gathers in one place all knowledge available about the lives and work of women who engaged in sexual and/or emotional relationships with other women (mostly prominent intellectuals and artists), from the late 19th century up to the emergence of the lesbian and gay movement in 1984. Also described are the circumstances and some of the situations homosexuals and lesbians faced during socialism, especially at the time when same-sex relations were criminalized in the Criminal Code of Yugoslavia. Furthermore, the book delves in great detail into the 1980s gay and lesbian social life in Slovenia, focusing on the social climate and cultural events that created the conditions for the first gay film festival in socialist Europe that took place in Ljubljana in 1984. The book also recounts the circumstances surrounding the cancellation of the fourth gay film festival, when the authorities exerted pressure on the organizers. The organizers interpreted this pressure and the media attacks to which they were subjected as a direct ban. This event, along with intensive networking with other democratic and civil groups, greatly contributed to the politicization of the emerging LGBT movement and the gradual shift it made from the cultural to the activist sphere (Velikonja and Greif 2012, 73-74). The central and the longest part of the volume chronologically maps ŠKUC LL's activities and development in the period 1987-2012. While researching and writing, Grief and Velikonja heavily relied on archival materials from the Lesbian Library and Archive, reprinting many illustrations and photographs from the collection in the volume itself.