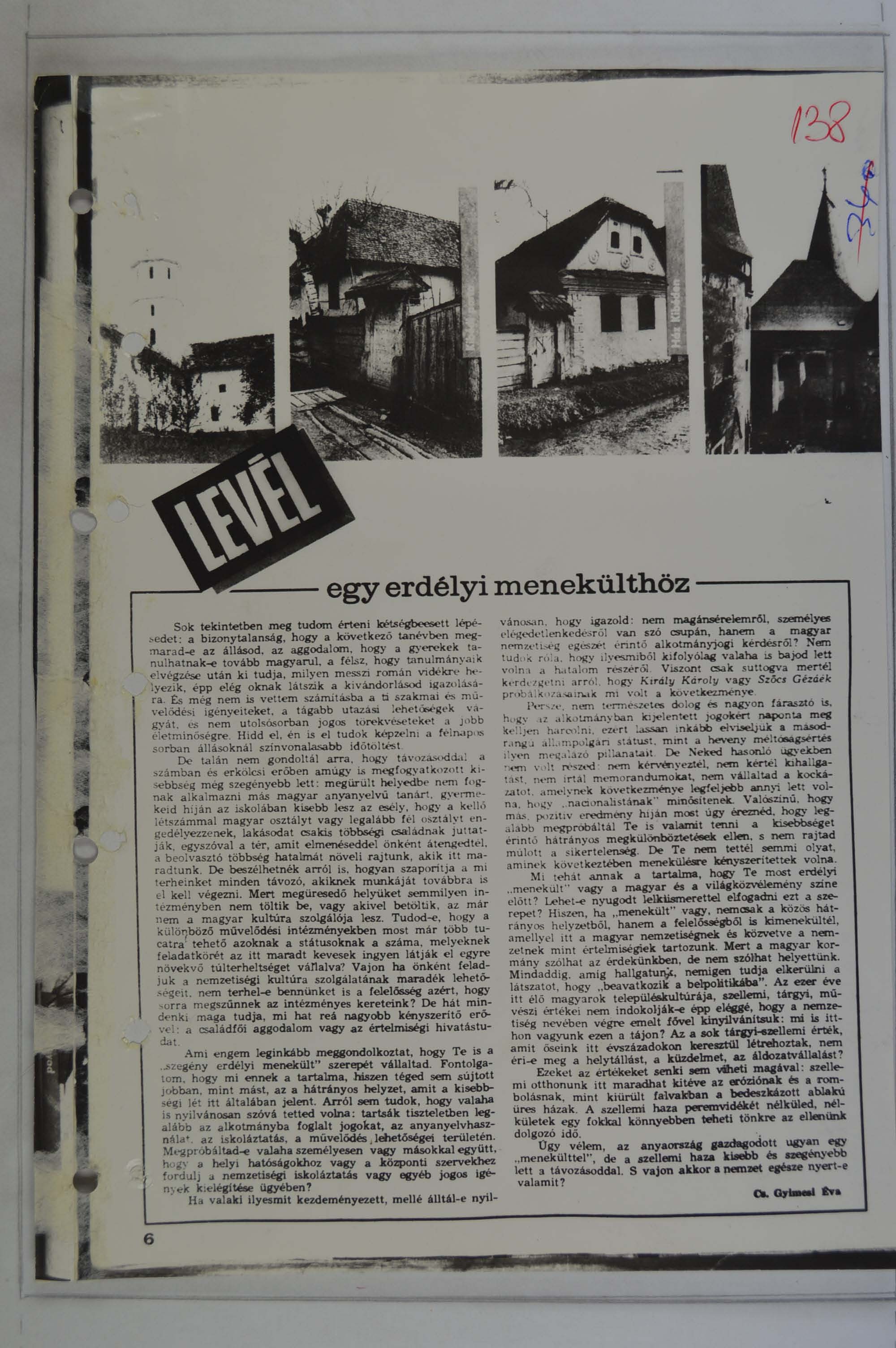 This work was finished in February 1988. It was published in Budapest on 17 July 1988 in the twenty-fifth issue of the weekly national youth magazine Magyar Ifjúság (Hungarian Youth), the periodical of the Hungarian Union of Communist Youth. In her writing Gyimesi condemns the fact that a Hungarian intellectual who had suffered no harm as a result of his/her previous actions should declare himself/herself a “Transylvanian refugee.” She understands the existential insecurity of the individual in question, the fear of losing one’s job in the near future, the worries about one’s children’s possibilities of further studying in Hungarian and also the fear that one’s children might be placed in faraway Romanian regions after graduation. In spite of this, besides the numerous arguments in support of emigration, Gyimesi calls for remaining in the home country. She points to the fact that leaving the country only results in a greater reduction of the already thinned and weakened Hungarian minority and the space voluntarily given up by the addressee only increases the control the communist regime has on those left behind. Gyimesi even passes a judgment on the person embracing the role of the “poor Transylvanian refugee.” She reproaches that he or she is not hit harder by the disadvantageous situation than what is generally implied by minority existence in Romania. She goes on to reproach that the addressee never – either individually or jointly – stood up publicly – by means of petitions or memoranda –, never did anything in order to ensure that constitutional rights regarding the use of the mother tongue, education, and cultural life were respected. The consequences of these efforts would have been labelling as “nationalist” at most, but “having to put up a daily fight for the rights stipulated in the constitution is not a natural thing and is also very tiring.” She states that the “refugee” did not only flee from the common disadvantageous situation but also from the responsibility he/she as an intellectual owed to the Hungarian ethnic minority and indirectly to the nation (ACNSAS, I017980/1, 138–141).

This text published in Hungary in July 1988 rendered Gyimesi’s situation at the time even more difficult as she mentioned the violation of human rights in Romania in various respects, thus adding to the series of accusations brought against her. Already in 1987, the Cluj county Securitate had transmitted her case to the directory board of Babeș-Bolyai University and instructed the rector to commence disciplinary procedure against her. In this regard mention must be made of the disciplinary meeting of 26 July 1988 when the Executive Board of the University Senate issued a last warning to Gyimesi, and disposed that a three-member committee should supervise the conduct and professional activity of the professor, suspending her academic status until a decision was reached (Cs. Gyimesi 2009).

At the end of the 1980s, the “letter” and such writings in general had the value of a gesture; standing up for one’s views, expressing one’s opinion was in itself an irregular act – their main merit was the disruption of the silence of dictatorship (Király 1993). Relatively few people could hear about or read the critical writings of the final years of dictatorship. In an attempt to compensate for this public ignorance, Gyimesi published in 1993 her volume Homesickness in the Home Country containing her works written in the 1980s, considered in the context of that time as dissident, including studies, private and public correspondence, and texts of lectures and conversations, along with her shorter works written after the collapse of the Communist regime up to the summer of 1992 (Cs. Gyimesi 1993).