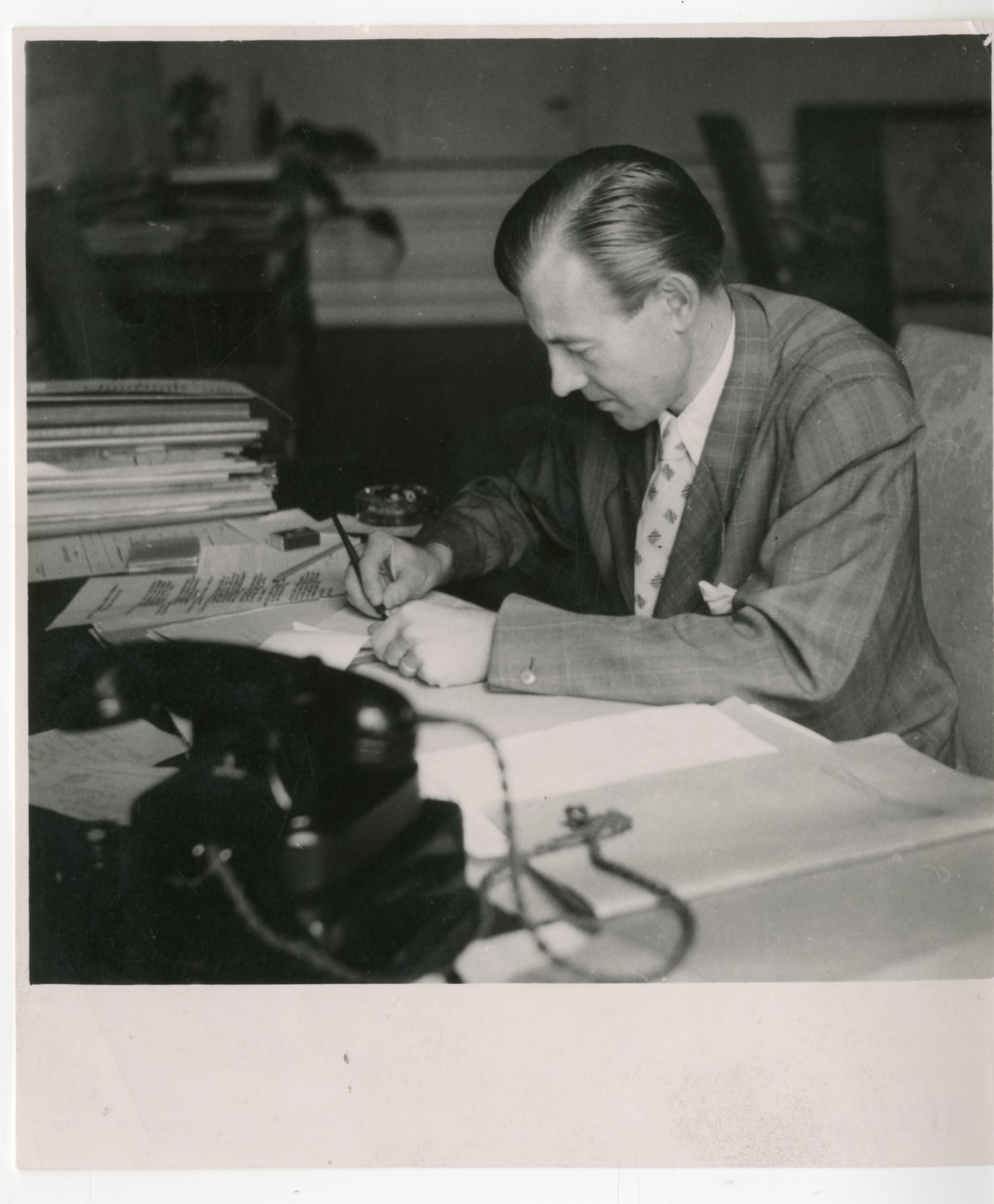 Mojmir Vanek was a scientist, professor of history and journalism, dissident, organizer of Czech cultural life in Switzerland, and also chairman of the Swiss group of the Society for Science and the Arts.

Mojmir Vanek was born on February 9, 1911 in Přerov. He came from a family of teachers and musicians, which influenced his later interests and focus. He attended a grammar school in Přerov and as one of the best pupils of Czechoslovakia, he was awarded a scholarship by the Czechoslovak Ministry of Education to complete his secondary school in France at the Lycée National in Nimes. He then completed his Bachelor's degree at the University of Montpellier and later graduated from Charles University in 1936, where he received his law ldegree. He then completed his studies in Vienna and Krakow. Prior to World War II, he studied history and cultural history (including the history of music) at the Faculty of Philosophy of the Charles University in Prague while also working as an assistant at the Faculty of Law of Charles University.

During the war he worked as the presidential secretary of the Czech Academy of Sciences and Arts. During the Nazi occupation, they were granting support from so-called Jewish funds to young artists and musicians who often worked under the cover name, mainly for racial reasons, among others for example now famous Czech composer Miroslav Kabeláč. After the war, he was president Edvard Beneš's personal secretary and in 1946 he was released on the orders of President Benes and Minister Jan Masaryk to serve as Senior Counsellour at the UNESCO Secretariat, first in London and then in Paris where he became the first Director of the Arts and Music Section.

His work was interrupted in February 1948 when he was expelled from the Office of the President of the Republic on 26 February 1948 because of the decision of the so-called Action Committee. In 1949, he was arrested along with Milada Horáková and four other colleagues. On 21 July 1950 he was convicted by the so-called state court in Prague for alleged high treason and spying and sentenced to 18 years of heavy imprisonment. He served a punishment of eleven years, of which he spent seven months in solitary confinement at Ruzyne Prison without walks, visits or correspondence. The remainder of his sentence was served in Prague-Pankrác, Česká Lípa, Plzeň-Bory, Pardubice, Leopoldov, Uranium mines in Příbram, Mírov and Valdice. This conviction was expunged from his criminal record only in 1990, however, in 1960, Mojmir Vanek was released from prison during the amnesty conditionally for five years.

He then worked as a metal worker for a few years, and in 1967 he started working at the National Gallery in Prague. In 1966 he also became secretary of the Congress of the International Association of Fine Critics (AICA) in Prague, which he founded in 1946 while working at UNESCO.

In 1969 he went to Geneva, Switzerland, at the invitation of Musée d'art et d'histoire and where he also received the right to asylum as a political refugee in Switzerland. There he collaborated with the Musée d'étour d'Historia de Geneve. He lectured at universities in Geneva, Lyon and Tours. Mojmir Vanek is the author of about 20 studies, articles and translations of scientific papers and many dozens of articles in the daily press.

Mojmir Vanek actively engaged in culture. He saved the famous Prague Quartet before the break-up and organized several series of concerts in Prague. Later, he also did the same thing for the Czech Nonet. In 1940 he was appointed to be a member of the Society for Contemporary Music. After the end of the war he became a member of the constituent committee of the Prague Spring International Music Festival. During his work at UNESCO, he was the main organizer of the International Art Festival, which was launched on 28 October 1946 by a festive concert of the Czech Philharmonic Orchestra. After February 1948, he could no longer continue his cultural activities until his emigration to Switzerland, where he continued to do so. Mojmir Vanek organized exhibitions of Czech art at the Museum of Art and History in Geneva, the Kunsthaus in Zurich, exhibitions of Czech graphics at the museums in Lausanne, Geneva and La Chaux-de-Fonds and others. In 1971, after the establishment of the Swiss Society of Science and Arts, based in New York, organised the Symposium “Culture and Freedom” to celebrate the 60th anniversary of Czechoslovakia. It was organized by Mojmír Vaněk in Geneva and many prominent scientists from all over Europe spoke at this symposium. This event had a huge response in the Swiss press. Likely it was due to this event that Mojmir Vanek and his wife Olga had their Czechoslovak citizenship revoked. Vaněk became an outstanding promoter of Czechoslovak music abroad and continued to host many concerts and exhibitions. For his cultural activities, he was awarded the French "Palmes académiques" in France and received a silver medal from Charles University in 1991.

He is also responsible for the fact that the Geneva City Council named one street after President Tomas Garrigue Masaryk.