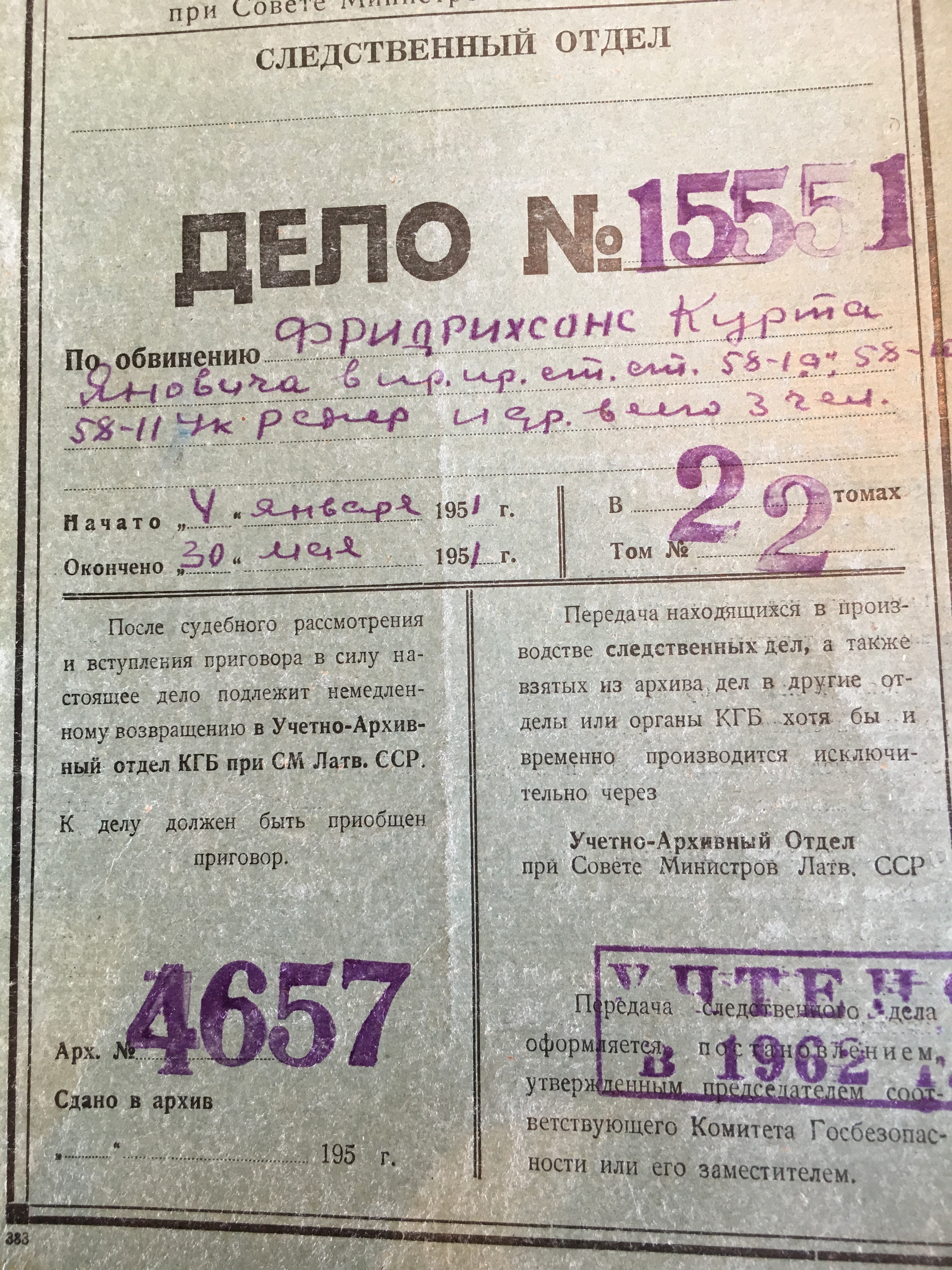 In 1951, a group of 12 people, mainly actors, poets and translators, were arrested and sentenced to between seven and 25 years in prison, for ‘treason to the Motherland’. Although the charges differed in each case, the main charge common to all of them was being a member of an anti-Soviet group, whose main activity was anti-Soviet propaganda, that is, they met more or less regularly between the autumn of 1945 and the spring of 1947, in order to discuss books, plays, etc. Although the defendants claimed that political topics were not discussed at their meetings, they were charged with presenting excerpts from Andre Gide's book Le Retour de L'U.R.S.S. at one of the meetings (not all the defendants participated in this particular meeting). In fact, contrary to the claims of the security structures, there was no organized resistance group. It was a loose framework of intellectuals, who tried to continue the cultural practice of private intellectual exchange that they had been used to in independent Latvia, and that was their main crime in the eyes of the security services. In fact, they were two circles of friends who grouped around the painter Kurts Fridrihsons (1911-1991) and the translator and philologist Maija Silmale (1924-1973). Both were strong personalities, who stood out in the depressing atmosphere of the cultural life of post-Second World War Riga. They had a deep interest and knowledge about French culture, and Western culture in general, and were unable to and did not try to adapt to the new Soviet cultural environment, with its explicitly anti-Western position. Among their friends were other people who loved French culture: the poetess Elza Stērste (1885-1976), the translator and lecturer Ieva Birgere-Lase (1916-2002), and the actress Mirdza Lībiete-Erss (1924-2008). Perhaps, this was why the group was later known as the ‘French group’, although not all the people detained in these cases had a special knowledge of French culture. At the beginning of the 1950s, the persecution of the ‘bourgeois’ and especially social-democratic intelligentsia of independent Latvia reached its peak, and the arrests and sentencing of this group were intended by the security services as a warning to all the Latvian intelligentsia that attempting to exist in parallel with official Soviet culture and keep an orientation towards Western ‘cosmopolitan’ literature and art was a crime. Although the files should be viewed with caution, because they were written in such a manner as to confirm the version of the interrogators, they contain an abundance of material about the mood of the Latvian intelligentsia in the post-Second World War years, the still-existing hope that the independence of Latvia would be restored, the attempts to maintain an intellectual life outside the official constraints, and the attempts to learn about cultural life outside the USSR. Today the ‘French group’ is seen in Latvia as a vivid example of intellectual resistance to the Soviet regime. Material from the criminal files is used by academics and authors of biographical books and articles, and in the preparation of documentaries and television programmes.