The Church Building Permit from the Year 1977 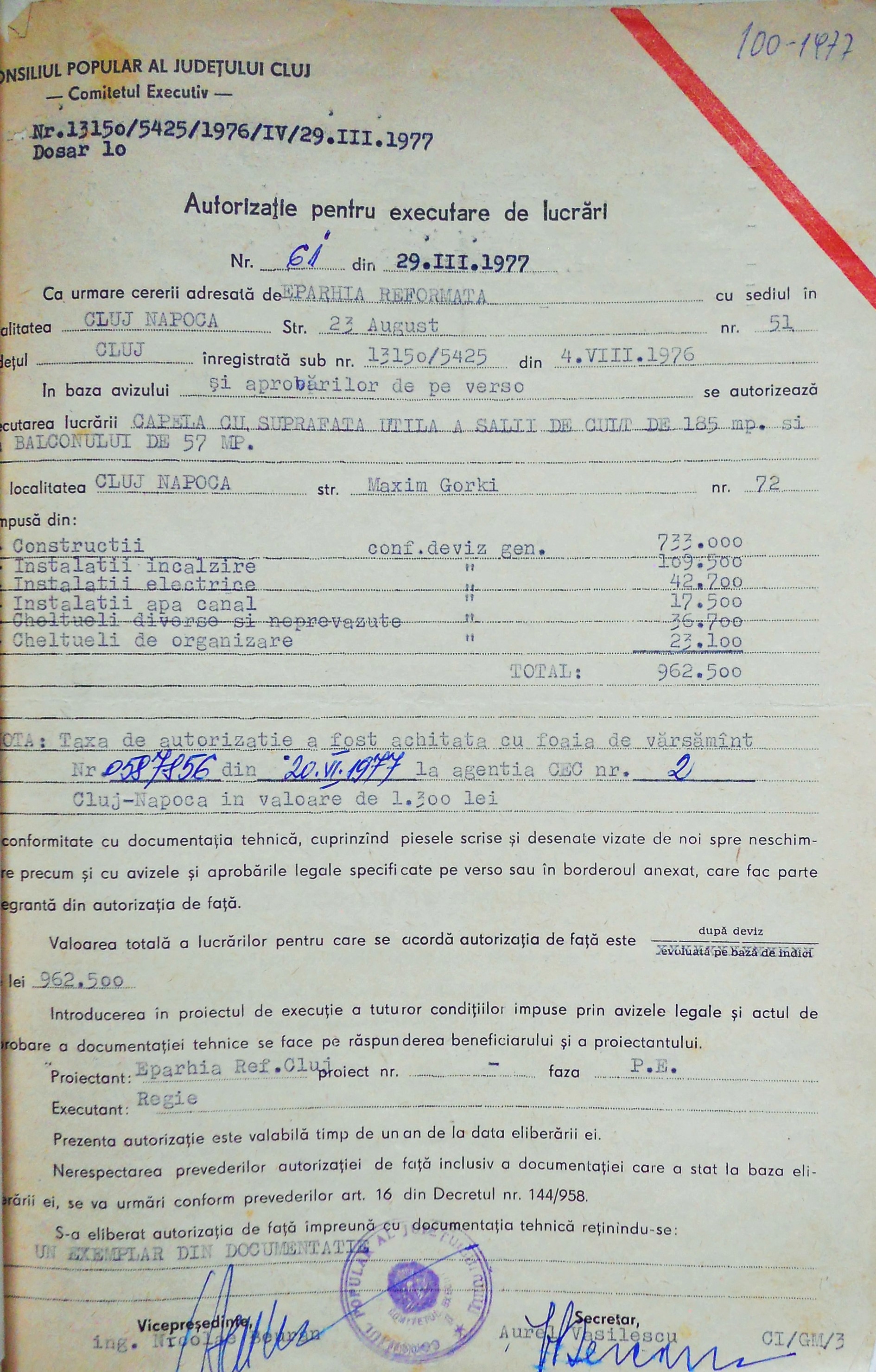 The prelude to the issue of the church building permit of 1977 is at least as interesting as what happened after this. The beginnings of the church construction in Dâmbul Rotund can be related to 14 April 1946, when – on the occasion of the Palm Sunday outdoor church service –, the pastor of Cluj-Hidelve and his church members laid the foundation stone of the Remembrance Church "in front of a large gathering, on the ground of the reformed church of Hidelve, at number 62 Str. Partizan." In 1948 the school–house of prayer was nationalised, but the idea of a church construction was promoted again only in 1956, when, at a presbytery meeting, referring to the construction of the reformed church in the Iris district, Gyula Kis pronounced the request for a church construction for the believers in Dâmbul Rotund. He further explained that the "ground at no. 72 Str. Gorki is perfect for the construction of a church and prayer house" and his proposal for the purchase of the ground was accepted by the presbytery. After the purchase of the ground, they sold the ground on Str. Partizan and moved the foundation stone to the newly purchased ground. According to notes from 1957, the architect Károly Kós drew up plans for a new church, but for unknown reasons these were not used in the end (statement of András Dobri).

The congregation, dreaming of a church and manse, got from 1 April 1969 in the person of János Dobri a pastor, who not only wanted to keep their dream, but also wanted to achieve it. The new pastor considered his primary task to be the construction of the church, as the barrack-building then used for church services had room for only about 120 persons out of a congregation of almost 3,000. Opinions differ concerning the original author of the plans. Different sources name either the building designer dr. Pál Farkas, of Transylvanian origin, but living in Debrecen at that time, or the architect József Finta, born in Cluj and living in Budapest. The plan was adapted by the architect László Nagy in 1969 and Dobri started to organise the church construction works. The Gustav-Adolf-Werk set aside 50,000 deutschmarks for this purpose and the development of the construction work can be followed from 1971 also based on the Securitate agents' reports. In the summer of 1972 Dobri travelled to Bucharest, where he had an audience with János Fazekas, vice-president of the Council of Ministers, who even called in to the debate the head of the Department of Religious Affairs Dumitru Dogaru. But theoretical consent was not followed by action. The approval of the Department of Religious Affairs was subject to the modification of the plans and accompanying documents. Then another impediment arose: the zonal urban plan of the Dâmbul Rotund district had not been drawn-up yet, and consequently patience was required since a building permit could not be obtained before such a plan was issued. One of the officials of the Cluj People’s Council told László Nagy, who was dealing with the case, that even the leaders of the Reformed church did not consider the building of the church to be a priority (ACNSAS, 211500/5).

The seven-year battle with the responsible authorities in Cluj and Bucharest finally ended in success. On 29 March 1977, the Executive Committee of the Cluj County People’s Council issued building permit No. 61, in which they gave their consent to the construction of the "chapel," consisting of a hall of worship of 185 m2 and a gallery of 57 m2 with a total value of 962,500 Romanian lei (KKREL 1977/7, Building permit No. 61). On 24 September 1977, work was begun. It was not only carried out by the members of the congregation of Dâmbul Rotund. Pastors and members of other congregations and theology students helped them, and regardless of their religious and ethnic differences both Hungarians and Romanians, Catholic, Orthodox and Evangelical alike worked here. It was teamwork that meant something important for the people, and showed that even under the communist regime one could obtain little victories. The church constructed largely by voluntary work was finished in 1980 and consecrated on 27 April that year. It was constructed in a time, when the hope that it was possible seemed an illusion. It was named the Church of Hope, because it brought hope to many people in a dark era (statement of Anna Jankó; statement of András Dobri).

According to the original plan the new construction was both church and manse at the same time. The state first granted the building permit only for the construction of the church, which was carried out between 1977 and 1980. Following this they had to wait five more years to start work on the parish building near the church. The obtaining of the new permit was accompanied by difficulties similar to the those experienced with the initial church project. János Dobri began to take steps in May 1982 and they were finally able to start in 1985. With local effort and foreign help the parish building was constructed, including the pastoral residence, prayer room and pastoral office, together with childcare and medical rooms. But this activity was associated with the new pastor András Dobri, who served there from 1 January 1986. The actual completion of the construction is considered to be 18 September 1988, when the second part of the old plan had been carried out as well (Dobri 2014).