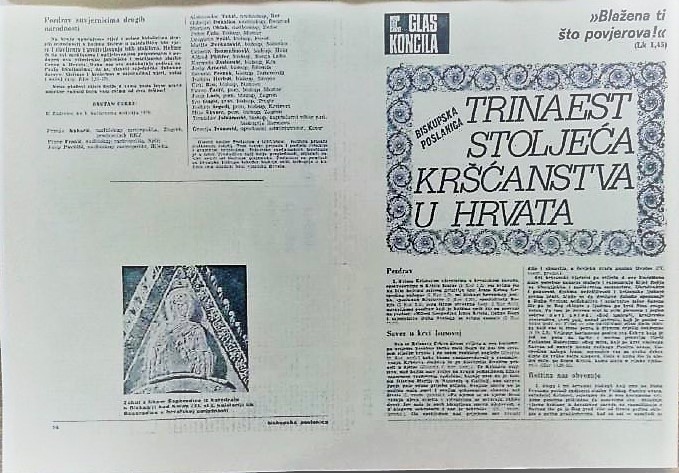 The text of the epistle of bishops entitled Trinaest stoljeća kršćanstva u Hrvata (Thirteen centuries of Christianity among the Croats) was published during Lent in 1976, and it was signed by 23 bishops in Croatia and Yugoslavia. Although its author was not specified, according to the testimony of Fr. Živko Kustić, it is known that it was written by Capuchin friar Tomislav Šagi-Bunić, a prominent theologian in Zagreb and the founder of the theological society Kršćanska sadašnjost (Christian Modernity) (Hudelist 2015, 370). According to Darko Hudelist, it is "one of the most inspired and highest-quality texts ever written in the Catholic Church in Croatia" (Hudelist 2015, 370), a sort of a programmatic text, which served as a guideline for the Church at the time. Although a part of the text was dedicated to (critically examined) Catholic national history, because the reason for the celebration itself was the thirteen centuries of the Christianisation of the Croats, Šagi Bunić directed it to the present time and the future of Christian life following the teachings of the Second Vatican Council. The letter served as an announcement for the celebration of the Grand Jubilee in Solin on 12 June 1976.

Šagi Bunić encouraged believers to live their Christian faith more deeply. However, this automatically meant exclusion from political life under a socialist order, because practical believers could not be members of the League of the Communists of Croatia and thus have careers at higher-level posts.