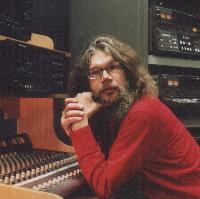 Artūras Barysas-Baras (1954-2005) was an amateur Lithuanian filmmaker and underground rock singer. His main hobby was collecting old and rare books, magazines, vinyl discs, and other things. He was the lead singer with the underground group Ir Visa Tai, Kas Yra Gražu, Yra Gražu (And all of that that is Beautiful is Beautiful). Barysas-Baras became known and recognisable because of his extravagant behaviour and dress. According to Gaigalas, he liked to be the centre of attention, and that is why he was provocative in his behaviour and in his films. He exploited two particular situations in order to escape persecution by the regime. First of all, his father was an employee of the Soviet Lithuanian Council of Ministers. Secondly, he was short-sighted, and so had the status of an invalid. For this, the repressive structures could not blame him for being an unemployed hippie, which allowed him to behave provocatively. Nevertheless, after making the film Jos meilė (Her Love) and showing it at a republic amateur film festival (according to Gaigalas, at the all-Union festival in Bryansk, as well), Barysas-Baras was disqualified from film festivals and was banned from showing films for one year. As he himself recalled, that made him very angry. As he argued, it was the first and only case in all-Union amateur film history that someone was disqualified. In the same year, he made the film Jo ieško (He is under Surveillance) which was, in his own estimation, his best film.

Evhen Batchinsky was born in 1885 in Katerynoslav (later Dnipropetrovsk, now Dnipro) in the Russian Empire. Born into the szlachta, or a legally privileged noble class, Batchinsky attended a military cadet school in Oryol, Russia and the artillery academy in St. Petersburg before serving in the Tsarist army as an artillery lieutenant. He was among the officers with revolutionary aims in the period 1905-1907, advocating for the institution of a constitutional monarchy and federalization of the empire. For this, Batchinsky was arrested and released from military service, serving 10 months in prison before fleeing to France where he lived from 1908 until 1914. Batchinsky traveled briefly to Bukovyna (then part of the Austro-Hungarian Empire) in 1910, where he was arrested and spent three months in jail for agitating for the creation of a Ukrainian university in Lviv. From that point onward, he was under the surveillance of Romanian, Hungarian and Soviet state security services. He then returned to France, before moving to Geneva in 1914, when he also began studying socioeconomics at Lausanne University.

From 1915 to 1917, he was a representative of the Union for the Liberation of Ukraine (Soyuz vyzvolennia Ukrainy) in Switzerland and was editor of La Revue ukrainienne, an official publication of this organization. In 1918, he was made temporary consul of the Ukrainian National Republic (UNR) diplomatic mission in Switzerland, participating in various diplomatic and political activities. From 1919 to 1922, Batchinsky served as general secretary of the Chambre de Commerce Ukraino-Suisse in Geneva founded by Pavlo Chyzhevsky, an emissary of the Ukrainian National Republic, and was editor of its publication, Vistnyk (The Herald). During the interwar period he continued his journalistic activities, and was an accredited journalist to the League of Nations for several Ukrainian newspapers.

In 1939, Batchinsky founded the Central Aid Committee of the Ukrainian Red Cross in Exile, and was its director until 1950, when it was disbanded. Though not officially recognized by the International Red Cross and severely lacking in resources, this organization helped a large number of Ukrainian refugees during and immediately after World War II with advice, documents, and occasional material assistance. Documents Batchinsky prepared helped save a number of Ukrainian refugees from forced repatriation to the Soviet Union. At least three large boxes of materials relating to the Ukrainian Red Cross and the Prisoner of War Post remain at the Ukrainian Museum-Archives in Cleveland.

Alongside his diplomatic and humanitarian activities, Batchinsky avidly collected documentation from this period, amassing a collection that totals 115 linear meters, including 67 meters of manuscripts and other papers and about fifteen hundred serial and monographic publications. As indicated in the finding aid prepared by Carleton University, he acquired these materials in various ways. Some were encountered in his day-to-day administrative functions and preserved organically, while in other cases he sought out personal papers of notable diplomats and representatives of the UNR’s government-in-exile. Evhen sent some of these materials to his brother Leonid Bachynsky in Cleveland, Ohio from the 1950s to the 1970s. Though Carleton acquired most of these surviving materials in 1982, which amounted to one-third of the reunited Evhen Batchinsky Collection, some items remain part of the UMA’s holdings.

Jana M. Bauerová was born in Dačice in 1980 and spent her childhood in Stará Říše in the neighborhood of the Jirous family. She graduated from business school in Jihlava. She works as an archivist at the Libri Prohibiti library, where she is responsible for the estate of Ivan Martin Jirous. In 2004, together with Františka Jirousová, she established the literary group Catholic Decadence. In 2008 she published the poems Northerly Cross, and in 2018 she and Františka Jirousová published their dairy memories of Jirous entitled Mága. 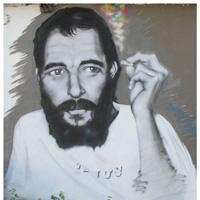 Imre Baász (1941-1991) was a Transylvanian Hungarian graphic artist. Baász was born in Arad on February 22, 1941 to a family of Jewish descent. In 1972, he graduated from the Department of Graphics at the Ion Andreescu Fine Arts University of Cluj as a student of graphic artist László Feszt. At the request of the Kriterion Publisher, he made illustrations for the Kalevala as his thesis work, for which he was awarded the second prize of the Graphic Art Salon of Bucharest. He moved to Sfântu Gheorghe (Sepsiszentgyörgy) in 1977 and began to be active as a kind of one-man institution. He organized workshops in his atelier to introduce local artists and art lovers to modern ideas. As an artist, he mainly thought about the survival of the Hungarian minority living in Transylvania. His art is draws on Expressionist traditions, and it is related to Conceptualism and the action art. In 1981, Baász organized the exhibition “Medium I.” for international contemporary works. In 1986, he initiated the exhibition “Bird Action,” and in 1987-1988 he organized the exhibition “Drawing-Space-Form.” In 1990, he launched the AnnArt performance-days, which he organized until his death. In 1990, he began serving as the scenographer of the Hungarian theater in Cluj (Kolozsvár). In 1990-1991, he taught as a member of the faculty at the Academy of Fine Arts in Bucharest. In 1991, he organized the “Medium II” exhibition.

Orsolya Baász (1980) is a Transylvanian Hungarian graphic artist. She studied at the Academy of Fine Arts in Bucharest. She is the daughter of Imre Baász and Pálma Baász-Szigeti, and she is also the curator of her father's collection.