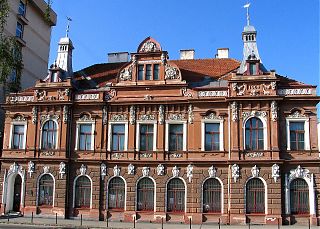 Braşov Art Museum is one of the key museums in Braşov, visited both by the local public and by foreign tourists. The museum is made up of two parts: the National Gallery (a permanent exhibition) and a section for temporary exhibitions. The first part gathers items created by renowned artists in Romania, such as Nicolae Grigorescu, Ștefan Luchian, Nicolae Tonitza, and Hans Mattis Teutsch. The museum is the repository institution of more than 4,300 pieces of art created in various periods, from the sixteenth century to the twentieth century. The National Gallery focuses on illustrating the evolution of Romanian art, particularly Transylvanian art during the modern and contemporary periods. The second part of the museum hosts the temporary exhibitions organised by Braşov Art Museum in collaboration with other cultural institutions and associations or artists. The institution is administratively divided into the Art Section (Secţia Artă), responsible for the preservation and public promotion of the cultural heritage of the institution, and the Administrative and Financial Department, responsible for administrative activities.

The museum was officially founded in 1949 as a section of the Braşov Regional Museum. However, the first permanent art exhibition of the museum was opened in February 1950 in the historic building of the Braşov City Hall. In 1970, this art section (of the institution which in the meantime had become the Braşov County Museum) was moved into a historic building erected in 1902 in a neo-baroque style, which today hosts Brașov Art Museum. The latter became an independent institution in June 1990, when it separated from the Braşov County Museum. After 1990, the museum asserted itself as one of the most active cultural institutions in the city of Braşov.