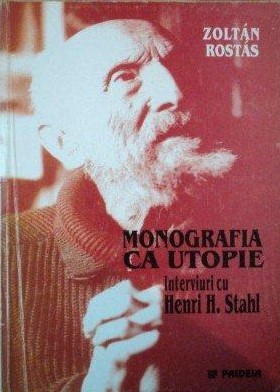 This publishing project is dedicated to Henri H. Stahl (1901–1991), one of the few thinkers of Marxist orientation in interwar Romania and one of the most well-known collaborators of Dimitrie Gusti, who is considered the founder of Romanian sociology. A multidimensional intellectual, with interests in the fields of sociology, ethnography, cultural anthropology, and social history, born into a family of Alsatian-Swiss origin that was nevertheless perfectly integrated into the pre-communist cultural world of Bucharest, H.H. Stahl saw his career interrupted after 1948 due to the marginalizing of sociological research under communism. As he himself put it: “We all came to the conclusion that the Romanian school of sociology, or, as I have come to call it more recently, the school of Romanian sociology, was assassinated. It didn’t die of natural causes. Our careers were cut short.” Based on interviews carried out by Zoltán Rostás with H.H. Stahl in the 1980s, this project has special importance precisely because it recovers the memory of the discipline of sociology in interwar Romania. How great were the changes in the discipline after the coming of communism to power may be deduced from the following evaluation made by H.H. Stahl: “Well, everyone knew that they wouldn’t succeed through their intellectual qualities, but through the political, administrative positions that they could obtain. The ones who were better regarded were those with social activity. Very few who were book people, who were devoted to learning. […] Especially because there was a time when there was such a great lack of people who could be used, confidently, by the Party, that they appealed to whoever could be found. So, two sorts of people enrolled: plain crooks, placemen, without any kind of faith, who were made use of in that period, and a whole series of very good chaps, who realized that they couldn’t work effectively, do their job, if they didn’t also have Party activity, who believed in communism, really believed.”

In carrying out this project, Zoltán Rostás did not intend to say: “the truth at last,” but to “introduce the experiment in cultural history, specifically in the history of sociology, in the hope of discovering some hidden mechanisms of creation” (Rostás 2000, 5). Behind this book lie some dozens of hours of recordings, according to the methodology of oral history, extending over a period of three years (1985–1987). The discussions between the two interlocutors lasted, on average, 90 minutes. “I remember that after an hour had passed, or an hour and a half, Mr Stahl’s wife would come to us and signal that her husband was already tired. That wasn’t at all the case: he would have liked to have continued. But Mrs Stahl was extraordinarily protective with her husband,” recalls Zoltán Rostás. Some discussions, he also recalls, ended independently of the wishes of the people in the Stahl family home: the electric power was cut, and did not come back until the next day, a commonly encountered situation in Romania in the 1980s. The audio version of these interviews can be found on a series of tapes in the private collection of Zoltán Rostás. The book that resulted from these interviews, Monografia ca utopie: Interviuri cu Henri H. Stahl¸ is the book with the greatest public impact out of all those published to date by Zoltán Rostás. Published in 2000, the volume can be found in the libraries of relevant faculties in Romania and is one of those most frequently requested by readers. “In the end, this volume is the first evidence of the fact that a project undertaken as a hobby, thus without official support and academic assistance – indeed without prospects of publication – could be carried out in the direction not of an ‘objective history’ but of an alternative history of the Sociological School of Bucharest” (Rostás 2000, 7).