The travelling exhibition Rizikové faktory: Sbírky kulturní opozice (Risk Factors: Collections of cultural opposition) was held in the National Memorial on the Vítkov Hill in Prague, from 26 September to 28 October, 2018. Exhibition was organized in cooperation with the National Museum, which provided a really valuable space for exhibition. National Memorial is often visited by tourists and locals, it’s a place where excursions of the primary and secondary schools are regularly held, and official state ceremonials are organized. The COURAGE travelling exhibition was completed in Prague by some rare artefacts borrowed from the Libri Prohibiti Library and from collections of the Czechoslovak Documentation Centre deposited in the Archive of the National Museum, such as a unique model of the Apartment theatre of Vlasta Chramostová created originally in Sweden, or original mimeograph machines and samizdat volumes. 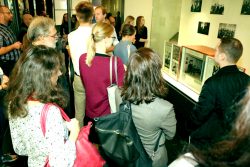 The opening ceremony of the exhibition was attended also by stakeholders of collections and some protagonists of the era. After a short introductory word, Miroslav Michela took a commented walk in the exposition and emphasized the connections between the exposed artefacts and stories and the COURAGE online Register.

According to the official statistics of the National Museum, exhibition was visited by 2379 people. 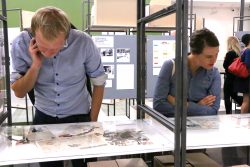 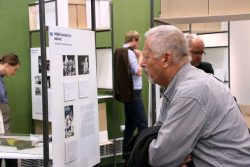 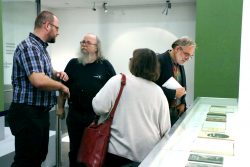