COURAGE at the Sarajevo History Fest

In 1968, students protested in Belgrade, Zagreb and Ljubljana, but also in Sarajevo. During
the work on collections about cultural opposition in Socialist Bosnia and Hercegovina, Edin
Omerćić and Jacqueline Nießer had the idea to dedicate a multi-media presentation to this
event at Sarajevo’s Second History Fest. 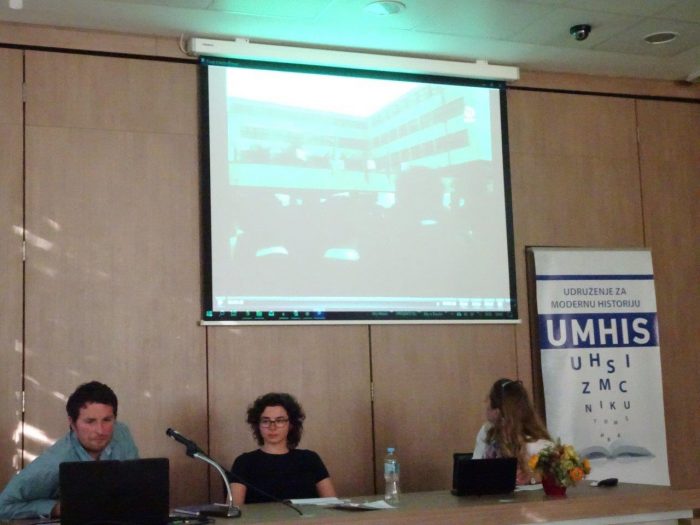 The festival took place from 31 May through 3 June 2018 and was organized by the “Association for Modern History” led by Prof. Husnija Kamberović. In four days about 70 historians from the region of the former Yugoslavia, Germany, Austria, France, Russia, the US and China created more than 20 public events: book presentations, panel discussions and talks, an exhibition and a film screening by the non-conformist director Lordan Zofranović.

The Sarajevo History Fest is a unique event in Bosnia and Herzegovina bringing together different generations of researchers on Yugoslav and Post-Yugoslav history. This year’s edition was dedicated to several anniversaries: 140 years after the Berlin Congress 1878, 100 years after the foundation of the first Yugoslavia in 1918, 70 years after the Tito-Stalin split in 1948, and 50 years after the student protests of 1968.

During the panel on 1968 which was moderated by the COURAGE researcher in Bosnia and Herzegovina, Edin Omerćić, Jacqueline Nießer presented the COURAGE project and Aida Ramić provided historical information about the student protest in Sarajevo. The Archive of the Bosnian Television contributed original video shots by the State Security Administration of Yugoslavia documenting the protests. BHRT also covered the festival interviewing many historians.

The Sarajevo History Fest entirely happened outside the university, in important cultural institutions of the Bosnian capital. The garden of the Country Museum, built Austro-Hungarian times, staged for instance book presentations in an idyllic green setting. Also the other venues represented Yugoslavia’s manifold history, and Sarajevo’s rich cultural heritage in particular, like the finely decorated halls of a former Turkish bath, now housing the Bosniak Institute, the Art Kino „Meeting Point“ and a Youth Centre in the socialist concrete
bloc atmosphere of New Sarajevo.

When asked “What remains of Yugoslavia?” in one of the roundtables, Marie Janine Calic concluded “culture”. COURAGE contributes to document, present and connect the cultural heritage of Socialist Yugoslavia within a European context.