Report of the MSSR KGB on Radio Free Europe/Radio Liberty, 1972 (in Russian) 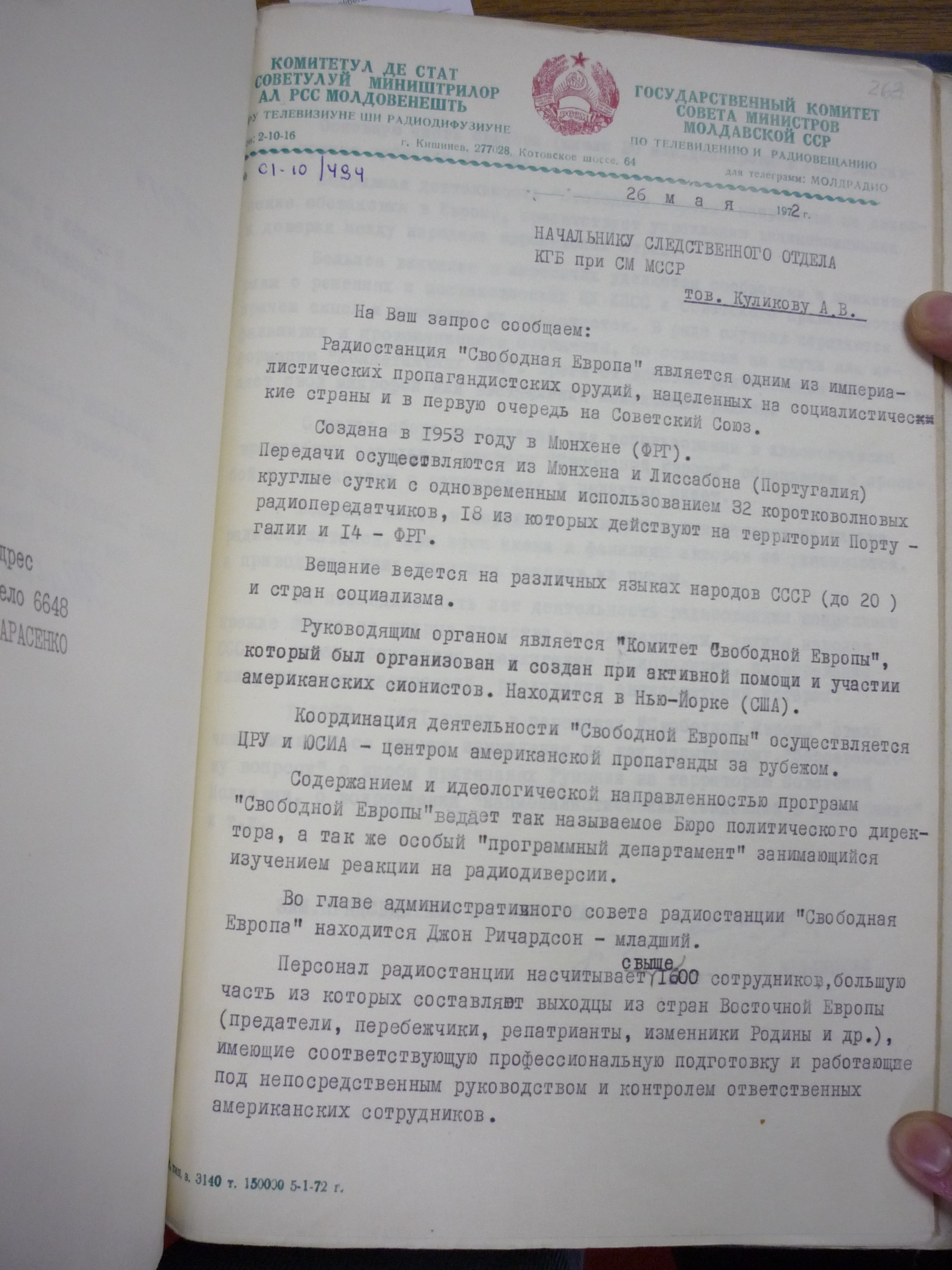 This document is an internal informative note addressed by the Deputy Chairman of the Moldavian KGB, F. Krulitskii, to the Head of the Enquiry Section of the KGB, A. V. Kulikov, and dated 26 May 1972. This item was produced in the context of the intentions expressed by the members of the Usatiuc–Ghimpu–Graur group to send a number of the documents produced by the organisation to the RFE/RL headquarters in Munich. The radio station is labelled as “one of the imperialist propaganda tools” aimed at the USSR and the “socialist camp.” The note analyses the organisational structure of RFE/RL, and emphasises that its employees “originate from various East European countries ([being] renegades, defectors, repatriated persons, traitors to the Motherland etc.”). The document states that the bulk of the RFE/RL annual budget (approx. 20 million US$) is provided by “CIA subsidies.” It is clear that the Soviet secret services were alarmed by the impact of RFE/RL broadcasts on the population of the USSR and the satellite states, while the radio station’s “subversive activities” were taken rather seriously. Describing the content of the broadcasts and the operational procedures, the KGB official notes that “during the last five years” (i.e. since 1967) RFE has intensified its activities, aiming to ‘subvert the unity, cohesion, and friendship between the peoples of the USSR and those of the socialist countries, foment nationalism, incite tendencies towards emigration, and spread anti-Soviet hysteria.” Specifically, the document asserts that during 1968–1971, RFE/RL broadcasts were paying increasing attention to the “Bessarabian question,” mentioning Romania’s “purported claims to the territory of Soviet Moldavia and the rebirth of nationalist tendencies within the [Moldavian] republic.” These trends provoked the apprehension of KGB officials, which partly explains the harsh sentences meted out to the Usatiuc–Ghimpu–Graur group and the repression against “local nationalism” that intensified throughout the USSR during the early 1970s. The document also points towards the sensitivity of Soviet officials concerning the international context and the USSR’s image abroad.