Decision of the Presidium of the Supreme Court of the Moldavian SSR Concerning the Case of Gheorghe Zgherea. 9 June 1955 (in Russian) 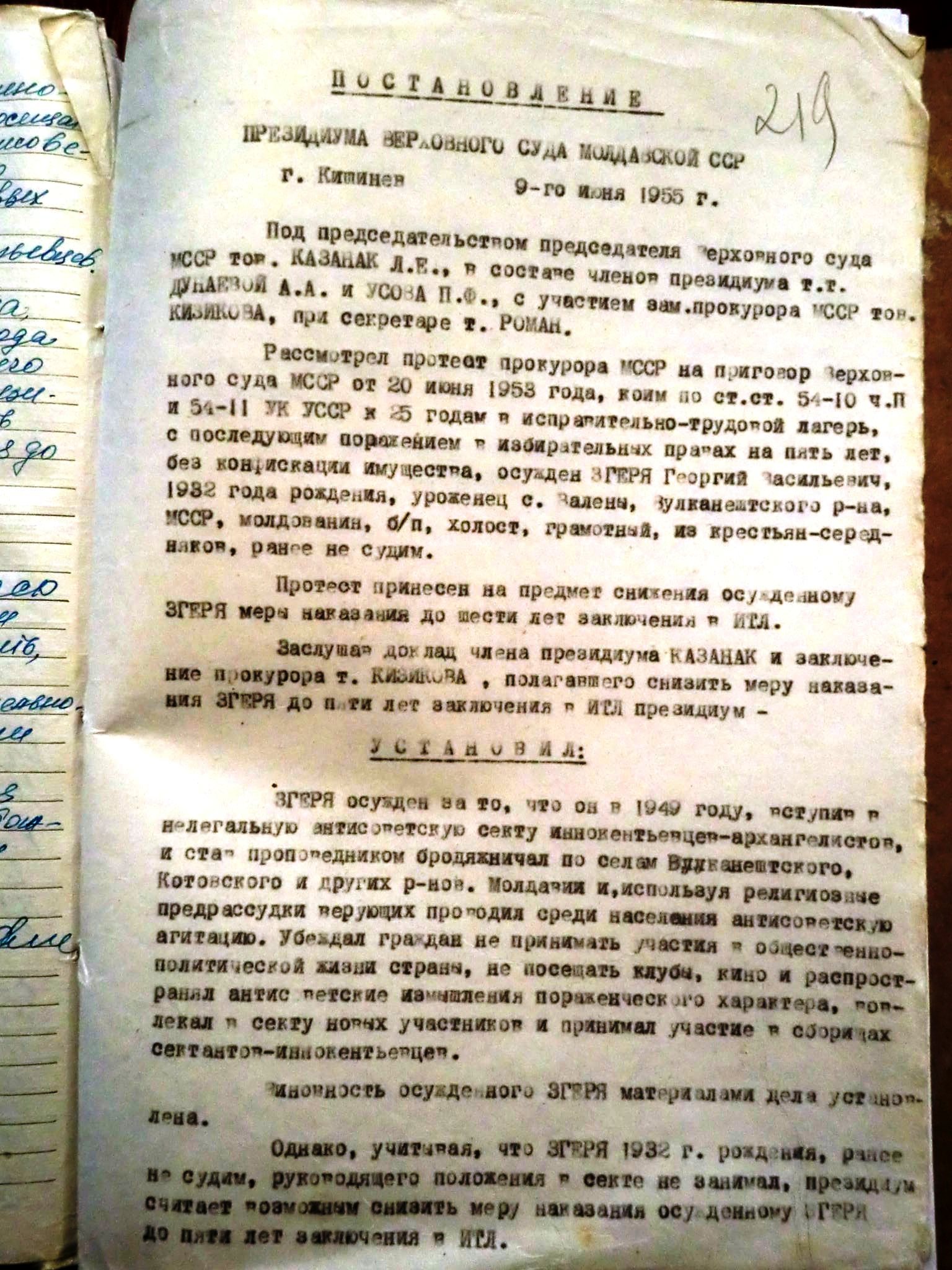 Almost two years after his condemnation, in the spring of 1955, Zgherea filed a petition addressed to the General Prosecutor of the Moldavian SSR, requesting the revision of his sentence. In this petition, Zgherea again admitted his guilt, but emphasised that his conversion to Inochentism was mainly caused by the influence of his parents. He claimed that, due to his young age and to the unsatisfactory level of his education, he did not fully understand the implications of his actions at the time. He also declared that, during his detention in the labour camp, he “fully realised the mistaken nature of his views” and therefore was ready to “cut all his ties to the sect of the Inochentists.” This remarkable example of repentance and apparently successful “re-education” should not be taken at face value, especially given the fact that during the trial Zgherea refused to abjure and renounce his faith. However, in the post-Stalinist Soviet context, this proved an effective strategy for alleviating his plight and for receiving a reduction of the sentence and, ultimately, a full amnesty. In his review of Zgherea’s case, one of the employees of the MSSR’s Ministry of Internal Affairs, Major Rogachev, noted the defendant’s partial admission of guilt and his apparent repentance as alleviating circumstances. In the Resolution he sent to the General Prosecutor of the MSSR, A. Kazanir, on 28 April 1955, Rogachev concluded that, although Zgherea’s “guilt” was not in doubt, the punishment was “too severe and did not correspond to the seriousness of his actions.” Therefore, Rogachev recommended that the prosecutor’s office file a formal protest to the Presidium of the Supreme Court of the MSSR in order to request a revision of Zgherea’s case, which the prosecutor did in due course. As a result of this protest, after reviewing the case, on 9 June 1955 the Supreme Court issued a special decision which reduced Zgherea’s sentence to five years of hard labour and a further three-year suspension of civil rights. The main argument of the court was that Zgherea “did not have a leading position within the sect.” This motivation points to a shift in the authorities’ perception of the social danger of the Inochentists and similar religious movements and to a more differentiated approach to the individual guilt of their members. Moreover, Zgherea was amnestied according to the provisions of the Decree of 27 March 1953, which ended the main wave of Stalinist repressions and secured a legal basis for the gradual release of political prisoners. He was to be released from the labour camp as soon as possible, while his penal conviction was dropped. This case certainly did not illustrate an entirely new attitude of the regime toward religious dissent, which continued to be viewed with suspicion and repressed. However, there was a marked shift in the authorities’ repressive strategies, which became subtler and more differentiated. The case of Gheorghe Zgherea is thus a fascinating example of essential ideological continuity uneasily combined with changing methods of addressing and dealing with dissent and opposition in the religious sphere.