The Records of the Presbytery Meetings of the Honterus Evangelical Parish in Braşov, 1977–1983, in German. File 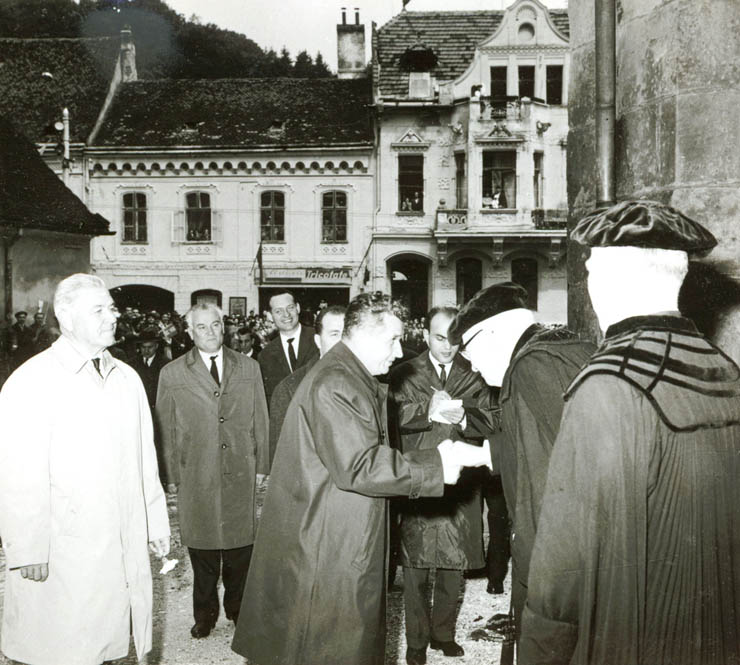 The volume made up of the records of local presbytery meetings in the period from 1977 to 1983 reflects the difficulties faced by the parish of the Honterus Evangelical community in the restoration of the Black Church. Using the 1977 earthquake as a pretext, Ceaușescu dissolved the Directorate for Historic Monuments (Direcţia Monumentelor Istorice) because it had previously been opposed to demolishing the Enei Church in Bucharest, a historic monument from the eighteenth century (Panaitescu 2012, 224). After the dissolution of this institution, which had been responsible for financing and coordinating the restoration of historic monuments, the restoration of the Black Church was interrupted. Because of the complex restoration works which had been started, the church could no longer be used by the community. The record of the presbytery meeting of 27 January 1979 reflects the discussions of this management forum after it was informed by the High Consistory of the Evangelical Church of Romania that the restoration funds granted by the state had been stopped. At this meeting the presbytery members discussed the strategy that the community should adopt. It was decided to draft reports addressed to the authorities underlining the importance of the Black Church, one of the largest Gothic buildings in South–East Europe. Also, the architect Schuller proposed to send the authorities documentation including photographs of the construction scaffolding around the Black Church in order to emphasise the danger for the city’s population of stopping the works (Black Church Archives and Library, Presbyterium Protokolle 24 /1977–1983, 7).
After state funding was stopped, the curator Otmar Richter initially requested the financial support of the High Consistory, the management forum of the Evangelical Church of Augustan Confession of Romania. Because the church lacked the financial resources to continue the restoration project from internal sources, it resorted to private donations and obtained the support of the Evangelical Church in the Rhineland (Federal Republic of Germany). Richter visited the board of the Evangelical Church in the Rhineland in the autumn of 1981 and obtained the financial backing to continue the restoration works. The fact that the regime tolerated this initiative can be explained by the importance of economic relations between Romania and the Federal Republic of Germany, but also by the foreign debt crisis which meant the authorities wanted the foreign currency donated by the Evangelical Church in the Rhineland to be spent in Romania and to enter the national budget.
In addition to the records of the meetings of the Honterus parish presbytery, this file also includes historical and technical documents drafted by historians and architects concerning the structure of the building and its evolution in time. These documents were used in making decisions about the technical solutions to implement in the restoration process in the period 1981–2000. The documents of the volume describe one of the key moments in the Black Church restoration process, when the radical change of the Ceaușescu regime’s policy concerning historic heritage endangered the local initiative started in the 1930s, whose purpose was to save one of the most important monuments of the historic heritage of the city and of the community. The fact that the Black Church restoration was successfully resumed illustrates the existence of the grey zone of tolerance which local communities could use to promote their own interests, even when these conflicted with the official communist policies.