Report at the First Congress of the MWU by Andrei Lupan, in Russian, 1954 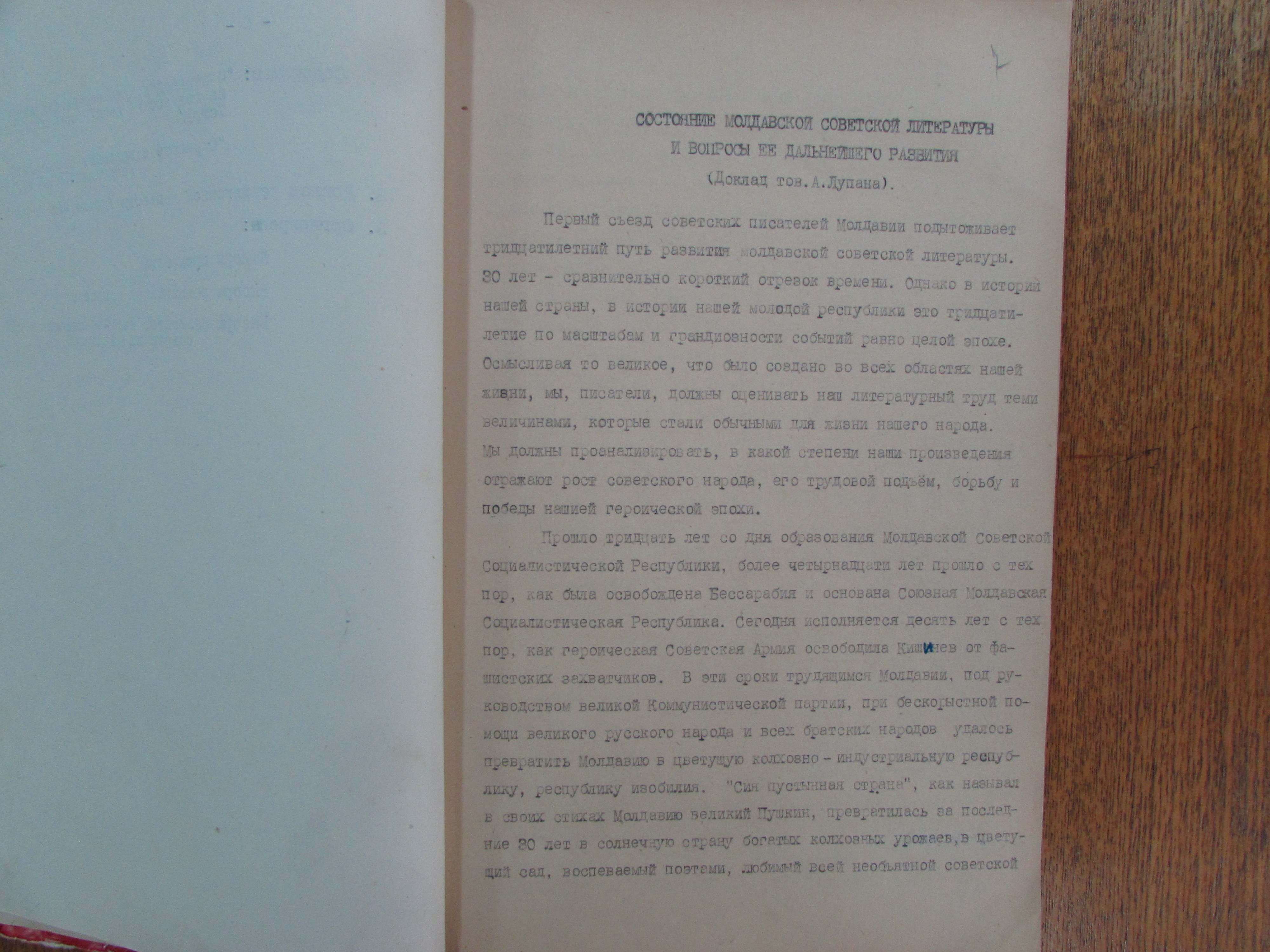 The Congress of the MWU held in 1954 seemed an unlikely place for raising controversial issues, while the chairman of the Union, Andrei Lupan, seemed an even more unlikely candidate for that. Lupan’s social and ideological background was irreproachable from the regime’s point of view, while his literary credentials were superior to those of many of his colleagues due to his education in interwar Romania. He generally supported the “Bessarabian” camp within the MWU and contributed to the improved quality of the literary output produced by its members, but his closeness to the regime was also indisputable. This ambiguity characterised Lupan’s entire career, and he was attacked by representatives of the “1960s generation” during the late 1980s for his political opportunism and failure to act on behalf of his colleagues persecuted by the regime (see Masterpiece 2). However, in 1954, just after Stalin’s death and in the as yet uncertain climate of the emerging “thaw,” Lupan openly tackled the issue of the classic literary heritage in one of the first public discussions on this topic. This question was controversial mainly due to the “common literary heritage” that Romanian and “Moldavian” culture shared. In the first post-war years, the Soviet authorities attempted, albeit with less vigour, to continue the “Moldavian” nation-building project launched in the MASSR in the interwar period, which postulated the existence of a separate “Moldavian” nation and culture. This also presupposed the construction of a distinct standard language, as well as the rejection of cultural and literary figures deemed “un-Moldavian” and linked to Romanian “bourgeois nationalism.” However, starting from the mid-1950s, the “common cultural heritage” of “Moldavian” and Romanian culture began to be emphasised by the “Bessarabian” faction. This was in line with other similar cultural battles waged on the Soviet periphery, such as those of the Tajik / Persian and Karelian / Finnish affinities. Still, the issue of “classic heritage” was primarily a stake in the internal struggle within the MWU between the “Bessarabians” and the “Transnistrians,” with the former supporting the partial rehabilitation of the traditional Romanian cultural canon and the latter adamantly opposed to it. The central institutions in Moscow sided with the “Bessarabians,” thus securing their final victory. In his report, Lupan mentions, first, the success of the project aimed at publishing the “classics” (among whom he included figures whose works had already been published, like A. Donici, C. Negruzzi, I. Creangă, C. Stamati, M. Eminescu, but also other prominent writers not yet fully included into the ”Soviet Moldavian” literary canon, e.g., V. Alecsandri, A. Russo, I. Neculce, D. Cantemir, A. Mateevici – all hailing from the historical Moldavian Principality). However, besides the customary criticism of “bourgeois nationalism,” Lupan also openly admitted that “our classic literature is intimately historically connected to Romanian literature,” being “a common treasure for both peoples.” This bold statement, given the context of the era, was supplemented by his criticism of “distortions and lack of clarity” that could result in “erasing our cultural heritage.” Lupan’s reference to writers such as George Coșbuc, Alexandru Vlahuță, and Ioan Slavici (coming from outside the “Moldavian” geographical area) as part of this heritage is especially striking. He harshly criticised an article published earlier in the official newspaper Sovetskaia Moldaviia (Soviet Moldavia), which tried to “appropriate” Eminescu exclusively for “Moldavian” culture, denying the common cultural heritage with Romania. Lupan’s position was clearly approved by the centre, signalling Moscow’s changing attitude in this regard. Lupan contrasted the “national dignity” purportedly fostered by the rehabilitation of the classic heritage to the “cosmopolitanism and [bourgeois] nationalism” reviled by the Soviet regime, but still found that the publication of the classics “will assist in the development of our literature, in solving the most complicated questions of the Moldavian literary language, will contribute to the enrichment and polishing of our language.” Finally, Lupan was clearly advocating the revision of the literary standard according to the model of “classic literature,” i.e., according to the Romanian model (without, of course, stating this explicitly) and condemned excessive “folkloric” influences. All these opinions had hardly been acceptable several years before. In fact, Lupan’s speech indicated a fundamental shift in official policy, which was to culminate with the total “rehabilitation of the classics” and an effective return to the Romanian literary standard in 1957. This case also shows that revisions in cultural policies on the Soviet peripheries, customarily associated with Khrushchev’s Thaw, were in fact initiated immediately after Stalin’s death, in 1954. The combination of local cultural battles with central signals, openly visible in Lupan’s speech, is what makes this example especially interesting. This case also highlights the generational and ideological contrast with the Perestroika period of the 1980s. As the controversy and open conflict between Lupan and Grigore Vieru shows (see Masterpiece 2), although the issues at stake remained similar, their interpretation was starkly different in the two periods. Beyond the similarities in substance, the generational and ideological conflicts of the 1980s signified a new and radical stage in the internal dynamics of the MWU and in its position toward the regime.