Materials and minutes of the session of the Ideological Commission on the culture sections of daily papers and Radio Zagreb, 1961 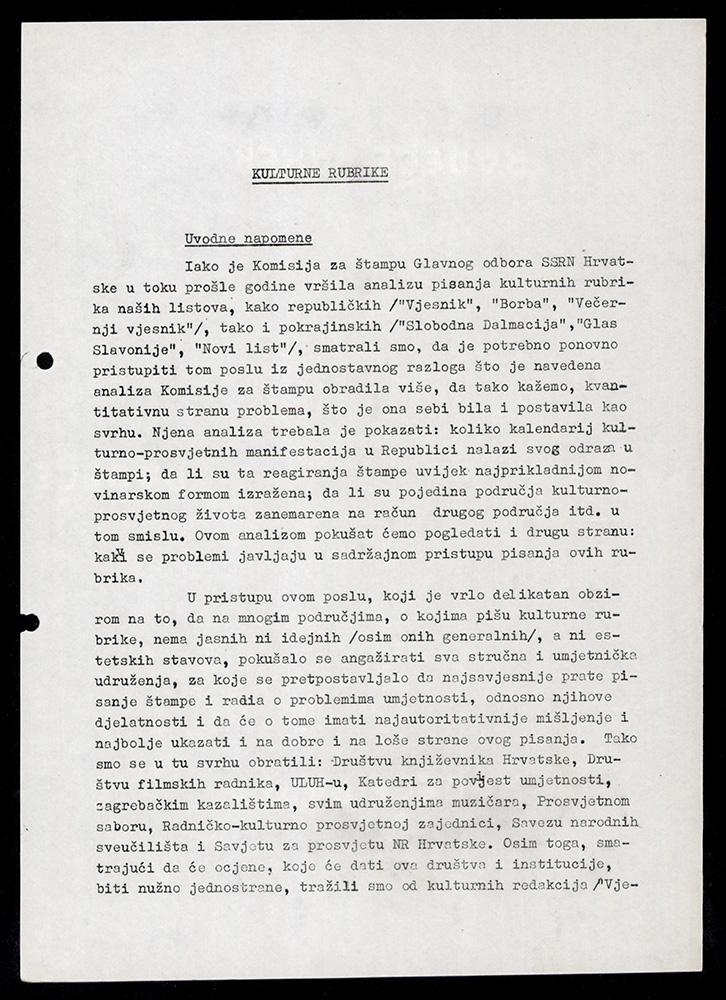 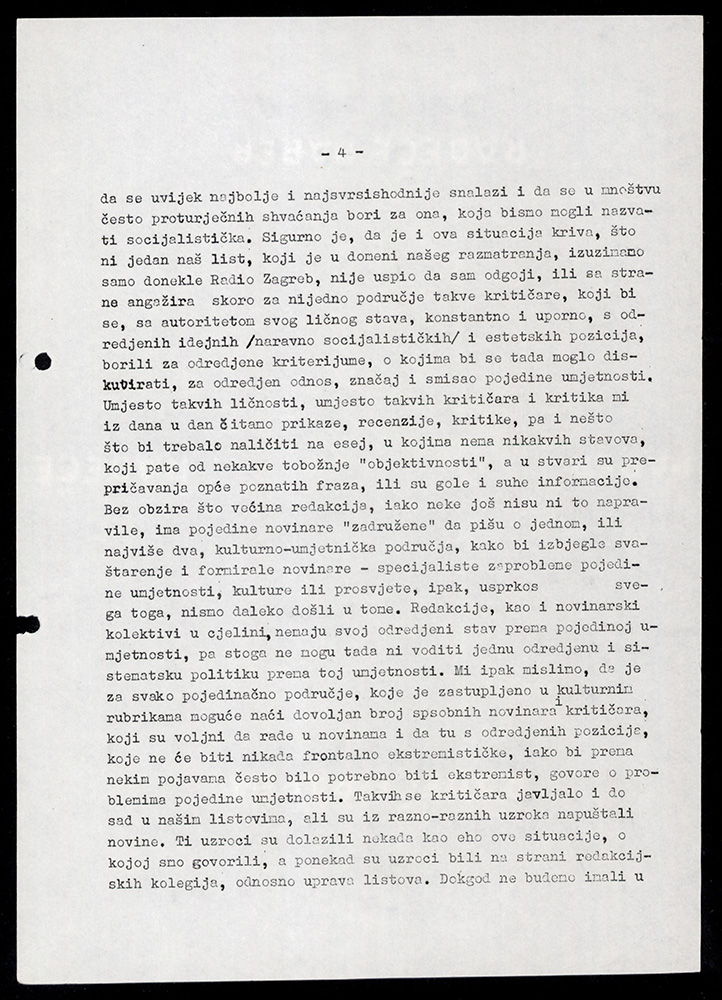 The described materials are an example of the jurisdiction of the Ideological Commission and present its activities in the field of press and radio. In the preparatory materials for the session, a number of daily newspapers (Vjesnik, Borba, Večernji vjesnik, Slobodna Dalmacija, Glas Slavonije, Novi list) were analysed in general and then the coverage and quality of the topics and also the criticisms of theatre, film, literature, fine arts, music, education, adult education and cultural-mass work were specifically examined. The materials were then discussed at the session itself. It is important to note that the session was also attended by writers of the cultural columns of the aforementioned newspapers, thus directly addressing the criticisms and guidelines for future work.

The editorial boards of the newspapers were criticized for considerable ambiguity and vagueness in the field of culture and the arts and were asked to hire journalists specializing in a specific field of the art who would write from the socialist standpoint. Also, the members of the Ideological Commission believed that the press was pro-Western and uncritically served texts from the foreign press (an example after Camus's death, when "the press wrote a great deal, but without the trying to put the writer in his proper place in the literature, and especially given his socio-political position in the life of contemporary France"). Cinema sections were criticized for only transcribing descriptions of foreign films from foreign editions and writing sensationalist pieces about movie stars and movies, indulging the tastes of the widest audience (the blatant adulation for to the film "Some Like It Hot," for example). The Commission wanted the direction of writing to turn more toward achievements in the USSR and India, which the Commission’s members called "advanced directions and attempts" and the "struggle between old and new understandings." Film criticism, it was believed, should first and foremost provide a preliminary ideological rating of the film and take into consideration its social role.

Also, the Censorship Commission hardly permitted a tourist documentary for the domestic market, although not for the overseas because it is " bourgeois and shows our circumstances."

The members of the Commission also had a role as censors, which is shown by the example of Ivan Šibl, who excised a text by Nela Eržišnik from a television magazine because her work was considered "babbling of the most petit bourgeois kind." It should be said that "bourgeois" in the communist view implied a wide range of behaviours that deviated from the proclaimed one and which retained the characteristics communists associated with civil society traditions. That term, in fact, became an insult to whomever it was applied. For example, many things were in principle deemed as expressing the "petit bourgeois mentality": from greetings on the street such as "sir," "gentlemen," "kiss the hands," "m'lady," etc., instead of "comrade," through the use of protection and privilege, "hierarchical gathering," criticisms, servility toward foreigners, corruption and drunkenness, to more severe offenses and crimes.

In literary criticism, there was a call to change the way in which books by domestic authors are covered – so that criticism affectionately welcomes the works of domestic authors just “as it greets a multitude of works an often problematic foreign origin.”. As to art criticism, the view was expressed that genuine art criticism does not exist in the press, but that there were numerous problems: the professional, moral and creative quality of the critics, the ambiguities of aesthetic criteria and the issue of educating the artistic taste of the audience.

Although the document does not mention the persons who did not act in line with the required ideological course, it is an important indicator of the existence of cultural influences and activities in variance with  what was accepted and therefore unsuitable for the LCC Ideological Commission, which often criticized them. By 1995, the document was, along with the other records of socio-political organisations, a part of the Archive of the Institute of History of the Labour Movement of Croatia/Institute of Contemporary History. That year, in July, it was turned over to the Croatian State Archives (CSA) where it is kept today. The documents are accessible for use without any restrictions.