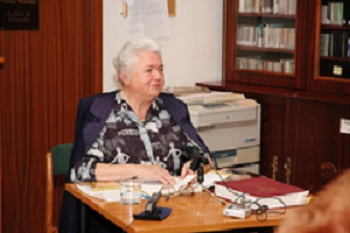 Margit Tóth was born in Budapest, on 20 June 1920.
She was a Hungarian musicographer, pianist, and folk music researcher. She joined the Cistercian Order after graduating college in 1945.
She studied under Zoltán Kodály at the Franz Liszt Academy of Music, where she received her degree in 1956.
Between 1951 and 1963 she was László Lajtha's colleague in his research group. She assumed leadership of the group following Lajtha’s death in 1963. Tóth collected religious folk music, folk songs, and prayers with Lajtha and Zsuzsanna Erdélyi.
Tóth began working at the music department of the Museum of Ethnography in 1964.
In 1970 UNESCO asked specialists to process the folk music of developing countries. Tóth joined their team and travelled to Egypt to research Copt music. While most Hungarians were denied passports during socialism, Tóth frequently travelled to Cairo to research the texts of the Liturgy of St. Basil. From the 1980s onward she taught music at the Academy of Music in Cairo. In 1998 her book, The Coptic Orthodox Liturgy of St. Basil: with complete musical transcription, was published in English with Arabic translations.
She died on 15 November 2009.