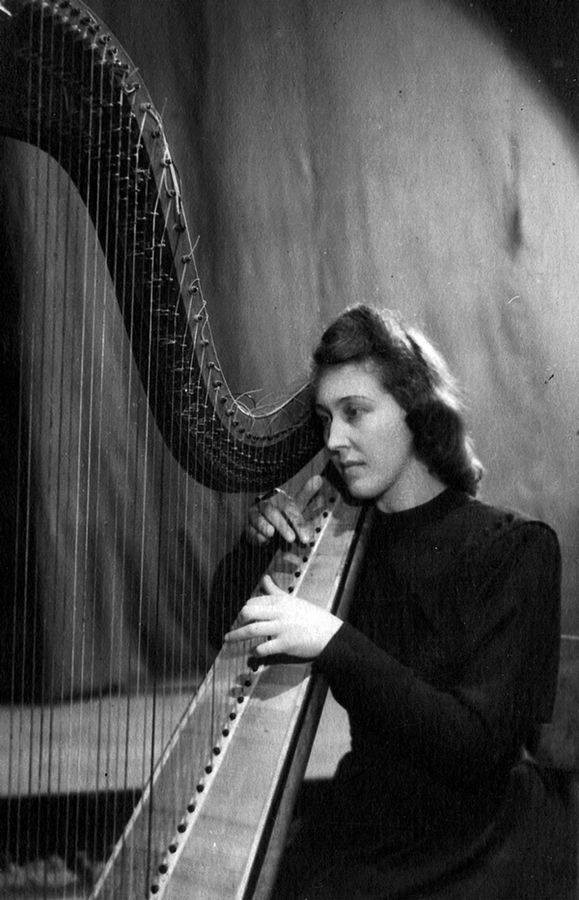 Viktoriya Poltaryeva was a harpist, born in 1919 in the town of Romny, Poltava guberniia (now Sumy oblast), into a Cossack noble family. Sometime during the civil war that followed the October Revolution, the family moved to Leningrad, where Poltaryeva’s father cultivated her musical talents. She matriculated to the Leningrad conservatory to study piano, although after hearing the harp played at the Mariyinsky theatre, she began training with the renowned harpist, professor Mykola Ivanovych Amosov. Her father did not survive the Stalinist purges, he was arrested in Leningrad in 1937, transported back to Romny where he was executed. The surveillance of Amosov by the state security organs prompted Poltaryeva to move to Moscow, where she continued her studies of the harp under Ksenia Erdeli.

The start of World War II resulted in her moving again, this time to Yerevan, Armenia, where she was invited to play as a soloist in Rashid Beibutov’s jazz orchestra. Poltaryeva returned to Moscow in 1944, where she graduated from the conservatory, before being sent along with thousand of cadres to western Ukraine in order to establish Soviet rule. She worked initially at the Lviv philharmonic while also teaching music at a local school.  As Lviv’s only harpist, she was in high demand and quickly assimilated into the local music scene, befriending local composers, artists and intellectuals. She even met Metropolyt Andriy Sheptytsky before his death in 1944.

At the end of 1945, Poltaryeva was arrested by the state security services due to her correspondence with friends abroad, including politicians, musicians and other figures. Her family background also figured in her arrest. She was held at the Prison on Lonskogo St. for 9 months, while her case was being investigated, during which time she and nearly 40 other women embroidered together a handkerchief, each with her own unique design and initials. Her case file was destroyed most probably, as researchers have been unable to locate it in either local state security archives or those in Kyiv. Her son Petro conveyed that a war tribunal reviewed her case in 1946 and pardoned Poltaryeva, after which the musician returned to work and had a long and very successful career both playing the harp and teaching.