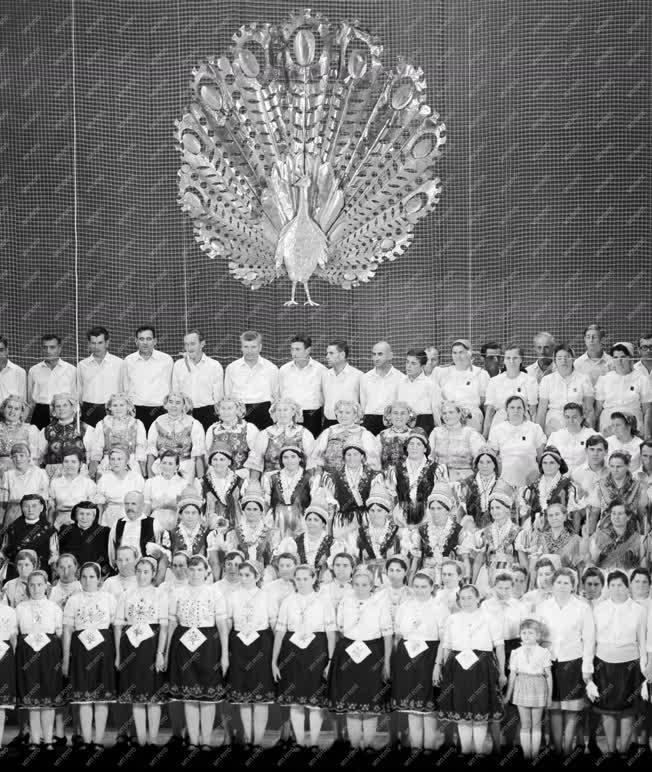 The "Fly Peacock” folk song competition was the antecedent of the folk dance house movement. It was organized by the Committee of the Ministry of Culture and the KISZ Central Committee and declared by the Hungarian Television. It became famous and had social effects. Hungarians admired their own folk culture, and all around the country, many choral societies were founded. The "Fly Peacock" was presented in Hungarian Television. The editor of the program was Miklós Lengyelfi.
The first "Fly Peacock" folk song competition was organized 21 September 1969 in Sopron. The competition was popular from the beginning, and 6000 people applied for it. 79 singers and 12 choirs were presented on television. The final show was held on 29 March 1970. During the semi-finals and finals, people could hear many well-known and less famous folk songs. After the first competition held in 1969-70, there were three more: in 1973 the Aranypáva [Golden Peacock] international folk song competition where there were folk bands, in 1977-78 where groups from all around the country presented their folk crafts too. The last "Fly Peacock" was in 1983. In the Folk Dance House Archive, one finds posters of every competition.
Under socialism, the regime used peasant culture and wanted to present it as a foundation of socialist culture. The main aim of the political system was to fill the folk culture with socialist elements. During the Rákosist era it was stronger; however, the Kádárist era was a bit different. The political system allowed people to show an attachment to traditional peasant culture which was not influenced by socialism. As the result of “Fly Peacock,” the Hungarians recognized their own folk culture. The younger generation discovered peasant culture, and this peasant culture became the base of the urban revival movement in the 1970s.
Halmos, Béla, and Ferenc Sebő started working together from 1969. They created artifacts of genuine Hungarian folk culture. They got wise to the fact that the Hungarian people do not know their own culture. In 1969, they started to learn folk songs. and that same year they entered the competition to be a bird in China. "Fly Peacock" as it were. Halmos and Sebő presented their common performance, and Halmos also presented his solo performance. Halmos won with his solo performance. Thanks to “Fly Peacock,” folk culture became popular and helped further the organization of the first dance house in 1972, Budapest.