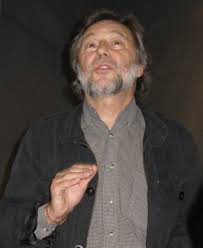 Włodzimierz Staniewski was a student of Polish Studies at the Jagiellonian University and later at the University of Wroclaw. As a student he joined Krakow's Theatre STU. He worked with Grotowski's Laboratorium theatre in 1971-1975. Before founding his own theatre centre, he had travelled extensively throughout eastern Poland in the 1970s. His ethnographic research trips were aimed at finding a new, natural environment for creativity, and at creating theatre in which the line between pop and elit culture would be mingled. In the 1980s he organised a number of international symposia attended by representatives of the humanities and theatres around the world. He also gave lectures, i.e. at the U.S. universities, in Dallas, New Hampshire, New York, as well as Mexico City and the Theatre Academy in Paris.