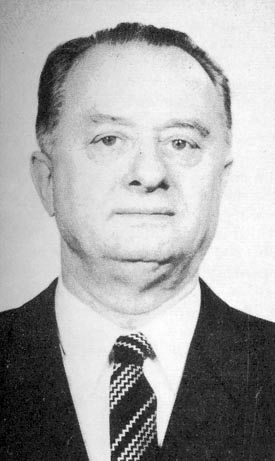 Gyula Ortutay was both an ethnographer and politician.
He was born in Subotica, Serbia, in 1910. His parents were Ilona Borsodi and István Ortutay, a journalist and editor of the Szegedi Napló. Following secondary school Gyula Ortutay began his academic studies at the University of Szeged. He studied Greek and Latin, and graduated in 1934. He was a founder of the Artistic Youth College of Szeged [Szegedi Fiatalok Művészeti Kollégiuma]. In 1935 he began work at the Hungarian National Museum. Later, in 1944, he joined the Hungarian Radio [Magyar Rádió]. During his carrier there, working with Patria audio publishers, he organized several ethnographic recordings with László Lajtha, Béla Bartók, and Zoltán Kodály. He wrote about these works in his diary. They recorded folk tales, folk songs, folk customs, religious songs, and also helped performers travel to Hungary. He launched his political career in 1943 through his contact with communist intellectuals. He served as Minister of Religion and Education between 1947 and 1950. While his political role gained importance, he also worked as an ethnographer and folklorist. In 1949 he presented the speech, “A magyar néprajztudomány elvi kérdései” [Theoretical Questions of Hungarian Ethnography], which defined the role of Hungarian ethnography in the socialist era. From 1951 Ortutay served as the Head of the Folklore Department at Eötvös Loránd University. Between 1949 and 1956 he was also the chairman of the Hungarian Ethnographic Society, and later, between 1957 and 1963, was the rector of Eötvös Loránd University. He was one of the most important academic figures of Hungarian folklore during the socialist era; he supported folklore collections and research, and highlighted the importance of informative work. He curated a very popular series for Magyar Radió, the Kis Magyar Néprajz [Little Hungarian Ethnography].

He was married to Zsuzsa Kemény.

Gyula Ortutay edited several ethnographic journals, including Ethnographia and Acta Ethnographica.
He kept a diary between 1938 and 1977. It was edited by Tamás Ortutay and published in 2009–2010. It offers important reflections on the scientific life of ethnography during the Rákosi and Kádár eras, and also presents a private perspective on the historical changes that took place in Hungary.