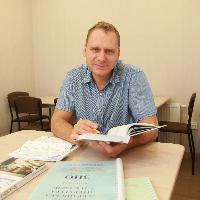 Oles Obertas was born in a family of Ukrainian dissidents Evhen and Nina Obertas. He is a philologist and the author of numerous publications on the Ukrainian dissident movement and Ukrainian samizdat, including the monograph Ukrains’kyi Samvydav: Literaturna crytyka ta publitsystyka (1960 – pochatok 1970 rokiv) (The Ukrainian Samizdat: Literary Criticism and Journalism, 1960s – early 1970s). He obtained his PhD in philology from the Shevchenko Institute of Literature, the National Academy of Sciences of Ukraine. Obertas was the first director of the Museum-Archive and Documentation Centre of Ukrainian Samvydav in Kyiv, taking the most active part in classifying and archiving Smoloskyp collections after their relocation in Ukraine. As the director of the Museum-Archive, he organized a series of international exhibitions and conferences, promoting Smoloskyp collections. In 2004, under his guidance, the Museum-Archive joined the International Samizdat Research Association (ISRA), an informal network of over twenty research institutions and archives, studying and preserving samizdat collections. 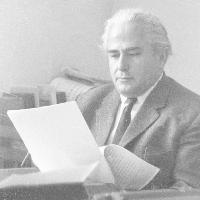 Born in 1911 to a Bulgarian family in the village of Tresonche in Macedonia (then Ottoman Empire, today Republic of Macedonia), Hristo Ognyanov grew up in a region with an ethnically mixed population. This region was contested by Bulgaria, Serbia, Greece and the Ottoman Empire. After the Balkan Wars, the village was included in Serbia. Hristo Ognyanov graduated from the Serbian elementary school in Tresonche, but was forced to interrupt his education and worked as a servant in various places in Skopje. In 1926, he left for Stara Zagora in Bulgaria, where he graduated from the National State School in 1932, while working in the building sector. During this period, Ognyanov joined communist circles, at the same time becoming a member of the Macedonian Youth Organization "Gotse Delchev". This was the time when his interest in literature formed. He started writing poems, collaborated with Eho, Svetulka [Firefly] and other magazines.

In 1932, Ognyanov became a student of law and state economics at the State University in Sofia. Influenced by his brother, he joined the Internal Macedonian Revolutionary Organization (IMRO) and became a member of the Secretariat of the Union of Macedonian Youth Cultural and Educational Organization. He also joined the Macedonian Student Society "Vardar". These organizations were banned after the May 1934 coup d'état. In 1936 Ognyanov became volunteer assistant of the journal Obzor, “a weekly for politics, literature and public life”. Under the pseudonym "Ognyan", he wrote feuilletons and pamphlets, mainly devoted to national issues, especially on the Macedonian question. He opposed the idea of an independent Macedonian nation and language. He also published poetry.

In 1937 Ognyanov graduated from higher education and started working as an attorney-at-law. At the same time, he became reporter for one of the most prestigious Bulgarian newspapers at the time, Zora. In 1939, he printed his first poetry collection Yuzhni vetrove [“Southern Winds”], which was well accepted by the critics. In the same year, Ognyanov was accepted as an auxiliary member of the Journalists' Society and won a Humboldt Scholarship for studying international law in Germany. This coincided with the outbreak of the Second World War. Ognyanov was sent as a correspondent of the Zora newspaper in Berlin. In Berlin in 1940, he married his long-time partner Margarita Hristakeva. In January 1944 Hristo and Margarita Ognyanov moved to Zagreb, where Ognyanov became the secretary of Ivan Mihaylov. I. Mihaylov, head of IMRO, was closely related to German and especially Italian intelligence, and supported the idea of creating an autonomous Macedonian state or a "Macedonia attached to Bulgaria". In Zagreb, Ognyanov compiled his second poem collection "Pateshestvia. Stihotvorenia [Journey. Poems]".

In the middle of September 1944, days after the establishment of the new power in Bulgaria, Hristo Ognyanov managed to reach Vienna. His wife Margarita, though, remained in Bulgaria. After several years of unsuccessful attempts by Ognyanov to withdraw her to Austria, they divorced. IMRO was declared by the new regime a "fascist organization" and its agents – "enemies of the people". Ognyanov was convicted by the People's Court because of his “active fascist and pro-German activity" in absentia. He was also excluded by the Society of Metropolitan Journalists.

In Austria Ognyanov enrolled at the Insbruck University and married the opera singer Inge Mueller. Led by his patriotic views, in 1951 Ognyanov went briefly to Rome for service for Ivan Mihaylov, making research in archives and libraries for the "Macedonian Bulgarians". He recorded the memories of Ivan Mihaylov and other figures of the pro-Bulgarian Macedonian nationalist movement. In 1952 he was invited by the head of the Bulgarian department of The Voice of America in Munich (Alexander Dimitrov) to work at this radio, becoming responsible for the Bulgarian issues. In 1956 Ognyanov was sent to a one-year specialization at the headquarters of The Voice of America in the United States. There he also worked for the Macedonian Tribune newspaper, an organ of the Macedonian Patriotic Organization (MPO) in the United States, and as a lecturer in Bulgarian language at the Syracuse University. In the United States, he joined the circles of Bulgarian political émigrés and developed broad publicist and cultural activities.

In the 1960s Ognyanov began working for Radio Free Europe. There he led numerous programs on the history of Bulgarian literature and culture, in which he presented authors and their work that were banned by the communist authorities. In parallel, Ognyanov began the series "Bulgarian Literature under Communism", in which he critically assessed current developments and events in Bulgaria. He tried to reveal the lies of party propaganda. Among his wide activities were reviewing books and critically presenting articles from the Bulgarian press and broadcasts from Radio Sofia. Ognyanov’s program "Eleven Centuries of Christianity in Bulgaria" received an award by The Catholic Broadcasters Association of America. Under the name "Religion and Atheism in Bulgaria under Communism," he delivered a series of lectures in 1974. In Bulgaria, Ognyanov's activities, including those on religious subjects, were considered by the authorities as "subversive propaganda".

In 1965, the "Petar Beron" Bulgarian Academic Society (BAS "Petar Beron") was established in his home in Munich, with the purpose of uniting Bulgarian scholars working in the West. The society launched the book series "Schriftenreihe zur Bulgarienforschung" and organized numerous conferences. In 1981, in connection with the 1300th anniversary of the Bulgarian state, the society organized cultural events also in the US and Canada. Ognyanov was also a member of EXIL-P.E.N. Zentrum der Schriftstellerinnen und Schriftsteller im Exil in den deutschsprachigen Länden (Centre of Writers in Exile in the German-Speaking Countries). Ognyanov, thus, played an important role in unifying Bulgarian political emigrés, working closely with people from different generations, such as Petar Uvaliev (pseudonym Pierre Rouve, who worked for the BBC in London) as well as the younger émigrés of the 1970s, such as Dimitar Bochev, Dimitar Statkov, and Georgi Markov.

After the political changes of 1989 Ognyanov returned to Bulgaria many times; he was awarded the Madara Rider order, the third most important decoration awarded by the Republic of Bulgaria. His poems and essays were now finally also published in Bulgaria.

Ognyanov passed away in Salzburg, Austria, in 1997.

Petko Georgiev Mihaylov-Ogoyski was born in Ogoya village on 1 November 1929. He studied in his native village, started a high school education in the town of Svoge, moved to Sofia and graduated from the 5th Sofia Male High School in 1948. In 1949-1950 he was on compulsory military service, but in March 1950 he was arrested for the dissemination of political appeals. Ogoyski was sentenced to five years in prison for "enemy poems and conspiracy", and served the sentence in conditions of extreme in various prisons and in the First and Second Object of the Belene Forced Labor Camp on Persin Island. After his release in 1953, due to serving the sentence, considered in working days, he served his soldier service. As a former political prisoner, Ogoyski was allowed to work only in manual industrial jobs. He worked in agriculture, as a drilling worker at state enterprises, and construction painter.

In 1955 Petko G. Mihaylov-Ogoyski married Yagoda Petkova Danova-Yusova from the village of Chepintsi, in 1956 was born their first son Petko; in 1959 – their daughter Maria.

In this period Ogoyski began a history study at the Faculty of History and Philosophy at the Sofia State University, but his graduation was thwarted by his repeated condemnation of "enemy verses" and imprisonment in 1962. After the discharge from prison in 1963, he became a member and chairman of the literary club at the house-museum “Yavorov” in Sofia, which was purged in 1970 after two of its members, Ogoyski’s friends, escaped to the West.

In 1966, the third child of Petko and Yagoda Ogoyski – a son, Hristo, was born. In the 1970s and 1980s, Ogoyski was a painter and worked in a storehouse in which he became a “chief warehouse of paints and tools”. In his free time, he conducted local ethnographical research. Ogoyksi became a member of the Sofia regional literary society and of the Union of the Regional Ethnographers (kraevedi). Some of his texts critical of the regime were published in newspapers and magazines under pseudonyms such as Mitso Gitsin, Petko Murgashki, Dragoslav Bratski, Yaroslav Persinski.

After the collapse of the communist regime in 1989, Ogoyski was among the founding members of the restored Bulgarian Agrarian National Union “Nikola Petkov”, which became part of the Union of Democratic Forces, the main anti-communist coalition consisting of several political organizations. In 1990 Ogoyski was elected member of the Seventh Grand National Assembly of Bulgaria (from 10 July 1990 to 2 October 1991), which adopted the new Constitution of the Republic of Bulgaria. He also became a member of the Union of Bulgarian Writers and of the Bulgarian Historical Society. He was appointed as editor-in-chief of the newspaper "Zemedelsko zname" ["Agrarian Banner'], the daily newspaper of the re-established Bulgarian Agrarian National Union (BZNS) "Nikola Petkov" (1991-1993). Texts of Petko Ogoyski are included in the School Reader "Zabranenite pisateli" ["Banned Writers"], a joint publication of the Hannah Arendt Center, the Centre for European Studies and the Konrad-Adenauer-Stiftung in Sofia in 2013. In 2015 Petko Ogoyski, together with Bulgarian politicians (mayor of Sofia, Yordanka Fandakova; Bulgarian Ombudsman Konstantin Penchev), journalists (Georgi Koritarov), historians (Ivaylo Znepolski, Antonina Zhelyazkova, Valeri Todorov), the writer Georgi Gospodinov, and other public figures was honoured by the magazine “Zaman Bulgaria” for his “contribution to public peace and ethnic understanding in Bulgaria” - http://zaman.bg/bg/vzamanv-vratchi-edinstvenite-nagradi-za-prinos-kam-obshtestveniya-mir/

A biographical study is dedicated to Petko Ogoyski (Ivanova 2012); with a film about him in 2014, the documentary series of the Bulgarian National Television "Open Files" by the investigative journalist Hristo Hristov started.

Valdur Ohakas was an Estonian artist. He studied at the State School of Industrial and Pictorial Arts in 1942–1943, but was called up into the German army in 1943. After that, in 1944–1948, he studied at Tartu State Art Institute, but he did not complete his studies there either. He and others were arrested in 1948 for being members of the Tartu Circle, and sent to a prison camp in Karaganda in Kazakhstan. He was released in 1956. Afterwards, he returned to Tartu and worked as a freelance artist. As a member of the Tartu Circle, he turned to abstract art. In 1959, he became a member of the Estonian Artists' Union.

Attila Olasz was born in 1982 in Szeged. He completed his primary and secondary school studies in Szeged. After leaving the secondary school, he was admitted to the drawing teacher and program organizer department of the University of Szeged. In 2004, he graduated from the University of Szeged. He was then admitted to the painter program of the Art Department at the University of Pécs. He graduated as an artist in 2009. He regularly attends individual and group art exhibitions. His works have been published in various Hungarian magazines and periodicals.
read more
1 - 5
1 2 3 4 next page »»