16 featured items found (New collection descriptions are constantly being added)
Items per page:       1 2 3 4 next page »»
Jack Nickolson with Solidarity badge in Cannes in 1981

This photograph was taken by Jerzy Kośnik during the Cannes Film Festival in 1981.

Kośnik was sent from Poland as a photojournalist. During his encounter with Jack Nicholson he asked for his sympathies for freshly-formed Solidarity movement. When Nicholson responded enthusiastically, Kośnik gave him a Solidarity badge. Actor pinned it on his jacket and wore it through the whole festival. After a film by Andrzej Wajda ("Man of Iron", talking about the beginnings of Solidarity movement) won the Palme d'Or, the photograph gained powerful symbolic meaning.

The photo cost Kośnik his job at the Polish newspaper, but simultaneously it became a symbol of world support for Solidarity. It was adopted by its members to various publications and leaflets.

The symbolism of this photo was used again in the campaign during the first afetr Worl War II semi-free elections in Poland in 1989. Based on Jerzy Kośnik's photos taken in 1989, a series of poster entitled "The stars vote for Solidarity" was produced (with celebrities like Jane Fonda, Natasha Kinski and Grace Jones).

The picture of Jack Nicholson wearing a Solidarity badge was used for advertisement posters and banners during the opening of European Solidarity Centre (ECS) in Gdansk in 2014. 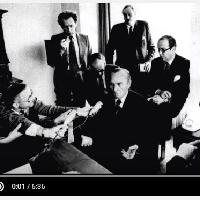 At the InterContinental Hotel in Prague on 1 March 1977, Czech philosopher and dissident Jan Patočka met with Max van der Stoel, the Dutch foreign minister, who was at the time on an official visit to Czechoslovakia. The meeting was initiated by the Dutch journalist Dick Verkijk at a time when the Charter 77 signatories were persecuted and silenced by the police. This was the first official meeting of a Charter 77 spokesman with a foreign political representative who recognized Czechoslovak dissent.

Patočka explained in German to the minister and, through a recording, to the international public, that the aim of the Charter 77 was not to fight against the regime, but to demand the observance of the valid constitution and other laws. A day later, President Gustáv Husák called off official talks with the Dutch minister. Jan Patočka was ill at the time and after this meeting he was subjected to days of interrogationby the State Security. Eventually, on 13 March 1977, he died.

This unique sound recording documenting the meeting between Patočka and van der Stoel was made by Dick Verkijk, who initiated and attended the meeting. The recording is stored in the Jan Patočka Archives, which has also decided to make it public and uploaded it to YouTube.

Dick Verkijk played this sound recording during a ceremonial meeting organised on 1 March 2017, on the occasion of the 40th anniversary of this event, in InterContinental Hotel in Prague. Several high representatives of the Czech Republic took part at the ceremony, including the Prime Minister Bohuslav Sobotka and Minister of Foreign Affairs Lubomír Zaorálek. The ceremony was also attended by, among others, the Vice President of the European Commission Frans Timmermans and by the director of the Jan Patočka Archives Ivan Chvatík. Frans Timmermans stated at the ceremony that the activity of the Charter 77 Czech dissident movement had a significant influence on the fall of the Iron Curtain and the end of the Cold War in Europe.

read more
Jan Patočka. Does History Have a Meaning?, 1975. Typescript

“Does History Have a Meaning?” is the third essay from Patočkaʼs most influential and famous work entitled “Heretical Essays in the Philosophy of History”. This oeuvre, compiling six essays of Patočkaʼs late philosophy of history, is considered by many authors to be Patočkaʼs most original work. “Heretical Essays” was published for the first time in Czechoslovakia as a samizdat in 1975 by Ludvík Vaculíkʼs publication Petlice and by Jan Vladislavʼs publication Kvart. In 1988, this text was published again in samizdat as part of the Patočka anthology “Archivní soubor Patočkových prací”. The first official publication in Czechoslovakia before 1990. Nevertheless, before then many foreign translations of this text had appeared, including the French edition from 1981 with a preface by Paul Ricœur and an afterword by Roman Jakobson. This work was also published in 1980 by the Czechoslovak exile publisher Arkýř in Munich. “Heretical Essays” was written concurrently with the cycle of Patočkaʼs lectures dealing with philosophy of science that took place secretly in Prague from September 1974 to June 1975. According to Ivan Chvatík, these lectures and “Heretical Essays” strongly influenced the Czechoslovak intellectual milieu and made Patočka an “important dissident” in the eyes of the Czechoslovak police. Lectures were initiated by the young Polish philosopher Krzysztof Michalski who had been corresponding with Patočka since 1973 and invited the Czech philosopher to write essays about his phenomenological conception of history for the Polish philosophical revue Znak. However, due to the political situation and censorship, only one of these essays, entitled “Does History Have a Meaning?” could finally be published in Poland (Cf. Jan Patočka. 1975. “Czy dzieje mają sens?” Znak, No. 11–12: 1396–1414, translated by Krzysztof Michalski). This essay is based on a lecture by Patočka in Prague in February 1975, in the atelier of Czech photographer Jaroslav Krejčí. Jan Patočka Archive possesses Patočkaʼs typescript of this essay with handwritten notes and corrections. This original typescript was discovered in 2005 thank to Czech philosopher and Patočkaʼs friend Jaroslav Kohout. 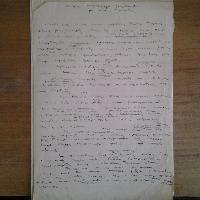 Janulaitis' Letter to the President of the Academy of Sciences of Soviet Lithuania Juozas Matulis, 1946

Augustinas Janulaitis' letter to Juozas Matulis, the president of the Academy of Sciences of Soviet Lithuania, was written in 1946. The historian was attacked sharply by the Party authorities for his 'bourgeois nationalism', and in particular for the pamphlet 'Lithuania and Contemporary Russia', written and published in 1925. In the pamphlet, Janulaitis described very critically the political reality in Soviet Russia. He explained his stance in a letter to Matulis: why he was not 'self-critical', and did not openly recognise or regret his past 'political mistakes'. According to Janulaitis, the best way was just to 'keep silent', because nobody would believe him. On the other hand, he stated that he wanted to sort his collection, and his main aim was to carry out academic research.

Jaroslav Šabata analysed the events of August 1968 and wrote several studies about the occupation of Czechoslovakia. One of them was “The Breakthrough Moment of the Prague Spring”, which he wrote after 1973. This study, in preserved form, also includes an interview with Jaroslav Šabata about the events of the Prague Spring for an unpublished German magazine.

Part of this volume is also an interview with Jaroslav Šabata. The interview was held on 9/8/ 1990 in Brno in the presence of Dr. Vlašánek, Dr. Povolný and Dr. Kavín. Dr. Kavin was invited by Jaroslav Šabata to testify as a significant co-witness. The questions are not explicitly highlighted in the text, but the discussion addressed different themes. They were interested in the political situation in Brno at the turn of 1967/1968, whether Brno participated in the exchange of the leading secretary of the party, and what role was played by the Communist Party of Czechoslovakia (CPC) Regional Organization in Brno and the Municipal Committee of the Communist Party in Brno. Vlašánek and Povolný also asked Šabata about the circumstances and reaction to the adoption of the action program and the meeting with Dubcek in May 1968. It also looked at whether informal initiatives and the seeds of a new social democratic party were at work in Brno. Šabata also reports its CPC policy from January to August 1968. The interviewees also wanted to know what the role of the Vysočany Congress was, and why it did not work until the return of politicians from Moscow. The conversation then continued on August 23, 1990, when Jaroslav Šabata was asked why he was not co-opted into the CPC Central Committee in August 1968, and what was going on with the Czech politicians who were in Moscow. They also wanted to know how Šabata engaged in the Moravian Movement in 1968 and how Jaroslav Šabata generally saw the message of 1968 to today's Czechoslovakia.

Jaroslav Šabata's article "The Breakthrough Moment of the Prague Spring” was a response to the text by Jan Moravec, "Need for a New Initiative" and "Second Center Platform" by V. Biľak". The interview, which is part of Šabata´s study, was conducted in German by Mathias Richter and Inka Thunecke in Brno on 3/7/2004. It contained questions about whether the Prague Spring was the last attempt of Europe to fight for democratic socialism, and whether it was a third position, between capitalism and socialism, what Dubcek's role in this process was, and whether they were inspired by the Hungarian Revolution of 1956. They also talked about the Charter 77 and its position on the ecological movement as well as the nuclear disaster in Chernobyl.

This whole set of documents is a unique testimony of Jaroslav Šabata's views, attitudes and memories of the Prague Spring and the occupation in August 1968, what preceded it and what the situation in Moravia looked like.