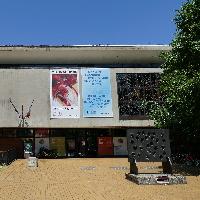 The Museum of Contemporary Art of Vojvodina (MSUV) was founded in 1966 and maintains a research museum approach to the preservation, exhibition and presentation of works of contemporary art of the second half of the 20th and the 21st century, linking the local with the international art scene. Art collections of paintings, sculptures, objects and installations, prints and drawings, conceptual art, film, video and photography, ‘intermedia’ and digital works, architecture, urban planning and design from the late 20th and the early 21st century of Vojvodina, Serbia, as well as the works of foreign artists and art groups can be found in the museum’s collection. In addition, the museum collects, systematizes and preserves a rich library and documentary/archival material on all the main players and phenomena relevant to the history of art in Vojvodina. The MSUV aims to systematically study and reevaluate the history of art of the late 20th and 21st century in Vojvodina, in Serbia and throughout the former Yugoslav region through numerous study, problem-solving, retrospective and monographic projects. It promotes what it considers to be important historical artistic phenomena and personalities through new approaches and methods, while continuously working to educate the public. The task of the museum is to note artistic approaches which have been seriously engaged with, and marginal or alternative courses of art history, at the same time encouraging contemporary production and practice by promoting artists through thematic and solo exhibitions, actions, spoken word programs, workshops, film screenings, music events, etc., intended for professionals and the general public. 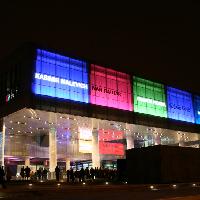 Museum of Contemporary Art in Zagreb

The Municipal Gallery of Contemporary Art, the forerunner of the Museum of Contemporary Art, was founded in Zagreb on 21 December 1954. It consisted of the Contemporary Art Gallery, the Centre for Photography, Film and Television, the Benko Horvat Collection and the Library and Documentation Department, and it also included Meštrović Atelier, the Primitive Art Gallery and the Jozo Kljaković Collection until the latter became independent. The aim of the gallery is to document and promote contemporary art. The gallery was located in Count Kulmer's baroque palace in Zagreb’s Upper Town. Due to the modest conditions of the location, the Museum never had a permanent collection, and it performed its museum-gallery and educational activities by organizing thematic and monographic exhibitions of Croatian and foreign artists. The decision to construct a new museum building was enacted in 1998, and the museum moved to its new premises in 2009.

The cultural role of the institution in the socialist era consisted primarily of the promotion and affirmation of contemporary artists and the preservation of their works. It is the work of the documentation section that resulted in the emergence of the eleven collections that the museum now owns: Collection of Drawings, Graphics, Prints and Art on Paper, Film and Video Collection, Photography Collection, Media Art Collection, Sculpture Collection, Collection of Paintings, the Tošo Dabac Archive, the Kožarić Studio, the Seissel Donation, the Richter Collection and the Benko Horvat Collection. Most of the works from the Museum of Contemporary Art were created in the period of socialism, and some of them are by artists who were active in the cultural opposition. 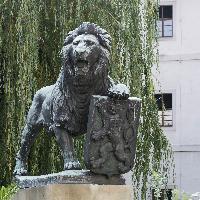 Modelled on Soviet literary museums, the Museum of Czech Literature was established after the government’s decision regarding the premises of the Strahov Monastery in 1953. Besides the preparation of long-term and temporary exhibitions with literary themes, the museum administrated and expanded literary archives, a library and an art collection. Parts of these collections were returned to their original owners in the early 1990s, but the museum was able to justify its continued existence and it now administrates approximately 12% of the national cultural heritage stored in Czech memory institutions. The Museum concentrates on gathering, processing, preserving, researching, and exhibiting sources – paper documents, books, and visual arts – related to the history of literature, literary culture, and the cultural history of the Czech territory from the last third of the eighteenth century to today.

read more
Museum of Ethnography
The Museum of Ethnography was established on 5 March 1872, when János Xántus (1825–1894) was appointed to head the Ethnography Department of the Hungarian National Museum. During the museum’s history, the ethnographical collection, developed from the beginning of the 20th century, was considered one of the finest of the National Museum. Researchers collected every manuscript, object, photograph, film, folk song and other oral text connected with folk culture. Likewise, several researchers, anthropologists and ethnographers who had travelled to foreign countries (Emil Torday and Sámuel Teleki in Africa, Lajos Bíró in New Guinea, Géza Róheim in Australia, Vilmos Diószegi in Siberia and Mongolia) returned and contributed to the Museum's international collections. At the beginning of the 1930s, the Museum of Ethnography supported major ethnographical projects, like the four-volume series The Ethnography of the Hungarians, and the Hungarian Folk Art series. At the end of the 1930s, the Ethnological Archives was established as part of the museum. The Museum of Ethnography itself gained independence from the National Museum in 1947. During socialism, the museum carried out several research projects, like those in Tiszaigar and Átány, where ethnographers could document peasant culture. During the Rákosi and Kádár eras many declassed people worked at the museum, including László Lajtha and Zsuzsanna Erdélyi. The museum's permanent exhibition, entitled “Folk Culture of the Hungarians”, shows the everyday life and festivals of the Hungarian peasantry. The highlights of the exhibition were collected between the end of the 18th century and World War II, from throughout Hungary.
read more
Museum of Fine Arts – Artpool Art Research Center

The Artpool Art Research Center was founded as an art initiative by György Galántai and Julia Klaniczay in 1979 (after 10 years of illegal and 25 years of non-profit existence). Since 2015, it has been part of the collection of the Museum of Fine Arts, allowing the center to work as a separate unit in a well-established environment, with more researchers and a broader scope of operation. According to plans, the collection developed by Galántai and Klaniczay will form part of the Central European Research Institute for Art History (KEMKI), to be set up within the framework of the Liget Budapest Project in the National Museum Restoration and Storage Center (OMRRK) in 2019. The earliest section of the Artpool collection, created between 1965 and 1991, entered state ownership thanks to the Hungarian National Bank’s (MNB) Depository Program. The material accumulated since 1992 was gifted by the founders to the Museum.

The collection of the Artpool Art Research Center documents the history of art movements, trends, and tendencies which emerged beginning in the 1960s, including what is termed unofficial artistic trends (underground, samizdat). The archives’ 650 running meters and 2,300 hours of digitalized materials allow research on some 7,500 artists, art groups, and institutes, extending to virtually every branch of the fine and applied arts. The collection represents a staggering spectrum with an astounding number of artists. Thanks to the documents and works it preserves, Artpool is an ideal place for research, providing insights into the intellectual developments of an era. The Artpool archives is a treasure trove of letters, descriptions of artworks, notes, sketches, concepts, interviews, various writings and works, photo-documentation, catalogues, invitations, posters, bibliographies, chronologies, monographs, periodicals, diagrams, portfolios, and video and audio documents. The diverse material makes research into a wide range of art forms possible, including Fluxus, concept art, performance art, visual and concrete poetry, sound poetry, artists’ bookworks, mail art, artistamp, artists’ postcards, artists’ periodicals, copy art, computer art, video art and ‘public art’, supplemented by documentation about the oeuvres of Sándor Altorjai, Miklós Erdély, György Galántai, Endre Tót, Ben Vautier, G. A. Cavellini, Ray Johnson and Monty Cantsin, among others, only researchable in Hungary in the Artpool archives.

Artpool has had a long-standing mission to connect Hungarian culture with the international art scene and to document the activities of artists in Hungary and elsewhere in Eastern Europe who were placed in marginal positions by official cultural institutions before 1989. In addition to being one of the most important records of non-conformist art practices in Eastern Europe (with documents concerning the progressive, non-official Hungarian art tendencies beginning in the 1970s and the Hungarian samizdat art of the  1970s, and 1980s, including alternative art scenes and groups, contemporary music, underground art magazines, etc.), the archive has a unique collection on international art tendencies and movements from the 1960s on, and it helps further the work of researchers from around the world.

The antecedent to Artpool was artist György Galántai’s Balatonboglár Chapel Studio, which opened in 1970. During its four years of operation, until its termination by the Communist authorities in 1973, the Chapel Studio became the center of “tolerated” and “banned” (avantgarde) art and the “cradle” of a cultural system change. When they founded Artpool in 1979, György Galántai and Júlia Klaniczay made a renewed attempt to create an underground art institute which accommodated the concepts and ideas of new art at a time when publicity was only granted to those following the guidelines of official cultural policy. Between 1979 and 1990, precariously subsisting on the verge of being banned and tolerated, Artpool organized numerous exhibitions and arts events, and it also published and produced many periodicals, anthologies, and albums under “unofficial” circumstances. In 1983–85, the center published 11 editions of the quasi-samizdat art magazine AL (Topical / Artpool Letter), which still serves as the only source material documenting the unofficial arts events of those three years. The objective of Artpool was to compensate for the isolation and lack of information that characterized Hungarian contemporary art at the time, and it also undertook the task of documenting arts events in Hungary that were not in step with the era’s cultural policy and thus were not given any publicity. By collecting documents retrospectively and prospectively, the founders built an archive which will allow future generations of artists and art historians to continue the intellectual and artistic endeavors that were carried out by the artistic generations of the 1960s, 1970s, and 1980s. Initially, the Artpool project was defined as an avantgarde arts archive, which meant that it sought new forms of social action, organized various events, and participated actively in the processes that were going on at the time, while documenting and archiving it all and freely sharing information. Founded on this “Active Archive” concept, the Artpool Art Research Center, which was opened in 1992 as a public institution and operated by its founders for more than twenty years as a non-profit organization and which was first sponsored by the municipality of Budapest and then by the Ministry of Culture and funds through tendering, grew into a scientific institute with an international reputation. Thanks to Artpool’s exhibitions and its network of relations on the international art scene, its documents, artworks, and library grew rapidly, and its collection was enriched by many prominent Hungarian and international donations. Its well-organized archive has been attracting researchers from all over the world. Research conducted here in the past two decades contributed to more than seventy theses and more than twenty PhD dissertations, as well as to the organization of numerous international exhibitions, arts events, conferences and workshops. The printed and online publications and catalogues of Artpool are invaluable educational and research resources.
read more
31 - 35
«« previous page 1 2 3 4 5 6 7 8 9 next page »»