Matica hrvatska (MH) is an independent, non-profit and non-governmental association founded as a society for the promotion of Croatian culture. Due to its rich activity and long life it has become a national institution. As a cultural institution of the Croatian people, it emerged within the framework of the Croatian National Revival in 1842 under the name Matica ilirska. Although originally founded as a publishing house within the Illyrian Reading Room, in the 1850s it became a literary and academic society with the task of promoting cultural, literary, economic, and political goals of the young, nationally aware generation of Croatian citizenship. In 1874 it changed its name to Matica hrvatska.

Matica hrvatska was the most representative Croatian publisher, and has also left an indelible mark on Croatian history to date, participating in its many turbulent events. In monarchist Yugoslavia, it opposed, in the cultural sphere, the state centralism and unitarism of the ruling dynasty. In the first half of the 1930s, Matica became the centre of the Croatian cultural and political opposition, gathering not only nationally oriented authors but also left-wing writers like Miroslav Krleža and Augusta Cesarac as well. In the second half of the 1930s, Matica became the central institution of the Croatian national intelligentsia and soon came into conflict with the Croatian Peasant Party (HSS), the strongest political party in Croatia. After the creation of the Croatian Banovina (in 1939), the authorities led by the HSS imposed the Commission (Komisarijat) in Matica hrvatska in 1941 - a forced administrative measure aimed at supressing political opposition in Croatian Banovina (Aralica 2009). After the establishment of the Independent State of Croatia (NDH), Matica was declared a state institution with a privileged position in the sphere of culture.

After the Second World War, MH continued to work mainly in publishing, which was intensified especially after the establishment of its publishing house in 1960. Although it was funded by the state, and even had its own communist party organization, it began playing an oppositional role in its cultural activity at the time, which led to repression against it and finally to its dissolution. From 1967, when it encouraged the adoption of the Declaration on the Name and Status of the Croatian Literary Language, Matica hrvatska became a mass organization that penetrated into all branches of Croatian society with the aim of raising the national consciousness of Croatian citizens. By organizing various lectures and forums, and most notably through its publications, especially the newspaper Hrvatski tjednik, Matica hrvatska became the central Croatian cultural institution in the Croatian Spring. It became a gathering point of Croatian intelligentsia that was dissatisfied with the position of Croatia within the Yugoslav federation and especially with the treatment of Croatian national identity by the federal authorities. For this reason, the communist government began to see at it as the driver of oppositional political ideas. By the fall of the Croatian Spring in 1972, many of its prominent members were subjected to state repression under accusations of "Croatian nationalism," such as Vlado Gotovac, the editor-in-chief of Hrvatski tjednik who was sentenced to four years in prison. Because of the government's attack on Matica, its board of directors and executive board tendered their collective resignations in 1972. Although Matica hrvatska was not officially abolished, it practically stopped working in that year.

After the fall of communist rule in Croatia, MH renewed its activities and expanded it by establishing its branches throughout Croatia (98 branches), but also in other countries where the Croatian people live: Austria (1), Belgium (1), Bosnia and Herzegovina (13), Germany (3), Hungary (3), Montenegro (1), Serbia (1) and Slovenia (1). MH still stands out for its productive publishing activity, publishing numerous books and three periodicals (Vijenac, Hrvatska revija and Kolo). It also organises various cultural, social and scholarly events on a regular basis (presenting books, organising scientific conferences, lectures, and concerts of classical music). Matica hrvatska regularly commemorates the legacy of the cultural opposition from the time of socialism, mostly the phenomenon of the Croatian Spring, which is also visible from the gatherings it organizes (see for example Zidić 2017) and the publications that it publishes (e.g. the series "Sources for the History of Matica hrvatska"). 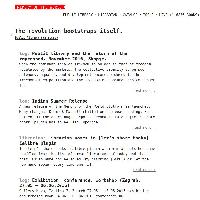 Memory of the World
Memory of the world is a public library project with the primary mission of providing access to universal knowledge.
read more
Фондация “Микрофонд София”

Mikrofond Sofia Foundation (MSF) is a non-profit legal entity working in public benefit for the purposes of development and affirmation of civil society in Bulgaria.

Its main goals are:

The Microcredit Program within the Resource Center Foundation was launched in 1999. The United Bulgarian Bank (UBB) was the strategic partner of the Program that provided the resource for disbursement of loans, guaranteed by Soros Economic Development Fund – New York. The Program targets Bulgarian regions with high unemployment levels, low economic growth, and several distinct ethnic communities.

At the beginning of 2002, the Microcredit program was transformed into Mikrofond-Sofia Foundation.
Source: http://mfsofia.ngorc.net/en/

read more
Ministry for State Security in GDR
The Ministry for State Security was created in 1950. It saw itself as the ‘shield and sword’ of the ruling Socialist Unity Party of Germany. Comprised of 20 departments, it supervised the internal security and external intelligence services for the GDR. It employed almost 100,000 full-time staff in 1989, and over the course of its existence administered more than 600,000 informal collaborators to keep all segments of society under surveillance. The Ministry was renamed the Office for National Security in the system-changing months of 1989, and finally, in March 1990, dissolved.
read more
Ministry of National Cultural Heritage
The Ministry of Cultural Heritage was founded by Act No. XXXXVI/1998, its predecessor was the Ministry of Education. It operated as Ministry of Education and Culture from 2006, as Ministry of National Human Resources from 2010 and as Ministry of Human Resources since 2012.
read more
6 - 10
«« previous page 1 2 3 4 5 6 7 8 9 next page »»