559 organizations and groups found (New collection descriptions are constantly being added)
Items per page:       «« previous page 1 ... 6 7 8 9 10 11 12 13 14 ... 111 112 next page »»
Association of Journalists of Yugoslavia and Serbia
The Association of Journalists of Serbia was founded on 21 December 1881 in Belgrade, the capital of the Kingdom of Serbia, called the Serbian Journalists Association. It is one of the first professional journalistic associations created in the world. It has been working continuously since its inception.
read more

The consortium, founded in 1986, is an umbrella association for networking and project support of more than 250 literary societies and museums. 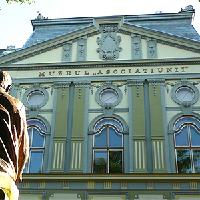 The ASTRA Sibiu County Library is one of the oldest public libraries in Romania. The institution has in its custody a significant number of old books and manuscripts. The ASTRA Library is also the repository of a large number of personal collections donated by Romanian and foreign intellectuals such as Aurel Cioran, Andrei Oţetea, and Eugèn van Itterbeeck. In 1861 the Romanian elite promoting the political and cultural emancipation of the Romanians from the Austro-Hungarian Empire founded the Transylvanian Association for Romanian Literature and Culture (Asociaţiunea Transilvană pentru Literatura Română şi Cultura Poporului Român – or in short ASTRA). Following the model of the Association of the Hungarian Transylvanian Museum (Erdélyi Múzeum-Egyesület), ASTRA was conceived as having a library dedicated to the promotion of Romanian language and culture. Consequently, the acquisition policies of the library were focused on old Romanian books and the current Romanian press. The association also gathered an ethnographic collection which was the ground for the today’s ASTRA National Museum Complex, one of the most important ethnographic museums in South-eastern Europe.
The library of the association was the core for what is currently the ASTRA Sibiu County Library. The ASTRA library played a significant role in forming the national elite and promoting national identity among the Romanians in Transylvania. The first catalogue of books was made during the period when the institution was headed by Visarion Roman, a teacher, journalist, and founding member of the Romanian Albina Bank. Later, Nicolae Petra-Petrescu, a journalist and translator, carried out a reorganisation of the library. In 1905 the ASTRA library was moved into a new building in the centre of Sibiu called the ASTRA Palace. After the First World War the institution benefited from the cultural policies of the Romanian state, which valued this library as a key institution for Romanian culture in Transylvania. In 1923, the Law of Legal Deposit stipulated that all Romanian publishers had to send a copy of their books to several libraries in the country, including the ASTRA Library. Between 1923 and 1949, the library was considerably extended due to this law. When the King Ferdinand University of Cluj was moved to Sibiu as a result of the loss of the northern part of Transylvania following the Second Vienna Award in 1940, the importance of the ASTRA Library increased, as it became the library of one the most important universities in the country.
In the period 1945–1950, the ASTRA library was reorganised in order to become a library dedicated especially to academics. The institution was meant to conserve and to facilitate effective use of its collections of old Romanian books. When the communist regime was fully installed in 1948, the library contained a significant quantity of books in many fields and with diverse ideological content, many of them liable to be censored. Consequently, in the period 1948–1949 many items were forbidden to general public and they formed the so-called Special Fonds (Fond Special) because access to it was possible only with a special permit from the Party structures. In 1990 the Special Fonds numbered13,414 volumes, most of them published during the interwar period. These items dealt with topics such as nationalism, interwar politics, far-right ideology, the Romanian monarchy, works of Romanian writers who had emigrated to the West, or books under the label “idealist philosophy” (which meant in fact everything which was not compatible with Marxism-Leninism). Even the political writings of classic Romanian authors such as Mihai Eminescu were included in this Special Fonds. Nevertheless, even during the communist period the library was open to the general public and this service has developed since 1989. In 2007, when the city of Sibiu was European Capital of Culture, the Sibiu county administration financed the building of a new edifice for the use of the general public, leaving the old ASTRA Palace to house old books and personal collections. Currently, 847,455 items are listed at the ASTRA Sibiu County Library, including books, newspapers, manuscripts, correspondence, photos, maps, medals, audio, and video items.