Official Protest by the Prosecutor General of the Moldavian SSR, 30 December 1988 (in Russian) 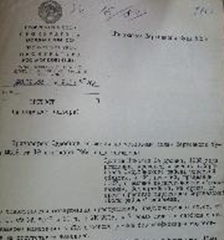 In the context of Gorbachev’s Perestroika and of the ensuing partial rehabilitation of the victims of political repression, the Prosecutor General of the Moldavian SSR, N. K. Demidenko, filed an official protest arguing for the revision of Nicolae Dragoş’s case and for the annulment of his and his associates’ sentence. The protest was based on the petition requesting the revision of the case submitted by one of the accused, Vasile Postolachi. This document is especially revealing for the rather different interpretation of the evidence that was obvious on this occasion, in comparison with the initial conclusions, and for the overwhelming importance of the changing political context in this regard. The protest emphasises that the criminal investigation and the court proceedings did not concretely define “the nature of the defendants’ anti-Soviet activity.” In a remarkable departure from the official sentence, the protest seemed to take seriously the claims of the accused that “they did not aim at undermining and weakening Soviet Power” and that the goal of the organisation was to “criticise the mistakes of the CPSU and to fight bureaucratisation,” thus in fact aiming at “strengthening Soviet power” instead of weakening it. The “inversion” of the earlier stance also resulted from the statement that the witness accounts disproved the official accusations and confirmed the testimonies of the defendants. The document carefully summarises the main ideas promoted by the Democratic Union of Socialists, including their criticism of the one-party system, of the Soviet leaders’ cult of personality, and of the distortions and mistakes in the policy of the CPSU. Their emphasis on restoring the role of the Soviets and on increasing the well-being of Soviet citizens is also evaluated much more favourably than had been the case in the 1960s. This document offers one of the most complete and reliable glimpses into the world-view of the group members, providing a detailed summary of their ideological platform. The Prosecutor General notes that the gravity of the crimes allegedly committed by the defendants did not warrant such a sentence. He admits that the leaflets produced by Dragoș contained “a harsh criticism of a number of institutions of socialist statehood” based on “profoundly flawed views and suggestions,” which stemmed from “a dilettantish and petty-bourgeois approach toward the evaluation of the forms and methods of party leadership.” However, in the prosecutor’s opinion, these activities are not sufficient grounds for accusing the defendants of “committing a state crime.” Although the prosecutor recognises that the spreading of the “tendentious and ideologically flawed” leaflets constituted a serious misdemeanour against the “public interest,” he takes into account the defendants’ open admission of their guilt as a mitigating factor and emphasises that their actions were not subject to the articles of the Criminal Code on “anti-Soviet agitation and propaganda” directed at “dangerous state crimes,” since this charge did not reflect the essence of the defendants’ activities. Consequently, he recommends the annulment of the sentences and the closing of the case against Dragoș and his supporters on the grounds of the “lack of any criminal component” in their actions. Interestingly, the sentence concerning Dragoș’s and Tarnavskii’s condemnation for stealing the printing equipment from Tatarbunar, according to article 81, paragraph 2, of the Criminal Code of the Ukrainian SSR, remains standing. As a result of this protest, on 21 February 1989 the Presidium of the Supreme Court of the Moldavian SSR annulled the main sentence concerning Dragoş’s case and legally rehabilitated him and his associates. The political implications of this and similar cases of “rehabilitation,” which were rather numerous in the late 1980s and early 1990s (e.g., those of Alexandru Șoltoianu – rehabilitated by the Moldavian Supreme Court in September 1990 – , and Gheorghe Muruziuc – rehabilitated in March 1991), point to the changing nature of the Soviet regime and of its definition of meaningful oppositional activity. Dragoș’s case, however, is especially significant, as it is one of the first such instances in the late Soviet context. This was probably due to the more moderate nature of his critical message, which was compatible with the “revisionist Marxist” trends increasingly tolerated during the Perestroika period.